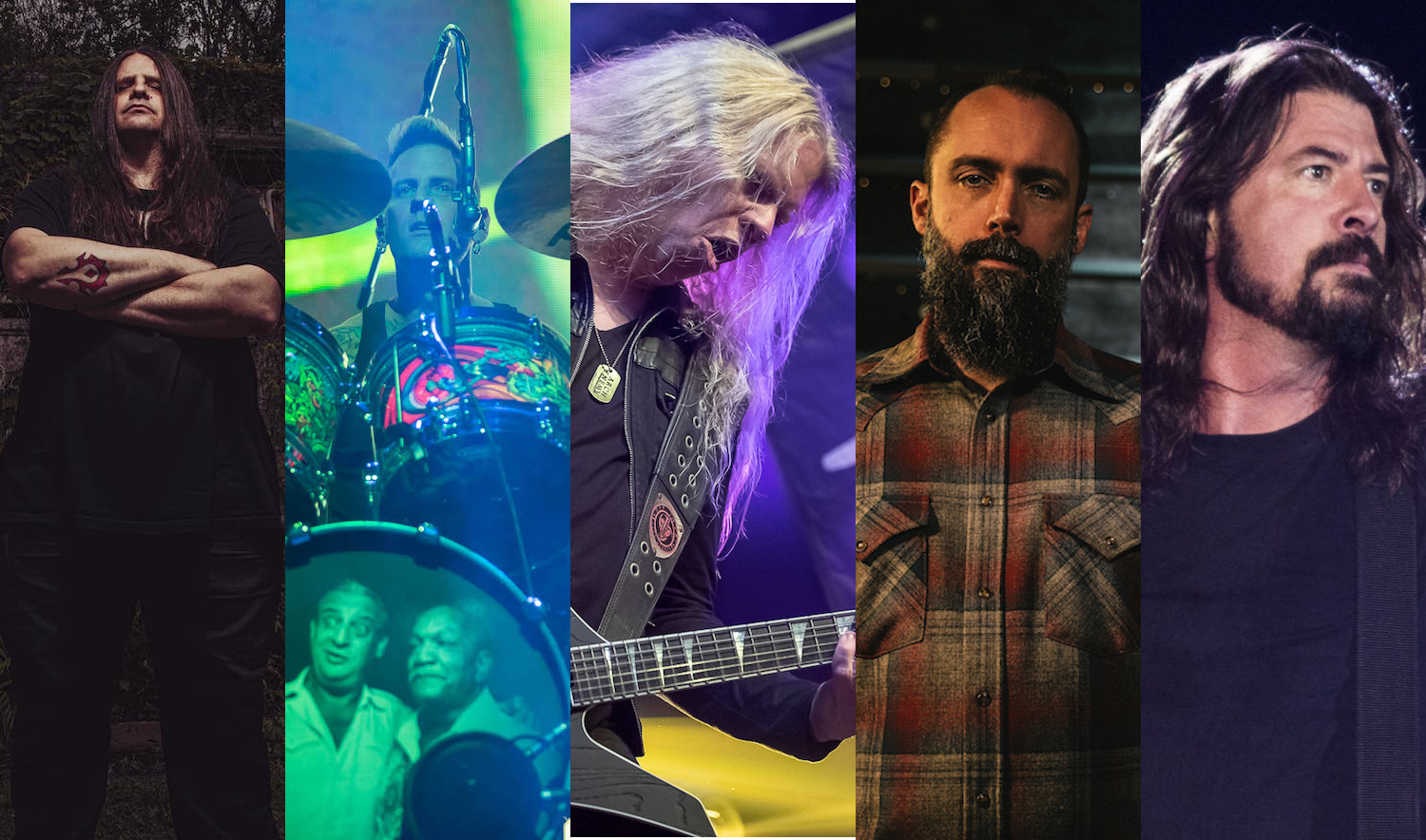 Not every band is destined (or meant to) have a massive, lengthy career. Sometimes they exist for a few years, put out some great music that we'll listen to for years to come, and then fade away. Sometimes they come back, sometimes they don't. Check out these 18 relatively short-lived projects, whose members all have other notable bands that occupy their time, but still put out records that are still worth spinning today. Enjoy!

Arcadea is Mastodon drummer Brann Dailor, Zruda guitarist Core Atoms, and guitarist Raheem Amlani. Arcadea released their self-titled album in 2017 and, as of 2020 right before everything went to hell, was promising new music.

Fleshwrought is vocalist Jonny Davy (Job For A Cowboy, Serpent Of Gnosis) and multi-instrumentalist Navene Koperweis (Job For A Cowboy, Entheos). The band put out one record Dementia / Dyslexia in 2010 and, despite some teases and even announcing a bassist in 2014, never followed it up.

Legend Of The Seagullmen is drummer Danny Carey (Tool), guitarists Brent Hinds (Mastodon, Giraffe Tongue Orchestra) and Jimmy Hayward (director of Jonah Hex, etc.), bassist Pete Griffin (Zappa Plays Zappa, Dethklok), vocalist David Dreyer, and synth player Chris DiGiovanni. The band released their debut album in 2018, and as of 2021 unfortunately revealed that Hayward was battling cancer. So it's not clear what's happening in their camp right now (but we do wish Hayward the best).

Lesser Key is vocalist Gilden Tunador, guitarist Brett Fanger, bassist Paul d'Amour (Ministry, ex-Tool), and drummer Justin Hanson (ex-3Teeth). Lesser Key released their debut self-titled EP in 2014 and then fell silent for a while. All we know at the moment is that as of late 2021, Lesser Key was promising their debut full-length album to be out this year but no additional information has yet surfaced.

Murder Construct formed way back in the early 2000s, but only released an EP and an album between 2010 and 2012. The band's recording lineup was vocalist Travis Ryan (Cattle Decapitation), guitarist and vocalist Leon del Muerte (Impaled, ex-Exhumed, ex-Intronaut), guitarist Kevin Fetus (Watch Me Burn), bassist Caleb Schneider (Bad Acid Trip), and drummer Danny Walker (Phobia). Murder Construct released a remixed and remastered version of their only album Results in 2020, so that's a sign of life… right?

Necromancing The Stone is vocalist John Williams (ex-Brimstone Coven), guitarists James Malone (Arsis) and Justin Wood, bassist Bart Williams (ex-The Black Dahlia Murder), and drummer Jeramie Kling (The Absence, Inhuman Condition). The band released their gloriously heavy metal debut Jewel Of The Vile in 2016 and, aside from one post in 2021, has been dead quiet since 2018.

Storm Corrosion is the project featuring Opeth's Mikael Åkerfeldt and Porcupine Tree's Steven Wilson. It's been 10 years since their one and only album, and Wilson said earlier in 2021 that he likes to think there will be another one someday. And hey – we got a Porcupine Tree reunion, so maybe there could really be another Storm Corrosion record?

Serpentine Dominion is vocalist George "Corpsegrinder" Fisher (Cannibal Corpse, Corpsegrinder), guitarist and bassist Adam Dutkiewicz (Killswitch Engage, Times Of Grace), and drummer Shannon Lucas (Asphalt Graves, ex-All That Remains, ex-The Black Dahlia Murder). The project was talked about for years until it finally dropped its debut self-titled album in 2016. All we know is that Fisher would be down to do a second record eventually.

Them Crooked Vultures is drummer Dave Grohl (Foo Fighters), bassist John Paul Jones (Led Zeppelin), and guitarist and vocalist Josh Homme (Queens Of The Stone Age). The band released their first and only album Them Crooked Vultures in 2009 and, despite the occasional comment here and there about the band getting back together every year or so, it hasn't happened yet.

T.R.A.M. is Animals As Leaders guitarists Tosin Abasi and Javier Reyes, drummer Eric Moore (ex-Infectious Grooves, ex-Suicidal Tendencies), and multi-instrumentalist Adrián Terrazas-González (ex-The Mars Volta) handling woodwinds and brass. T.R.A.M. has one record named Lingua Franca out in 2012 and that was it. The band's Facebook page is hardly updated anymore outside occasionally talking about some Terrazas-González guest spots.

Witherscape is drummer and vocalist Dan Swanö (Nightingale, ex-Edge Of Sanity, ex-Bloodbath) and guitarist and bassist Ragnar Widerberg (Shadowquest, ex-Witchcraft). Witherscape released two albums and an EP between 2013 and 2016 and then fell silent. The last update from the band was a comment to a fan in 2021 asking about if there were plans for new music, to which Witherscape responded "apart from the first album being [reissued on] vinyl later in the year, not."