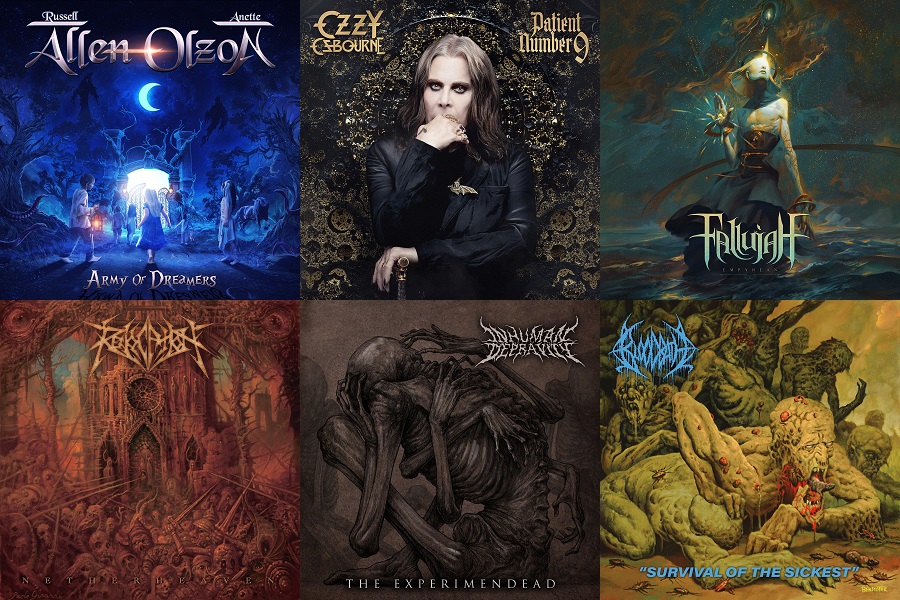 This week's new heavy metal releases include atmospheric proggsters, nasty death metal-ers, The Prince of Darkness, and more! Get 'em on vinyl and CD here, and as always – to the metals…

Russell Allen (Symphony X) and Anette Olzon (Ultima Grace, ex-Nightwish, etc) are back with their second collaborative album. Unsurprisingly, it's just as grand as the first. Their voices mesh really well together once more and this will surely get you feeling mighty. Get it here on CD.

Bloodbath – Survival Of The Sickest

If you're in the mood for old school style death metal, then of course Bloodbath got you covered. You've had "Zombie Inferno" for a bit now, but now you're getting ten more evil, nasty tracks. Also, you're getting some guest spots from Luc from Gorguts, Barney from Napalm Death, and Marc from Despair. J. has a full review here, and you can get it on vinyl here.

Slowing things down a bit now with the latest from Crippled Black Phoenix. This is over ninety minutes of atmospheric, experimental moodiness from these Brits. It's a long ride, but an enjoyable one. Get it here on vinyl and CD.

When this record was announced I was very surprised to see founders Scott and Andrew with an otherwise new lineup. This one has new vocalist Kyle Schaefer from Archaeologist who is easily the band's most dynamic vocalist they've ever had as well as bass noodling from the mighty Evan Brewer. There are also returning guests vocals Tori Letzler and Katie Thompson who were both on Dreamless and new spots from Chaney Crabb (Entheos) and guitarist David Wu (Riffshop/ex-Cyborg Octopus). This sounds like Fallujah, but with new things to say. Max's review is here, and you can get it on vinyl and CD here.

With a name like Inhuman Depravity, you know you're in for a sonic ass kicking. The band's first album in seven years serves one up nicely too. They're calling this "8 songs and 33 minutes of pure violence," and I cannot argue with them. They'll kick the shit out of me if I do. Hear the whole thing here as part of our Tech Death Tuesday column.

There's so much going on here. You're getting reunions with old collaborators (Zakk Wylde, Robert Trujillo, and Tony Iommi), some new collaborators (Jeff Beck, Mike McCready, and more), it's got Ozzy on harmonica for a song (at least?), and his strange sense of humor and darkness. Even without all the guest spots, it's a solid Ozzy record. Andrew Watt knows really how to get Ozzy to be Ozzy. Get it here on vinyl.

Parkway Drive have been one of the leading voices in metalcore for almost twenty years. That sound is still present here, but more than ever they are branching out into hard rock, straight ahead metal, and even nü metal. Little something for all eras of their fans here. Get it on vinyl and CD here.

Revocation had always been heavy, but they also took moments to be quirky and fun on previous albums. Fuck all that nonsense this time. This is easily their heaviest album yet. A guitar masterclass as always, but David seems real mad this time. Max has a full review here, and you can get it on vinyl here.

Concluding this really, really solid week with something really heavy. On their second full-length Warforged are blending heavy as hell breakdowns, blast beats, melodic technical guitar, and rapid tonal shifts. This record is an adventure, and one that you feel exhausted in the best way after.