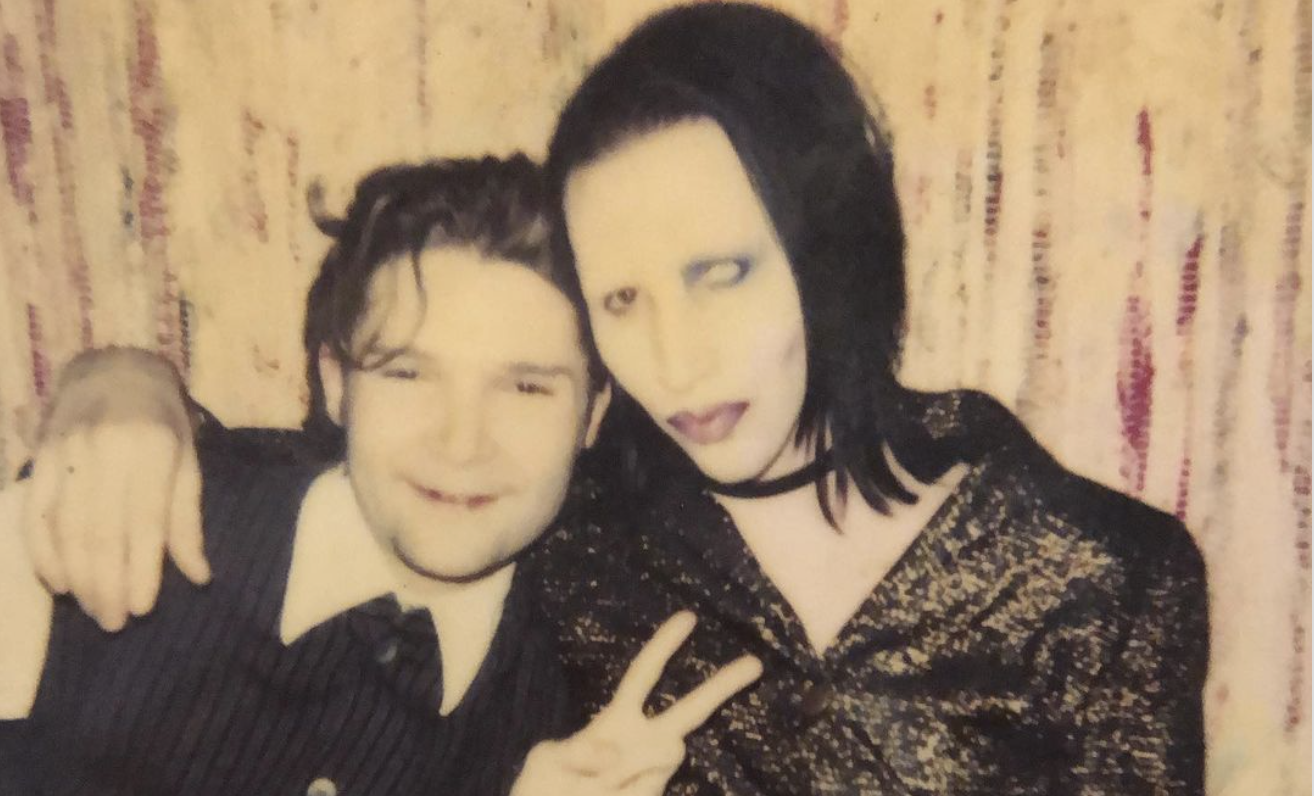 Corey Feldman, who rose to massive fame in the 80s with classic movies like The Lost Boys, The Goonies and Stand by Me is the latest person to come forward with accusations of abuse against shock rocker Marilyn Manson, accusing Manson of being obsessed with Feldman for over 20 years and emotional and mental abuse.

Feldman shared a photo of the two of them together and detailed what Feldman called was an obsession that Manson had with the 80s child star. Feldman accuses Manson of trying to get Feldman to break five years of sobriety to "snort cocaine with him."

Feldman also accuses Manson of emotional abuse. Feldman shared the above photo and said that was the night Manson said he got his entire style from watching Feldman's character Bobby Keller in the movie Dream A Little Dream. He says ever since that meeting Manson was obsessed with him. Here is Feldman's full statement:

“THE NIGHT @MARILYNMANSON TRIED 2 USE & ABUSE ME AS HIS PLAY TOY BY TRYING 2 MANIPULATE ME N2 BREAKING MY 5 YRS of SOBRIETY 2 SNORT COCAINE W HIM, WHILE GAS LIGHTING ME 4 HIS PRESS TOUR ON #MECHANICALANIMALS WAS WHERE THE DECADES LONG MENTAL & EMOTIONAL ABUSE BEGAN! LUCKILY I WAS NOT PHYSICALLY HARMED THAT NIGHT AS WE GOT OUT SAFELY, BUT THAT WAS JUST THE BEGINNING OF MY NIGHTMARE! #ISTANDWITHEVAN & ANY & ALL SURVIVORS OF HIS DEMENTED ABUSE!

Manson has been obsessed w me 4 over 2 decades! Dont #BELIEVE me? Just LOOK @ THE PUBLISHED FACTS! He 1st wrote several passages about me in his book #LONGROADOUTOFHELL as we had met a few months prior 2 that @ a Premier 4 #HOWARDSTERNSPRIVATEPARTS IN NY where the #GROOMING process began. He grabbed my face in front of the crowd and kissed me w his Black Lip Stick that I couldn’t rub off all night. He proceeded 2 gush over me telling me what a ‘Huge fan’ of mine he was. He then introduced me 2 his BFF #BILLYCORGAN All of this is documented in his book! He brags about it as if I was a special needs person he was making fun of. However this encounter is not only talked about in his book but is also discussed in @jennacantlose [Jenna Jameson] Autobiography. She NOTES HIS OBSESSION WITH ME there. But several months passed b4 he released the book making me aware of his 2 sided nature. B4 the book came out Manson heavily pursued a friendship w me. Telling me I was his idol. Telling me he actually got his whole style by watching my film #DREAMALITTLEDREAM & my character #BOBBYKELLER was the inspiration 4 his entire look. Idk if that was #TRUTH but he used it as a way 2 manipulate me.

Months later he called me on Xmas morning, 2 wish me a ‘merry Christmas’ & invite 2 a dinner party around the release of his book, @ the fancy Indian Hollywood hang Dar Macrabe where customers sit around on pillows as in traditional Indian style. When I walked in the rm it was quite clear that I was the ‘guest of honor’ as the whole room stopped 2 take pictures of the moment as he hugged me, then grabbed my hand, & led me 2 the table by his side. THE PIC IS FROM THAT MOMENT! We later went back 2 his home where the nightmare began. He has messed w my life ever since.”

The accusations began earlier this week when actress Evan Rachel Wood publicly named Manson as her abuser earlier this week, after previously detailing being mentally and physically tortured by an older man when she was 18-years-old. You can see the details of her accusations here. On Monday, she wrote that Manson "started grooming me when I was a teenager and horrifically abused me for years," adding "I was brainwashed and manipulated into submission." Yesterday, Wood released a second statement accusing Manson and his current wife of trying to blackmail her into silence.

Manson's previous wife, Dita Von Teese responded to concern from fans by addressing the situation, saying she was never abused by Manson. Sharon Osbourne also spoke positively of her relationship with Manson but said she did not keep tabs on his personal life.