10 Vegan/Vegetarian Metal Bands That Skip The Turkey on Thanksgiving 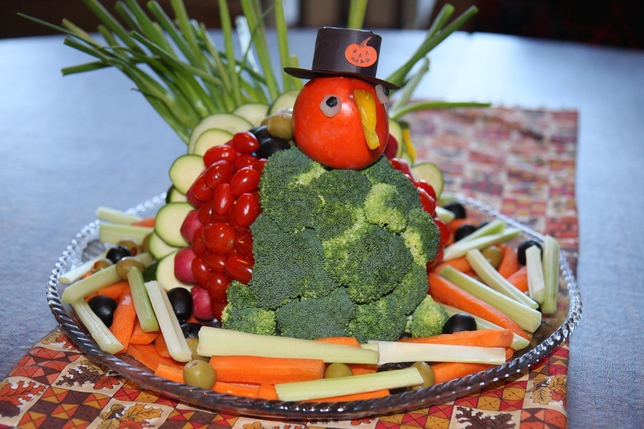 I’ve been a vegetarian and animal rights supporter for many years. So I’m always thrilled to hear about fellow headbangers who share my two biggest passions. Naturally, this subject becomes more apparent around the holidays, when 88% of Americans devour a few million pounds of meat. While vegetarian diets might be the minority, we’re in pretty good company. Here are a few animal loving musicians who will be celebrating Thanksgiving a little differently:

Travis Ryan and Josh Elmore are some of the nicest folk I know in death-grind, but their brutal angst filled music is almost entirely based on their vegetarian lifestyle. Ranging from songs about human slaughterhouses and cannibals, to animals flipping the table and treating humans like food, they are easily one of my favorite bands with a message.

It might seem weird for Metallica to have a proud hunter and vegetarian in the same band, but Kirk Hammett claims his vegetarianism is strictly for health. In an interview with KNAC.com, he explained: "I am a vegetarian but not because I love animals. I am one because I think eating animals is not good for your health. James [Hetfield’s] hunting doesn't affect me at all, as I have a lot of taxidermy in my house."

These are some of the most health conscious dudes I know, and it’s usually no surprise to learn they adopted a new good habit. Liam Wilson has been an advocate for yoga, meditation and veganism for many years and continues to expand on this today. Ben Weinman also became vegetarian in 2010, and even his dogs adopted a vegetarian diet along the way.

Paul Waggoner and Dan Briggs have both been outspoken in press about their vegan lifestyle from the start, and continue to spread the support today. I had the pleasure to grab lunch with Dan one day where he discussed how and why he became vegan. As PETA supporters you could also find several interviews with the band discussing their attachment.

It’s always great when a whole band takes a stand for something out of the ordinary, and such is the case with Converge. While Kurt Ballou is the only vegan of the group, the others remain vegetarian.

The ultimate proof that veg-life can be metal is found in Geezer Butler – heavy metal co-founder, bassist, Black Sabbath lyricist, and full on vegan animal rights activist Geezer Fucking Butler! He’s a regularly celebrated musician on the PETA website and you can find more information about his life long decision here.

You may notice the topic comes up quite a bit in their lyrics, but that’s because Carcass main men Bill Steer and Jeff Walker are proud vegetarians. Bill spent many years vegan, and has gone on record to talk about his support for animal rights.

Despite his gore filled slasher films and horror centric lyrics, Rob Zombie has been an animal rights supporter since 1982 when he saw slaughterhouse footage in high school. He started as a vegetarian and has since become vegan. Zombie recently appeared as a judge on the TV show Top Chef where he instructed the contestants to “Make vegan taste good”.

Lamb of God drummer Chris Adler, as well as bassist John Campbell are vegetarian. In a recent interview Adler told Peta2 that he stopped eating all red meat after learning the facts behind factory farming. He goes on to explain how he stopped eating meat completely: “We were on tour and saw a chicken truck go by with these chickens that were just bleeding-it was just disgusting. And that was it. I haven’t had a piece of it since.”

He's not as outspoken as other metal artists on the subject, but Canadian producer, musician, song writer, and cat-lover Devin Townsend is indeed a committed vegetarian. In an interview with the radio show Heavy Metal Food, Devin discussed why he doesn't talk about it as much: "People say, 'Well, why don't you talk about being vegetarian?' And I'm like, 'People will find out.' The people who are interested in what I do and why I do it, being a vegetarian is a big part of that…"

Please note this post is meant to be informative only. I believe dietary choices are a personal matter, and not something to project on others. If you’d like more information on vegetarian or vegan diets, you can go here.

This article was originally published in 2014.