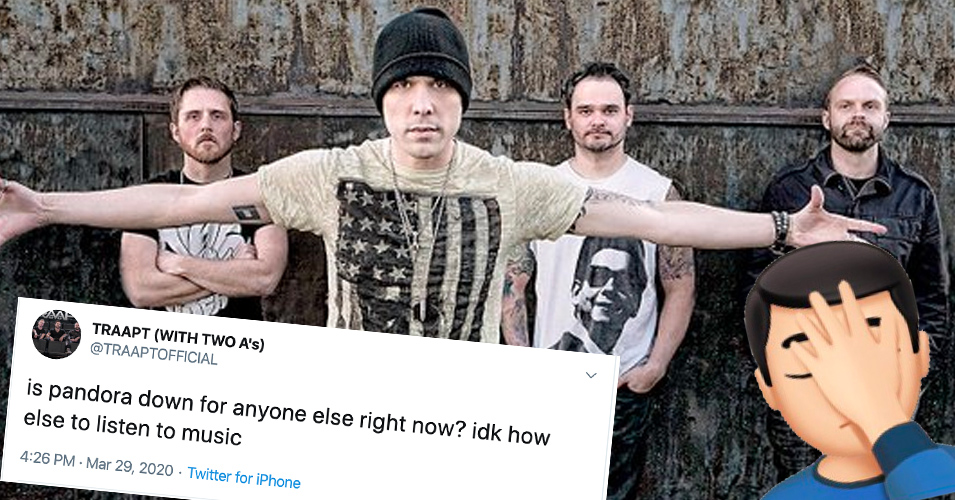 As much as we try to move past this Trapt story, they are making it hard to look away. Last week, what started as a meltdown on Twitter about Trump's response to the coronavirus outbreak in the US let to Power Trip challenging them, and then the entire metalcore scene busting jokes on them. We thought it was over, but I guess some folks on social media where trying to have a little fun poking at the band, but the Constitutionalists in Trapt were not having it.

Loudwire reports a parody account arose in the last 24 hours with the Twitter handle @TRAPTOFFIClAL, and as you can see the joke is it's all caps and the "i" in "official" is actually a lowercase "L." The band shot off their first tweet and a new parody account was born:

there's no way any of you fucking posers could learn headstrong on guitar. we can't even play it. i haven't played a real guitar onstage since george w Bush was preaident

Trapt frontman Chris Taylor Brown did not find this amusing and immediately threatened to sue, but the parody account was not swayed. The account temporarily changed its Twitter handle to "@TRAAPTOFFICIAL" before changing back and just indicating in their name that they were Trapt with two A's, resulting in less confusion.

It’s not going to be hard to find out who you are and sue you… You know that right? Screenshots of the whole thing. In order to violate our impersonation policy, the account must portray another entity in a misleading or deceptive manner. Many tweets u sent have done this. Bye

Whatever man. Already the tweets you’ve are setting you up for some costly damages. Do whatever you want, but this page will be down in a day and I’ll be suing you.

HEADSTROMG ILL TAKE YOU ON

Shortly after Loudwire published their story, Brown responded saying once they changed their name he was no longer interested in suing.

Yes and they quickly change the name they had by adding an A…. before it was the exact same as this account. Now we do not have a problem. #loudwire has become #liberalcucks #Trump2020 #maga

The parody account's bio was updated to read “hey thabjs for checking out our page:) we are the rock band traptofficLal (not to be confused with @traptofficial) that loves USA and kicking ass”. Good grief, another day of free publicity for Trapt. And really nothing says it better than this tweet:

parody account or not there is not a single thing i could have fabricated that would be funnier than this man singing "can't get far enough away from you" over and over as people file away from his terrible performance. he's literally doing the work for me.

The half dozen people still tweeting their hate at me for saying what I want on a platform I created are free to block this profile anytime they want. I have no issue with this. As 4 the rest of you! #Trump #maga #kag Oh and new Trapt album coming summer! In time for re-opening!