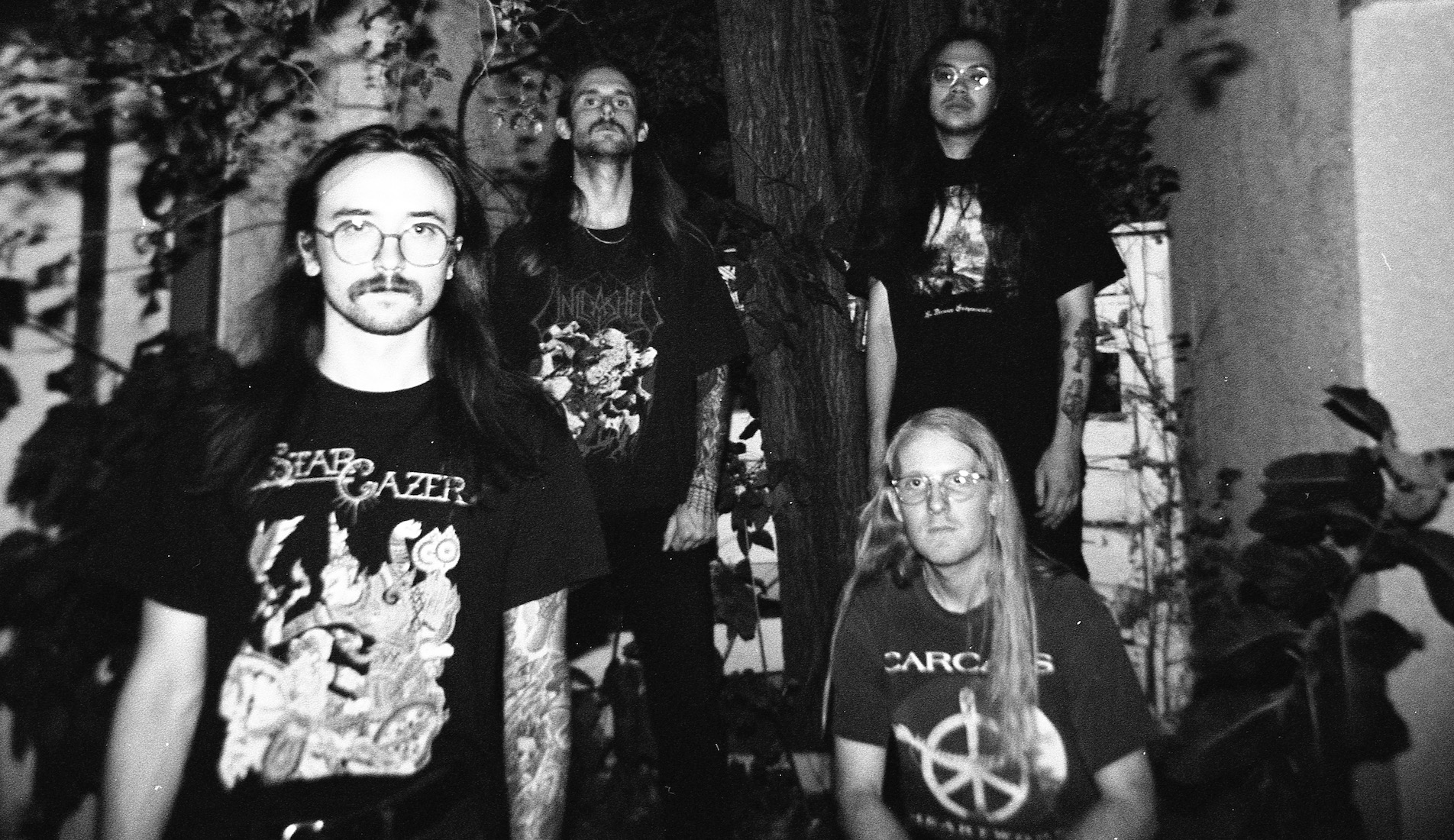 North Carolina's dark jangle riff-rockers ASG are back with a new EP and video for the EP's title track, "Pyramid Wheels." You can watch the video above, and you can also listen to the currently digital-only EP, Pyramid Wheels, here. It's not too often that we get new ASG material, though the spans of time between are made up for with killer quality!

Brutus has returned to us all with a new single called "Dust," which should remind you why we all need Brutus in our lives – it's a perfect mix of punk fury, massive atmospheres, and huge choruses for days. The single is from Brutus' upcoming new record, which as of right now has not yet been announced. The new record will be the band's first since their 2019 effort Nest.

You wanna hear some seriously filthy sludge? Because that's what Conan is bringing to the table today in all its dripping, disgusting glory. The band is now streaming "Levitation Hoax" alongside the announcement of their first new record in four years Evidence Of Immortality. Evidence Of Immortality features ex-Conan member Dave Perry on the track "Grief Sequence," and pre-orders are available here.

Crippled Black Phoenix has announced their new record Banefyre for September 9. The band is now streaming their new single "Blackout77," which tells the tale of the New York City blackout during the chaotic summer of 1977. The single comes alongside a music video directed by Guilherme Henriques. Banefyre is available for pre-order here.

Cyborg Octopus is back with their first new record in six years Between The Light And Air, and is now streaming the debut single "Seizure Of Character." It's a progressive metal crusher that's about "a traumatic brain injury that our saxophone player Patrick suffered while he was asleep, resulting in memory loss, personality changes, fear of sleep, and an existential crisis." Pre-order the album here.

Destrage simply has a way of making a load of weird components all work together as one dissonant, frantic Frankenstein's monster of a song and "Everything Sucks And I Think I Am A Big Part Of It" is no different. The song is a part of Destrage's new record SO MUCH. too much. due out on Periphery's 3DOT Recordings on September 16. SO MUCH. too much. is available for pre-order here.

Gaerea is back with a pummeling new single "Salve" and a new record Mirage due out September 23. The band is now streaming "Salve" alongside a music video directed by Guilherme Henriques, and I'm not really sure which is more terrifying. Feels like a solid 50/50 split on this one, right? Pre-orders for Mirage are available here.

Like King Crimson rising from the grave to jam with Matt Pike, Grave Bathers is here to sludge your day up real good. The band is now streaming their new single "Tarman Cometh" off their debut record Rock 'N' Roll Fetish due out August 5. Rock 'N' Roll Fetish was recorded live-to-tape at the analog-centric Memphis Magnetic by Davis M. Shubs and Drew Robinson. Pre-orders are available here and here on Bandcamp.

Greenwitch straddles the line between hardcore and death metal, offering all the moshy bits of both in one crushing EP. Greenwitch is the latest from the rising Maggot Stomp label, so I'm sure you'll start to see their name as support on bills for brutal show traversing North America soon enough. Grab Grid Walker here on Bandcamp.

Imperial Triumphant is now streaming their new single "Merkurius Gilded" featuring composer Max Gorelick and jazz legend Kenny G. Unfortunately the Steve Blanco-directed music video doesn't feature an actual appearance from Kenny G himself, but still – the jazzy shred is present and it's fantastic. Imperial Triumphant's new record Spirit of Ecstasy is due out July 22 and is available for pre-order at their website.

Kallias is now streaming their progressive-as-hell new single "The Dark Machine." The single covers a ton of ground from Opeth-related weirdness to Meshuggah-esque rhythms, and then of course plenty of Jeff Loomis-style shred. So y'know, everything you'd want from a progressive metal song. Keep up with Kallias here.

KEN Mode has announced their first new record in four years Null alongside an experimental, noisy new single "A Love Letter." The record is also KEN Mode's first with longtime collaborator Kathryn Kerr as a full-time member, contributing everything from saxophone and synthesizer to backing vocals and percussion. Null is available for pre-order here.

Locrian – "The Glare Is Everywhere And Nowhere Our Shadow"

Locrian is back for the first time in seven years with a new single "The Glare Is Everywhere And Nowhere Our Shadow." If you're looking to be immersed in a wash of noise and hellish visuals with absolutely no reprieve whatsoever, then go ahead and hit play on the visualizer below. New Catastrophism is out August 12, as well as a new EP titled Ghost Frontiers, with pre-orders for both being available here.

Mantar is now streaming their new single "Odysseus," whose sound is much darker than its bright and flowery music video. The video was directed by Dennis Dirksen and the song itself is sludgy as all hell. Mantar will release their Metal Blade debut Pain Is Forever And This Is The End on July 15. Pre-orders are available here.

Nebula is now streaming their cosmic, sunbaked new single "The Four Horseman." In true Nebula fashion, the song is equal parts a trip through the desert and a rocket ride through the cosmos. In other words, it's exactly what you'd want from the band. "The Four Horseman" is off Nebula's forthcoming new album Transmission From Mothership Earth, due out July 22. Pre-orders are available here.

Phobophilic – "Those Which Stare Back"

Phobophilic is gearing up to release their debut album Enveloping Absurdity via Prosthetic Records on September 16, and you need to hear the first single "Those Which Stare Back." Equal parts churning death metal and warping Death-like melodies, Phobophilic should easily catch the ear of any and all death metal fans. Pre-orders for Enveloping Absurdity are available here.

Sigh is back and they're as beautifully weird as they've ever been, thanks to their progressive new single "Mayonaka No Kaii." Sigh will release their new record Shiki on August 26 featuring bassist Frédéric Leclercq of Kreator and drummer Mike Heller of Fear Factory, along with an appearance by longtime member Satoshi Fujinami on bass. Pre-orders are available here.

Shadow Academy – "The Other Side"

Shadow Academy is the new duo of Emmy Award-winning record producer and songwriter Jim Roach and Dan Avidan, co-host of Game Grumps and frontman of Ninja Sex Party. The band is now streaming their beautiful new single "The Other Side" featuring an animated music video by collaborator Simon Macko. Get lost in the Floyd-esque spaciness and stream their debut album here.

Talas was originally active from the mid-1970s to 1985, meaning their retro sound is anything but a modern throwback. Featuring incredible bassist Billy Sheehan alongside drummer Mark Miller, vocalist Phil Naro, guitarist Kire Najdovski, Talas is here to bring the impressive-as-hell rock. Talas will release their new album 1985 on September 23. Pre-orders are available here.

Outta nowhere earlier in June, Terminal Nation and Kruelty dropped their The Ruination Of Imperialism split on 20 Buck Spin and it just tore everyone's heads clean off. Both sides of this split run the gambit of mosh-inducing speed to neck-breaking sludge, and without even a second of reprieve throughout its entirety. This split might've dropped as a surprise, but the surprise hasn't worn off. Get it here.

Vented – "Requiem For Myself"

Vented is an international supergroup featuring Sean Zatorsky (Sinsaenum, Chimaira), Austin D’Amond (DevilDriver, Bleed The Sky), Gergo Hajer (Omega Diatribe), and Simon C. Bondar (Sexual Education, White Tiger). The band is now streaming their new single "Requiem For Myself," which will kick your ass clean into next week. Vented will release their new record Cruelty And Corruption later this year.

Their name is Vulture, their logo looks like it would cut you if you touched it, and the song is called "High Speed Metal" written in all caps and italics. You already know what this is going to sound like, and you're right – it should be played on a boombox while you're wearing a headband and Aviators. "High Speed Metal" is a standalone single available here.

A.A. Williams is now streaming her new single "Evaporate" off her upcoming record As The Moon Rests due out October 7. The single feels like the perfect type of album to come out at the start of fall – spacious, a little doomy, and just enough downtrodden to welcome in the colder weather. As The Moon Rests is available for pre-order here.