Tech-Death Tuesday: ACANTHOSIS Preach From The <em>Scriptures Of The Accursed</em>
Progressive death metal trio Dischordia are on the cusp of releasing a new full-length entitled Thanatopsis. And we've got a full early stream of it to show you.

Ready to make your Monday way more enjoyable? Oklahoma City-based progressive death metal trio Dischordia certainly are, and to accomplish that goal we've got a fully early stream of their killer new record called Thanatopsis to show you. If you didn't know the poem with which the album title is from, the record ties into the famous poem called Thanatopsis by William Cullen Bryant written back in the early 1800's. Although a definitive date of completion can't be pinned down even by the author himself. Proving that almost all things fade with time, save for that which is truly memorable and noteworthy. Given the source materials lofty discourse on life and the inevitable acceptance of our own passing, it's quite the apropos subject for a death metal record. And Dischordia supplies the perfect soundtrack to accompany such a set of ideas throughout the journey that is Thanatopsis.

Records like Thanatopsis are a rare treat for me, as this gem doesn't fall neatly into any metal genre, instead, it's an explorative and inventive journey that never fails to impress me. And it's all the better for that. Overall Thanatopsis does fall into the sphere of progressive death metal, but it's frequently supplemented by a mix of  technical death metal, maddening dissonance, and rounded out by massive earth shaking groove elements. Given that, Thanatopsis exists somewhere between a variety of different sounds. In the process, breathing new life into progressive death metal as an experimental and eclectic affair that moves through a litany of different sounds and varied song structures as the record unfolds.

So check out the full early stream of Thanatopsis below. If you enjoy it, you can pre-order the record through the Dischordia Bandcamp page here. Thanatopsis will officially drop this Friday, November 25th through Rogue Records America. I've said it before in regards to other releases, and I'll say it again, don't be a fuck up, make sure to check this one out. Be sure to follow Dischordia over on their Facebook page as well.

In this article: Dischordia 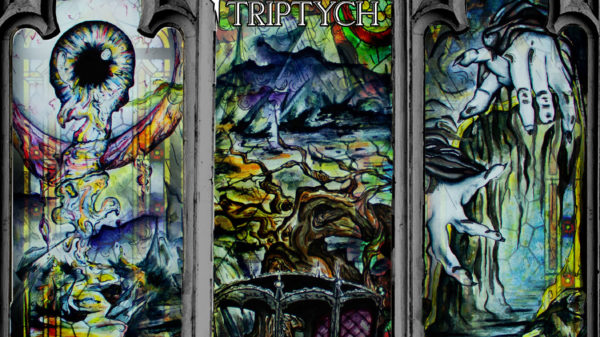