THE WEEKLY INJECTION: New Releases From SOLSTAFIR, ALESTORM, and More Out Today - 5/26

This week features new albums released in various formats like compact disc, streaming, vinyl, and more! To the metals…

Alestorm – No Grave But The Sea

Yo ho! Yar! Pirate stuff. This is the band's fifth album of pirate themed folk metal. I'm impressed that they've kept the gimmick up this long. I can't even keep up talking about the gimmick that long. Don't get me wrong, the album is a solid and fucking fun folk metal album still. So much metal is brooding and serious and bands like Alestorm keep me smiling.

I've appreciated the evolution of this band. They started off as a lurching doom band and have expanded their sound more and more with each album. Hurricanes and Halos is easily their most energetic release so far. The band have successfully evolved without alienated, and remained true without stagnating.

Here we have an instrumental concept album about a guy that is abducted by aliens and taken to a planet called Obsidion, On this planet music is spacey, epic, and kind of all over the place in a great way. This isn't an instrumental album that needs wanky nonsense as the song writing is solid enough to carry the record. Cool album.

Glenn's latest record is an interesting listen. It's the first time that I've really enjoyed a new Danzig track in a long, long time (see: "Last Ride"), but the album is mostly on par with his previous release of original material, Red Deth Sabaoth. That record, for me anyway, ranged from rough to "that was ok, I guess." This one seems a bit better actually, but the production sounds bad and that's killing it for me. Danzig fans, is this a good record? I don't even know.

On their first album in seven years (even though it should have been six to further play up the sixth album thing), Dream Evil are returning just as epic and silly as ever. Fans may be excited to know that Six features the return of guitarist Mark Black, the chap that replaced Gus G back in the day. The band has even joined the band's-with-songs-named-after-themselves club (as did Alestorm, actually), so I believe they are legally metal royalty at this point.

On their follow-up to the game-changing Otta, Solstafir are continuing their trek through post-metal atmospheres while keeping one foot (maybe one toe) in their grim roots. Parts of this sound like if Danzig (old, good Danzig) teamed up with Agalloch or someone similar. This is probably my fave for the week. Plus, look at the little deer on the cover. What's he up to?

You were always on his mind. 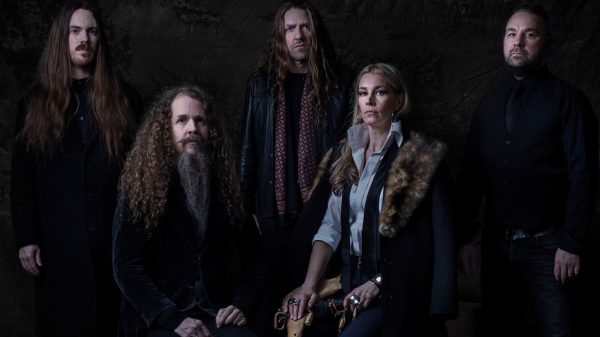 Jennie-Ann Smith has an incredible voice.