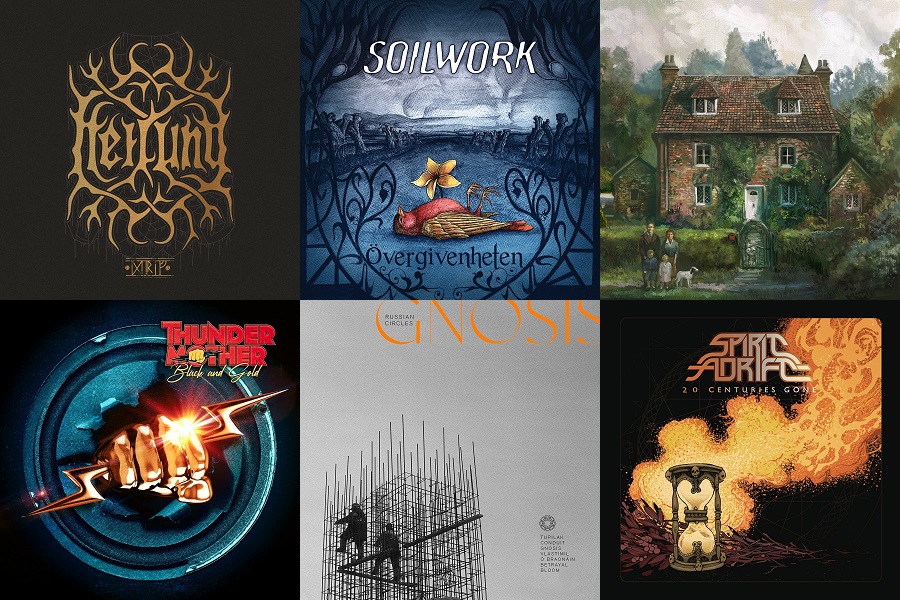 This week's new heavy metal releases include lots of headbanging, sonic exercises in tension release, that band that "no one likes" yet remains incredibly successful (so what is the truth?), and more! Get 'em here on vinyl at Gimme Metal, and now to the metals…

Starting this week off in a wild way. This release shows the outfit in darker territory than before as they lean into a more grim sound. The post-metal/rock tradition of an engulfing wall out sound is still there as they hit you with waves of heaviness and a four-vocal attack. Also, you're still getting lots of violin and piano. Jordan has a review here.

This is the ninth record by the band and they inexplicably didn't continue naming their records with nods to the Fast and Furious movies. F9, would have been perfectly acceptable. I sort of expected more twang on the heels of their tour announcement with some country acts, but instead it's the usual mix of grooves and melody. Get it here on vinyl at Gimme Metal.

Those looking for some ambient, haunting folk music should hop on Drif. It's not heavy, but it is dense and oddly unsettling. This is a great headphones in a dark room album. Jeff seems to kinda enjoy the album here. Get it here on vinyl at Gimme Metal.

The Mountain Goats – Bleed Out

Honorary metal guy John Darnielle and his fellow Mountain Goats are back with a record of tracks inspired by 60's-80's action films. Said inspiration is probably why a lot of the tracks are higher energy than you'd expect from the band. A fun one from the band that usually hits so hard lyrically. Get it here on vinyl at Gimme Metal.

Speaking of hitting hard, here's the latest from instrumental heavyweights Russian Circles. This is a record centered around building suspense and tension. When the tension breaks, heads will bang. Max has a full review here. Get it here on vinyl at Gimme Metal.

Spirit Adrift are sorta due for a new full-length, but to tide folks over here is an eight-track EP (which you might as well call an album, but whatever). This consists of two new songs, which are both rad, and an eclectic selection of covers. They take on Pantera, Type O Negative, Metallica, Thin Lizzy, ZZ Top, and Lynyrd Skynyrd and probably not the songs you'd expect by any of them. Get it here on vinyl at Gimme Metal.

The last decade has been the underrated golden age of Soilwork and Övergivenheten is yet another win for the band. Guitars are shredding, vocals are epic, and the songs are grand. Chad's full review can be found here. Get it here on vinyl at Gimme Metal.

Pairing nicely with Spirit Adrift is the latest from Thundermother. This front to back classic riffs and stellar vocals. Fans of AC/DC should get on this. Get it here on vinyl at Gimme Metal.