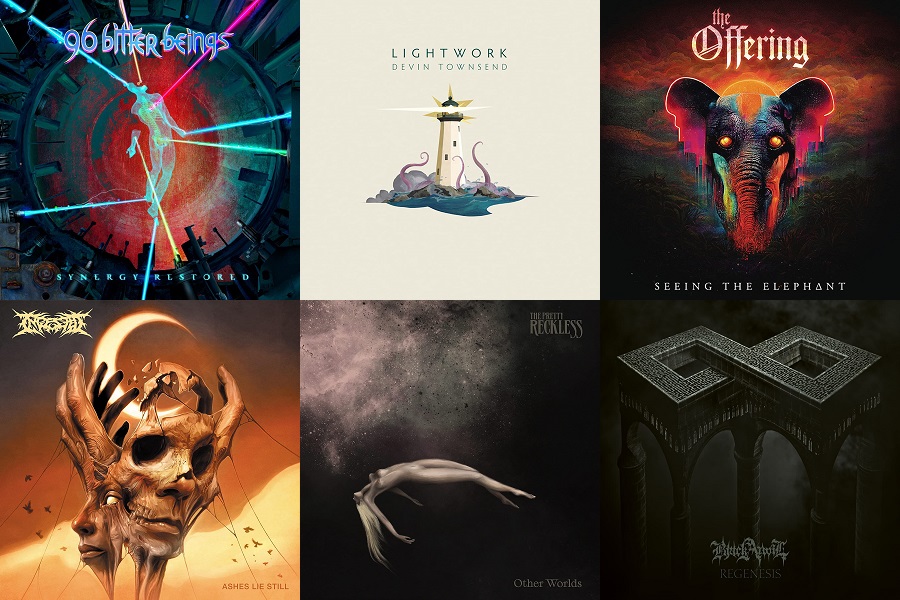 ALSO! Today, Bandcamp is doing one of their days of giving 100% of what you pay directly to the labels and artists as Covid-19 Pandemic relief. So if you can get stuff from Bandcamp, please do. Or get some stuff over via Gimme Metal.

Four years ago Deron Miller kicked off 96 Bitter Beings with a crowdfunding campaign which brought us the record Camp Pain. While hyping that record there were talks of a second album, and this is that album. If you dug the first record, or classic CKY, you'll dig this. It has all the catchy-ass riffage that you'd expect from Miller. Get it here via Gimme Metal.

Now how about some darkness? Black Anvil are pigeon-holed as a band that keeps things full-speed all the time. This time they're playing with tempos and moods for their most dynamic record yet while still retaining the evil aura. Jeff has a full review here. Get it here via Gimme Metal.

If you're in the mood for some glitchy, driving industrial then Contracult have you covered this week. The New Torment vacillates between oddly catchy hard rock and absolute digital mayhem. Their Bandcamp bio simply reads "KEEP. GOTH. HARD." and I'd say they do a pretty good job of that.

Ingested have been really busy lately. Their third album in as many years brings lots of heaviness. They're also bringing the guests with spots from Sven de Caluwé (Aborted), Matt Heafy (Trivium), Julia Frau, and bass by Dom Grimard (The Last Felony). Get it here via Gimme Metal.

The Offering – Seeing The Elephant

Long-time readers know that I appreciate a band that's hard to nail down in a few sentences – despite it being all I do. The Offering are one of those bands. They have metalcore foundation, but stray from this band quit often. They're sort of like a groove-oriented Destrage. Get it here via Gimme Metal.

The Pretty Reckless – Other Worlds

Other Worlds sort of feels like a filler of a record, but filler fans will likely appreciate. This includes acoustic versions of some PR songs, a remix, and some covers of Bowie, Soundgarden, and Elvis Costello. This really serves as another showcase of the undeniable power of Taylor Momsen's rock voice. Get it here via Gimme Metal.

The every morphing Devin Townsend has transformed once again. Dev is pushing introspection and melody to the forefront this time. Songs rarely hit hard musically, but this feels like a record that can help some folks out. If you enjoyed Snuggles or the more chill songs on Transcendence/Sky Blue, then you'll enjoy this. Those looking for Hevy Devy will want to explore the b-side companion album Nightwork. Jordan's review is here. Get it here via Gimme Metal.

Wrapping this week with a rather weird one. Voivod are usually pretty strange, but this EP is even odd for them. It's a trio of themes from the classic Japanese show Ultraman, then a couple live Voivod tracks recorded in 2018. If you get the physical product you get the Ultraman songs performed in multiple languages and instrumentally. Get it here via Gimme Metal.