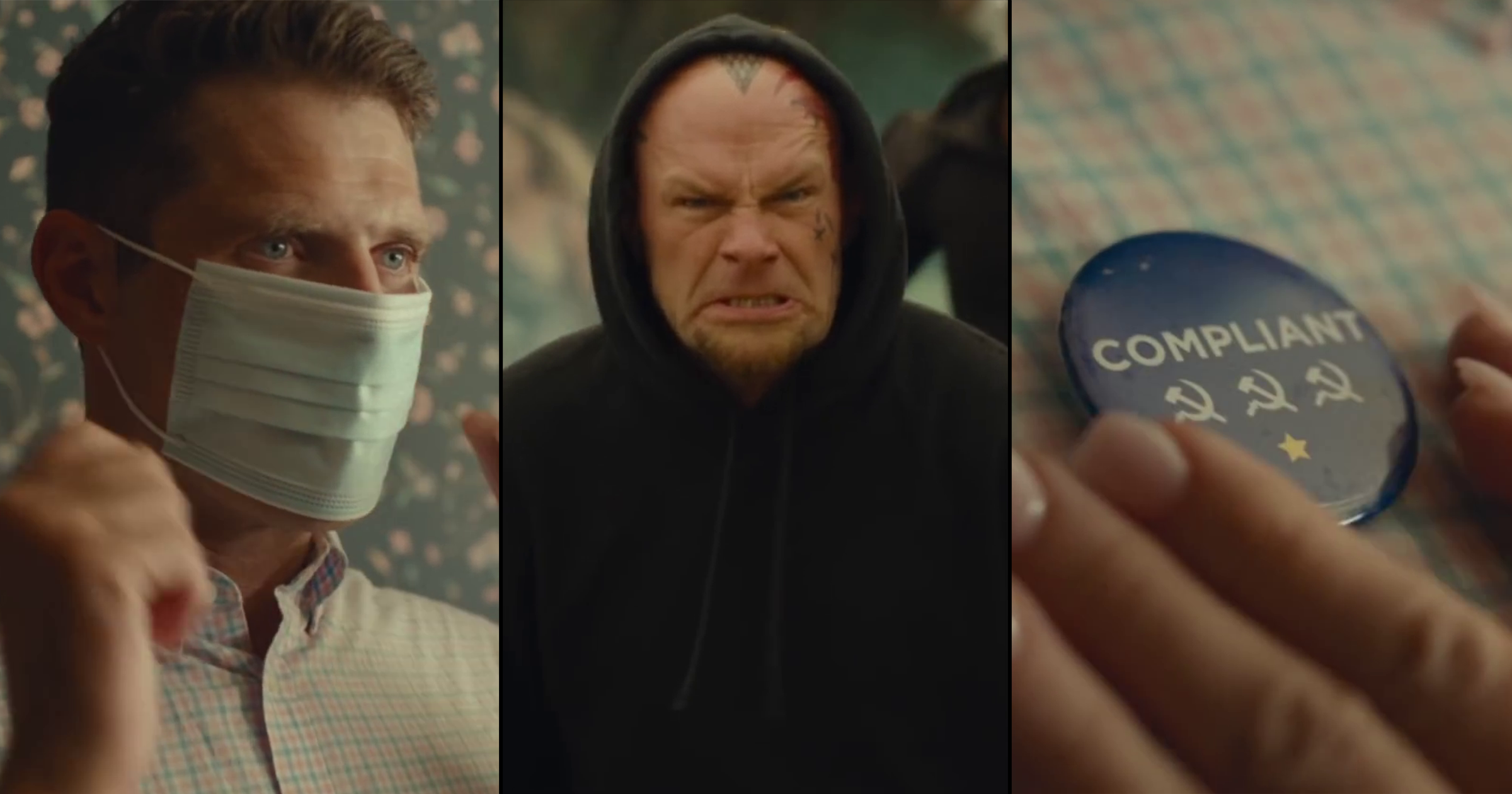 Five Finger Death Punch had a busy week. They confirmed that guitarist Jason Hook is out, announced their new guitarist, and they just released a new video for "Living the Dream." The video is causing a bit of controversy for all of its, let's call it, subtle imagery. Because some of these deep metaphors might be lost on folks, we thought we would go through it shot by shot to help explain what's going on.

There is so much to take in here. The video begins with an artistic shot of palm trees and the following text appears "Fiction reveals truth that reality obscures – Ralph Waldo Emerson." We're in for a deep video, folks.

Immediately, we see zombies pushing carts of toilet paper. Then, there are some lyrics asking Captain America if he's off to fight the bad guys, while a fat guy in a Captain America costume scarfs down hot dogs in a bar. Eventually, he and a guy in a Superman costume get into a fight and get kicked out, while an Iron Man costume wearing fella, is passed out in the corner from…eating Tide Pods?

Now, we have a line of Americans standing in line waiting to be judged but a woman, being portrayed as an elitist with an "exempt" pin. She is seen giving a man the nod of approval to put on a mask, and then places a "Compliant" button on him, with some sickels and hammers on it for good measure – I guess the implication is following CDC regulation to wear a mask is communism?

You then see, what I assume is, prison labor, wearing "The People's Republic of America" jumpsuits, with sickel and hammer symbols REPLACING THE STARS IN THE AMERICAN FLAG – WHAT IS GOING ON?!?

We see the "exempt" elitist walking down the street holding leashes, but don't first see what she's walking with. Everybody on the street is wearing masks but her (she's exempt!). Two civilians try to buy ice cream with masks on, and are confused as to how to eat it.

It's then revealed that the Elitist actually has HUMAN BEINGS on a leash, with dark outfits and skull masks. One could easily assume these are meant to symbolize Antifa. Suddenly, the elitist noticed the ice cream vendor HAS A TRADITIONAL AMERICAN FLAG ON HIS CART!!!! She unleashes the CANCEL CULTURE!!! and they take down this guy's cart for having an outdated American flag design (As somebody that has dealt with publicists demanding old band promo photos be removed, I can relate to being annoyed with this sentiment for updated graphics).

SUDDENLY THERE IS AN AWAKENING!!! Five Finger Death Punch, waving Old Glory, is seen running towards the elitist and the zombies with toilet paper and the Elitist. We see drunk Captain America, the ice cream man, and other human extras reappear from previous scenes in the video. Some of them get shot, drop the American flags – but no, others pick it up and keep running forward, and all of the sudden–

All of the sudden, we are in colonial times. IT'S ALL JUST A DREAM! The Constitution is being signed to make sure this doesn't happen.

Oh thank God, Five Finger Death Punch saved us! Guitarist Zoltan Bathory was credited in the press release as coming up with the concept for the music video. He offered this quote:

"America is a beautiful idea that draws immigrants like myself from all over the world to the promised land of equality, life, liberty, and the pursuit of happiness. This idea is now under siege and certain events are starting to remind me of the things many of us came here to escape… It’s not a “left against right” problem but an evolutionary problem. The growing pains of a civilization that without the necessary spiritual enlightenment, arrived a bit early to a level of technology where everyone is connected. The good news is that now everyone has a voice. The bad news is that now everyone has a voice.

So we are living in the manipulators’ paradise, where liars and hypocrites run unscathed, the news are just opinions, politics are a blood sport, and facts are determined by consensus instead of the truth. We as artists, however, have a unique opportunity to portray and ridicule the absurd to prevent it from becoming reality."

Update: Bathory has released a new statement since the video caused controvery, saying that it is not anti-mask. Although, his statement is making us ask a few questions. Read his words and ours here.

Watch the video below.