We all had a good laugh about how nobody showed up to see Trapt play live at the not-at-all-socially-distanced Strugis rally this weekend, but turns out those pictures didn't quite tell the full story. While the first photos that surfaced online looked like a handful of people arrived, Trapt themselves shared a photo from the stage that seem to rebutt the idea that it was only a handful. Still, the photo from the stage was a skewered perspective. How many people actually saw them?

Well, now more photos and videos have surfaced, and we have a clearer picture of what's happening. But what's pretty amazing is Trapt can't keep tabs on their own bullshit, so they're easily caught cropping photos to give the appearance that there were more people than there were.

For example, a photo surfaced from far back from the stage that shows a few hundred people are in fact engaged in the show, and then there are a few hundred more kinda just standing around. Trapt themselves shared this photo, a repost from a fan:

Here’s a better view of right around the time we did “Come Together” with our brotha Anomaly. Great show brotha! We warmed em up good! Looking forward to the next one! @LegendaryEnergy #trapt #an0maly #sturgis #cometogether pic.twitter.com/r7WlIUF2oz

Some tweeters questioned how many people were actually there based on the angle. 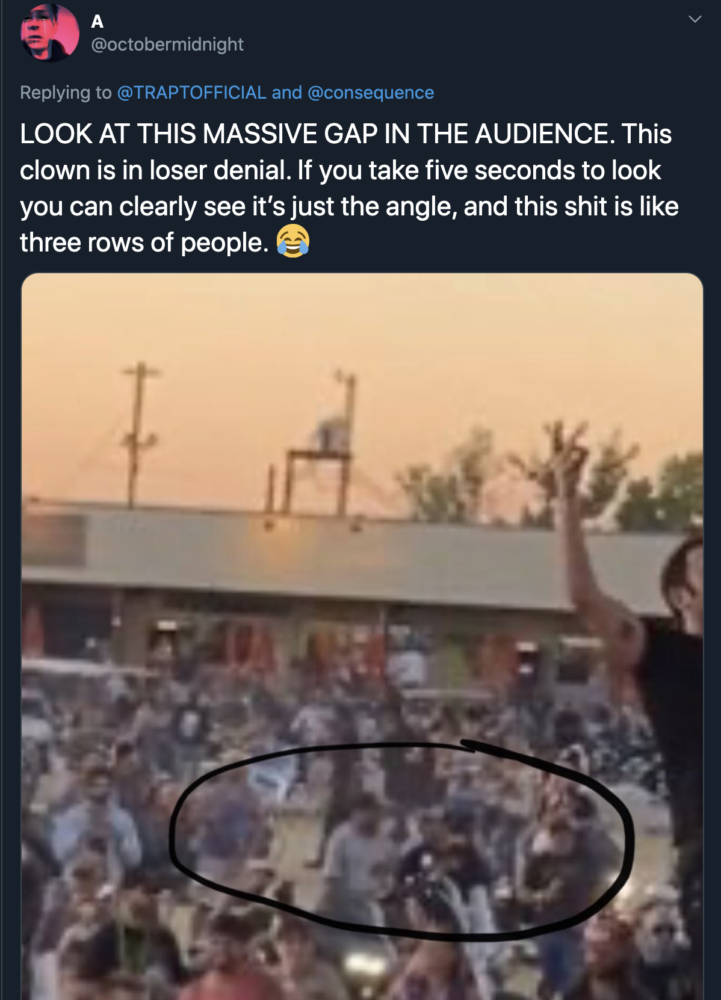 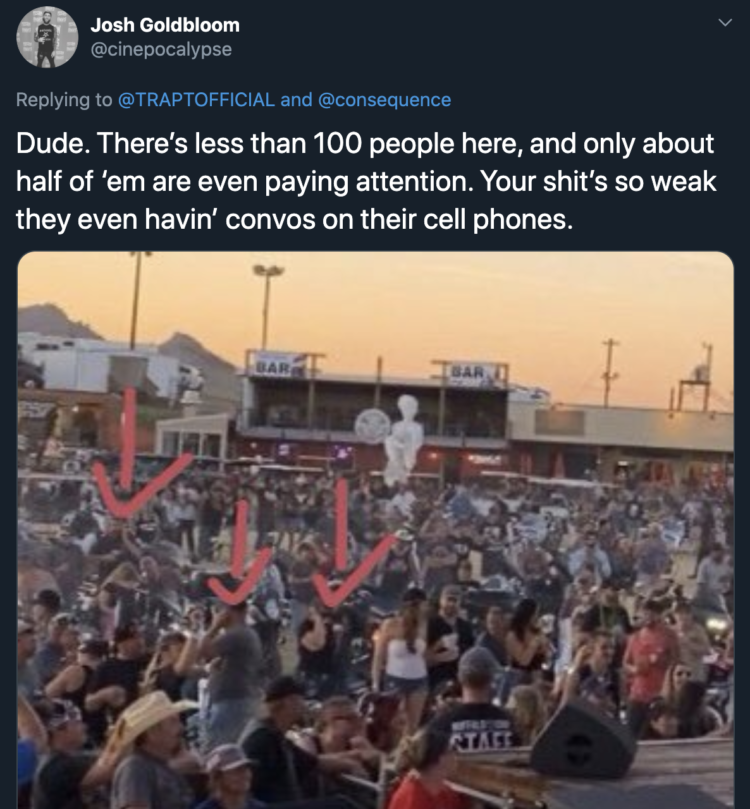 This appears to be a screenshot from a video, which shows the band playing their one and only hit, "Headstrong," with what looks like maybe five or six people in crowd rocking out. There is a high possibility that because this was the end of their set, the Sturgis bikers were gathering around to get ready for the next band scheduled, but we'll give the band the benefit of the doubt.

Now, you'll see band posted a more full photo of the crowd. But they couldn't even keep up with their own bullshit, because then in a response to a fan, Trapt shared the same photo, but clearly cropped and with filters added to give the appearance that it was more packed than it really was:

They cropped the photo that they themselves shared!

The band also released this video from the same perspective as the photo they posted earlier in the week, but it really doesn't do them any favors:

I see a lot of rock blogs trying to say @TRAPTOFFICIAL played in front of an empty audience. That’s not what it looked like from my view!

People got more lit for our song than the closing acts. But that’s another story! pic.twitter.com/TS8upwp9IK

As I was scanning Trapt's social media, I came across another lie that Trapt was caught in. You may recall (or probably not because who is wasting brain energy on this) that Trapt sold only 600 copies first week of their album, and the band claimed, with no proof, that it was actually 4,000 copies.

Just to make it clear. “Shadow Work” is around 4k albums sold/ over a million streams. We’re doing great after less than 2 weeks of album being out and with ZERO music industry help. In fact quite the opposite. No iTunes, Amazon, Google Play, etc even showing the album was out

Well, Trapt can't even keep their own lie going on Twitter. When a tweeted pointed out that Trapt only sold 13 copies of their album this week, Trapt responded saying that album sales "are approaching 4,000" – the same number Trapt said they sold first week.

What’s the URL? Either way we are approaching 4k albums sold, costs have been paid off and we’re nearing 2 million streams and adding 150k a week. We’re good, man. You need to accomplish just one thing before you talk about anyone else…

I love how after swearing up and down and ranting about having sold 4k albums the first week he's now trying to act like just now getting to 4k nearly a month after release is actually impressive. I suppose it is in some way, to local smalltime bands that play at bars and stuff.

You’re a total moron. The same idiot who says trump lied 16k times. Your side is going to get crushed in November. With the physical sales we didn’t get counted til 3rd week we would have been around 2500 sold 1st week, which is great for a band who is completely 100% independent

I was looking at a set of numbers wrong, so was off by 1000. We basically had FB only to promote our album and could only hit 10% of the people who have liked the page total. We are doing great considering. I just find it funny how anonymous cowards use twitter. Total losers ?