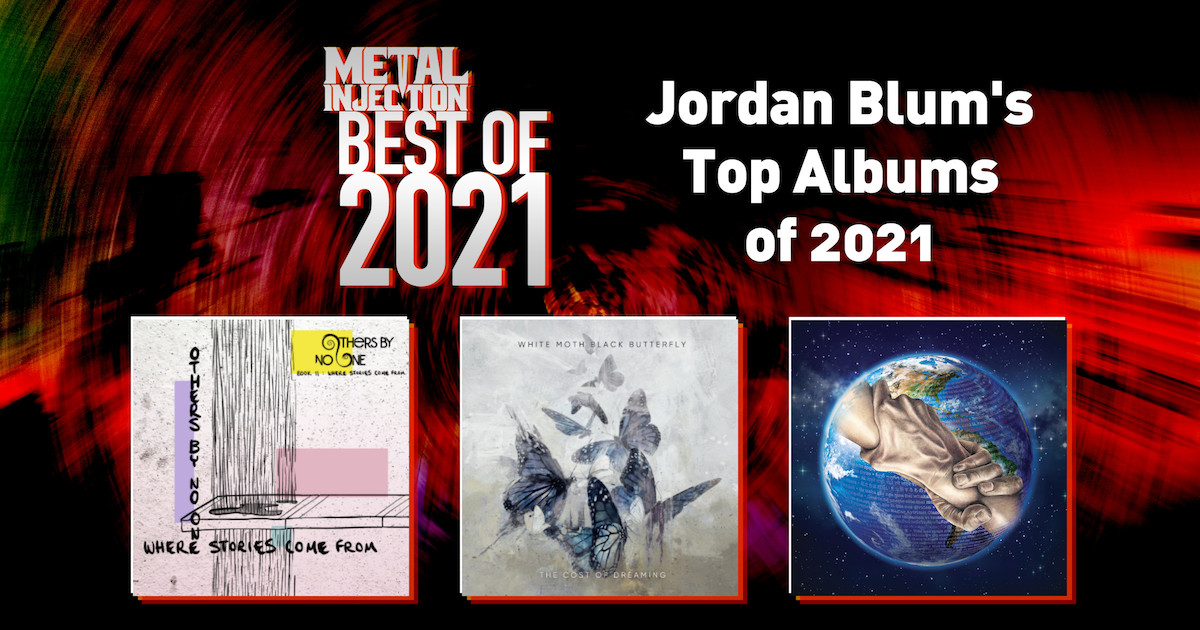 As with most years, my favorite albums of 2021 comprise metal and non-metal releases. Likewise, my picks in both cases are from household names and lesser-known artists who absolutely deserve more attention. You'll definitely notice some big records omitted from my list, such as ones from Dream Theater, Cynic, Gojira, Liquid Tension Experiment, The Neal Morse Band, Steve Hackett, Transatlantic, and Manchester Orchestra. While I did enjoy those albums to varying degrees, none stayed with me as much as the following ten LPs. It's really as simple as that, and I'd love to know how my choices compare to yours!

10. Others By No One – Book II: Where Stories Come From

It's a crime that Ohio's Others By No One aren't better known, as their formula—basically, an amalgamation of Mr. Bungle, Devin Townsend, Frank Zappa, The Dear Hunter, and Coheed & Cambria—is absolutely amazing. That's particularly true on this full-length conceptual follow-up to 2017's Book I: Dr. Breacher. It tells the story of "a reclusive writer" who's "being followed … by a mysterious stalker" and whose tales start coming to life. Be it the operatic post-hardcore/alternative rock touches of "Foxjune," the technical death metal theatricality of "Well-Read," or anything else here, Book II is a jaw-dropping experience.

It's not Leprous' top sequence, but that doesn't mean it's not excellent. On the contrary, Aphelion does a superb job of once again demonstrating how perfectly Einar Solberg's commandingly expressive voice pairs with the classical chaos of his bandmates. The daunting tenderness of "Running Low" is perhaps the greatest representation of this, but each piece lives up to that legacy. In particular, "All The Moments" is entirely empowered and heavenly, whereas "The Shadow Side" is sharper, quicker, and more distraught. Beyond that, the group's ability to interweave electronic elements within their bleakly symphonic foundation is arguably stronger than ever, too.

Hushed And Grim maintains the relatively somber tone of 2017's Cold Dark Place EP, so it's a markedly less colorful and playful ride than Mastodon's prior collections. That works in its favor, though, because its heightened focus and weight make it their best effort since 2009's Crack The Skye. Opener "Pain with an Anchor" is a clear highlight, serving up some bitingly intricate sludge instrumentation alongside some truly emotional verses. Later, "Pushing the Tides" offers tantalizing catchiness prior to the psychedelic comforts of "Eyes of Serpents." True, its almost ninety-minute duration can be overwhelming, but every inclusion earns its place.

Despite a reduction in members—and a slightly more accessible approach—Common Ground sees the group flawlessly dishing out more classically luscious prog rock flourishes, historical storytelling, and present-day flair. The title track is as regally uplifting as anything else they've done, just as "Atlantic Cable" exploits into their characteristic brilliance at crafting spellbinding multipart journeys. Plus, "All the Love We Can Give" includes an irresistible bridge from drummer/backing vocalist Nick D'Virgilio. It's a stunning work that's made even more meaningful due to the unbelievably untimely passing of frontman David Longdon. Rest in peace, sir, and thank you so much.

This third LP—their first since 2008's Board Up the House—climbed up my list as soon as I heard it a few months ago. It marks the introduction of vocalist Tony Wolski, as well as the first time they've ever used a real drummer (Nick Yacyshyn). Thus, it's their fullest merging of shoegaze, post-rock, and progressive metal so far. "Pyrocene" and "Ritual Circle" are what would happen if you mixed Kid A-era Radiohead with Animals As Leaders. Elsewhere, the title track is like fusing TesseracT, Mastodon, and the heavy end of Porcupine Tree. Don't let it pass you by.

Sweden's Diablo Swing Orchestra are experts at melding experimental metal with swing revival and other madcap flourishes. Unsurprisingly, their fifth record is one of their best outings yet, outshining its immediate predecessor (2017's Pacifisticuffs) by recalling 2012's more fun and vibrant Pandora's Piñata. Hell, "War Painted Valentine" is likely the most hectically zany yet intellectual song you'll hear all year, while "The Sound of an Unconditional Surrender" is beautifully brooding before "Saluting the Reckoning" presents an aridly vintage and playful rocker. There's almost nothing better than a band who has so much fun being so damn talented and unique, right?

My feelings on it have only grown stronger since I named it one of my favorite LPs of the year back in July. Basically, it sees vocalist Daniel Tompkins doubling down on the most serenely atmospheric and digital aspects of TesseracT. Of course, the rest of the band— Skyharbor guitarist Keshav Dhar, singer/lyricist Jordan Bethany, keyboardist/orchestrator Randy Slaugh (Devin Townsend, Periphery, Architects), and drummer Mac Christensen—help ensure that White Moth Black Butterfly's third outing is as moving and majestic as possible. On gems such as "Prayer for Rain," "The Dreamer," "Darker Days," and "Under the Stars," they certainly do.

It’d been almost forty years since the famed/TV film composer—and former Oingo Boingo mastermind—released 1984’s So-Lo. Given that immense break, as well as his wide-ranging history, admirers were unsure of how Big Mess would work within his overarching catalog. Fortunately, it fits in quite well, channeling many of his past distinctions while remaining quite fresh. There’s the macabrely cinematic and catchy “Happy” and “Sorry,” plus the symphonically graceful “We Belong” and the tongue-in-cheek social satire “Kick Me.” Along the way, Elfman stays idiosyncratic despite evoking titans like King Crimson, David Bowie, and Sleepytime Gorilla Museum. It’s utterly brilliant.

I'm as big a fan of progressive pop as I am rock and metal, and Spellling's third studio album checked off all the boxes for me. In fact, it's my biggest musical discovery of the year. Why? Because its gorgeously baroque arrangements and enticing vocals instantly channeled some of my favorite stylistic artists—Kate Bush, Sufjan Stevens, Joanna Newsom—while also showcasing a very characteristic persona. Every track offers a special blend of childlike wonder and ingenious complexity, yet "Boys at School" easily ranks as not only its greatest selection but also my pick for the best song of 2021.

1. Between The Buried And Me – Colors II

As I wrote in my review, Colors II was perhaps the most anticipated progressive metal album of 2021. After all, its 2007 predecessor was Between The Buried And Me's breakthrough, so it had a lot to live up to as both a sequel to that opus and a follow-up to 2018's Automata duology. Luckily, it did all of that and then some. With plenty of callbacks to Colors strewn throughout its hooky hyperactive wackiness ("Fix the Error," "The Future is Behind Us") and gentle bypasses ("Sfumato," "Stare into the Abyss"), Colors II is everything fans of the North Carolina prog/avant-garde quintet could hope for.