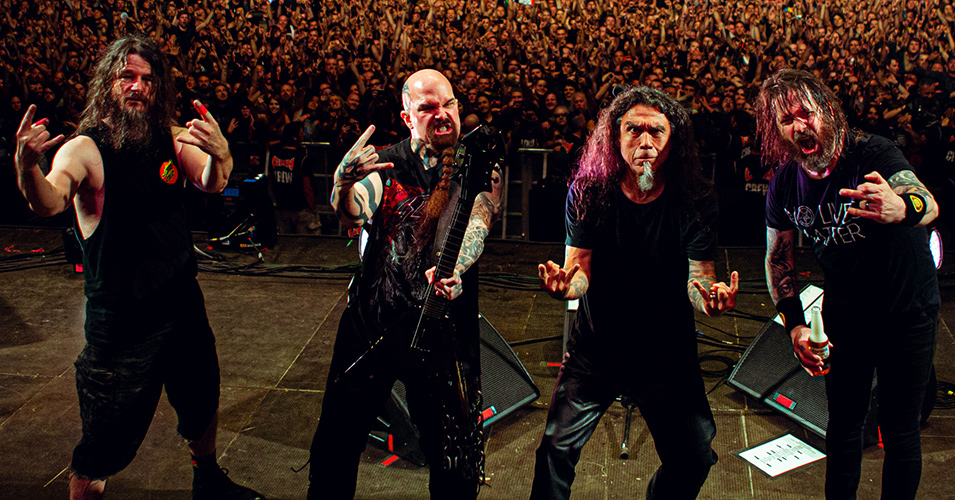 Slayer started their farewell tour in May 2018 and have clearly been doing just fine for themselves. According to the band's management in an interview with Pollstar, Slayer has made over $10 million in merchandise sales on the farewell tour alone. That's not even ticket prices – just what you're buying at the merch booth.

Ernie Gonzalez of Slayer's management team Rick Sales Entertainment Group said in the interview that people like the Kardashians wearing Slayer merchandise has ultimately helped sales big time. Guitarist Gary Holt might hate 'em, and some of you might get really mad about celebrities wearing metal shirts, but Slayer is making bank off it all.

“You’re not supposed to see Slayer shirts on Kardashians, or basketball players rocking Slayer T-shirts as they walk into the arena on TV. That wasn’t supposed to happen,” Ernie Gonzalez says. “If you said that 30 years ago, nobody could have fathomed that. The awesome thing is they never had to sacrifice any artistic integrity, never tried to tone themselves down to conform or meet the standards of what the music business feels is the best path to success.”

Kristen Mulderig of Rick Sales Entertainment Group also adds that the onslaught of Slayer merchandise is far from over, and adds that there might even be a Slayer event in the future.

“We’re in legacy mode,” Mulderig says, “which is a lot to do, even though they won’t be making records or on the road. They still have their endorsers, there’s still merch and branding to do – sync licenses and who knows? Maybe coming up with some sort of event that is Slayer-based. This is all stuff we’re thinking about and talking about. Slayer lives on, absolutely.”

Slayer will release a live album and movie based on previous music videos titled The Repentless Killogy on November 8. Slayer's final run of tour dates kicks off on November 9th with Primus, Ministry and Phil Anselmo performing Pantera covers. Here is the routing and ticket links:

We're giving away a pair of tickets to each stop of the tour. Enter to win below:

Oops! We could not locate your form.