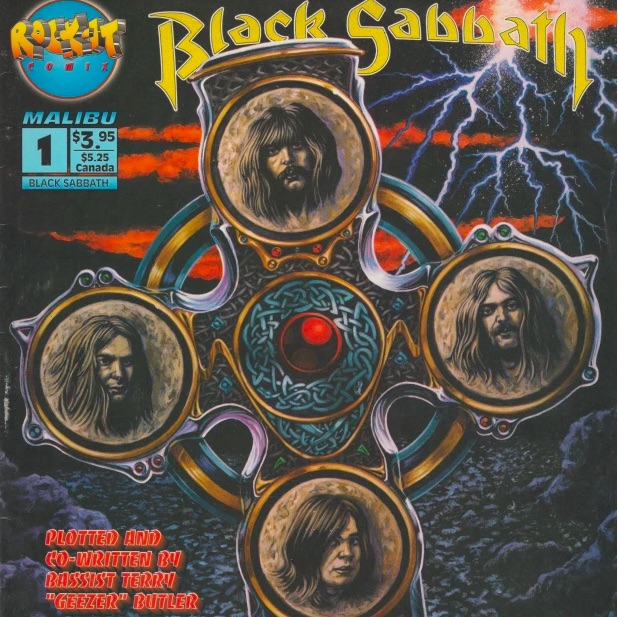 Black Sabbath bassist Geezer Butler's lifetime exploits run the gamut, with plenty of tales to be told. Before joining Black Sabbath, he spent a couple of years as a hippie hanging out at various "flower-power" type events in England. He loves cats and animals in general and has been a vegetarian (at first due to his family being too poor to purchase meat), and vegan for the vast majority of his life. He has also publicly advocated for a ban on Foie Gras–a luxury snack derived from a duck, which is cultivated in a barbarically cruel manner. As to not leave you with a bad taste in your mouth, another very cool thing on Butler's heavy metal CV is his comic book based on Black Sabbath which he "plotted and co-wrote" with David J. Rubin and Robby "Rock" Conte. Geezer also gives credit to Tony Iommi for his assistance with the comic's "plotting."

Published in 1994 by Malibu/Rock-It Comix, Geezer (using his birth name of Terence in the comic) tells the origin story of Black Sabbath, accompanied by illustrations from the talented Tom Kyffin. Though it's been called a mix of fantasy and reality, Geezer maintained the comic (at the time) "is the most accurate portrayal of Black Sabbath to date, noting it did contain "poetic license." Knowing that, let's take a look at some of the revelations from Butler's comic book tale of Black Sabbath.

As a child, Geezer saw a UFO enter his bedroom

Let's start this with a strange nugget you may have heard Butler speak of before: the night a glowing orb entered his bedroom window. The comic panels show the golden orb entering the young Geezer's bedroom, then exiting the same way Santa does, up through the family's fireplace. Butler said that during the incident (which happened on more than one occasion) he began to see visions of his future self. He also noted it was the first time he experienced a "supernatural event." In the comic, this occurred during the 1950s when UFO sightings and reports were happening on the regular. In fact, in 1952, the Prime Minister of the UK, Winston Churchill sent this very X-Files-sounding message to the Secretary of the Air, The Right Honorable William Sidney:

"What does all stuff about flying saucers amount to? What can it mean? What is the truth? Let me have a report at your convenience."

In 1953 The British Air Ministry created the "UFO Desk" in an effort to catalog numerous UFO sightings by military personnel. So there's that to consider as well as Butler's use of "poetic license." Me? I want to believe.

Butler was once visited by a terrifying vision of an evil spirit with a cat's head, convincing him he was going insane

In 1968 during Black Sabbath's early days as Earth, Geezer had a terrifying vision of a devil-like figure with a feline head. The vision/dream scared Butler so much he thought he was going insane. And no, according to Butler, drugs were not involved. After heading home after practice with the band, Butler had a vivid dream of a man with a cat's head appearing at the end of his bed. When he showed up for practice the next day late, the other members of Sabbath were quick to blame his lateness on a girl. But when he appeared, he sure looked like he was tripping balls on something other than sex. Here's Butler on the incident, which quickly curtailed his interest in the occult:

"I wasn't on anything last night. But I did see something that looked like a man, who looked like a cat, only he didn't talk or purr. He just stared at me, so deep I felt his eyes in my gut. I think I've gone too far in my occult dabbling. Something tells me I need to stop now before it's too late."

While Satan might seem scary to some (much like a creepy figure of a man with a cat head), Butler has maintained he was more fearful of Catholic priests than Satan. "Me too, Geezer!" said everybody.

When "the King of the Witches" of the UK told Black Sabbath to start wearing one of the bands' signatures looks: crosses to protect them from Satanists

After his initiation into Wicca in the UK in the early 1960s, occultist Alex Sanders created his own variety of Wicca known as Alexandrian Wicca. He would then be elected as the "King of the Alexandrian Witches." Witchcraft was all the rage in the 60s and 70s in the UK and, according to Tony Iommi, he seems to recall Sanders showing up at one of Black Sabbath's early gigs. This wouldn't be too random, as Sanders and his then-wife collaborated with pioneering prog/occult band Black Widow to help the band tighten up the satanic-esque rituals they incorporated into their live shows. In Butler's comic, he notes that Sanders contacted Black Sabbath to let them know that a group of Satanists had put a "hex" on them because the band refused to play a gig for them. In order to protect themselves, Sanders recommended they all start wearing crosses. And this leads us to more of the legendary mythology that made Black Sabbath. Either on the advice on Sanders or out of their own fear for their safety from ill-tempered occultists, Ozzy's dear old Dad (who worked at a facility that manufactured car parts), hand-crafted crosses for each member of the band from metal scraps.

In the last few pages of the comic, Butler describes the bloody cross incident above. Tony Iommi has backed this story up, recalling it occurred at the band's show at the Hollywood Bowl on September 15th, 1972. This was also the same show where Tony was nearly attacked by a man armed with a large dagger. According to Tony, he was too preoccupied with being pissed off at his speaker's malfunctioning to realize the man was headed straight for him. The lunatic didn't make it far and was tackled by the bands' crew/security. As it turned out, the would-be assailant also had a large open wound on his hand, and had used his own blood to paint the red cross on Black Sabbath's dressing room door.

Though I'm not a huge fan of leaving the best for last, this is the most fantastic takeaway from Geezer's comic. When the band traveled to Clearwell Castle to record their 1973 record, Sabbath Bloody Sabbath, things got very, very weird. Butler, Iommi, Bill Ward, and Ozzy have all said they saw "ghosts" at Clearwell during their time there. Ward was so scared he allegedly slept with a knife in his bed. But perhaps the scariest thing that happened in Clearwell Castle was when Ozzy almost burned to a crisp after falling asleep in front of one of the castle's large fireplaces. Here is Butler's account (as told from the perspective of Tony Iommi who refers to Butler as "Terry"):

"First, Ozzy slept too close to the fireplace on our first night there and his covers caught on fire. Which for Ozzy would have been a tame way to go. If it was not for me (Iommi) and Geezer waking up and smelling smoke he (Ozzy) would have been a pile of ashes. The log seemed firmly secured in the fireplace and shouldn't have moved, but it did. Right, Terry?"

Forget the ghosts! Burning logs that can move so they can set people on fire would be enough for me to hightail it right out of there. Unsurprisingly, this isn't the first time a member of Black Sabbath caught on fire. In another moment of poor decision-making by the various members of Black Sabbath, during the recording sessions for the album Heaven and Hell (1980), Tony Iommi asked Bill Ward if he could set him "on fire." Once Bill was ready to get lit up in the worst way possible, Iommi doused him with two bottles of rubbing alcohol, thoroughly drenching his clothing. When he ignited Ward, the fire quickly blazed through his clothes to his skin and in Iommi's words, Bill went up like a "bomb." The incident fucked Ward up good, resulting in more than a few third-degree burns all over his body, especially his legs. Despite Iommi's prank gone seriously wrong, it seems there were no real hard feelings about almost being turned to dust as Ward stuck with Sabbath for their next album, Born Again (1983).

The rest of the comic is pretty neat as well. It includes interviews with the members of Black Sabbath and a fantastic layout of photographs featuring the various incarnations of Black Sabbath up until 1994. If this kind of ephemera is your thing, copies of the comic, depending on condition, can be had for around $20 bucks or so.