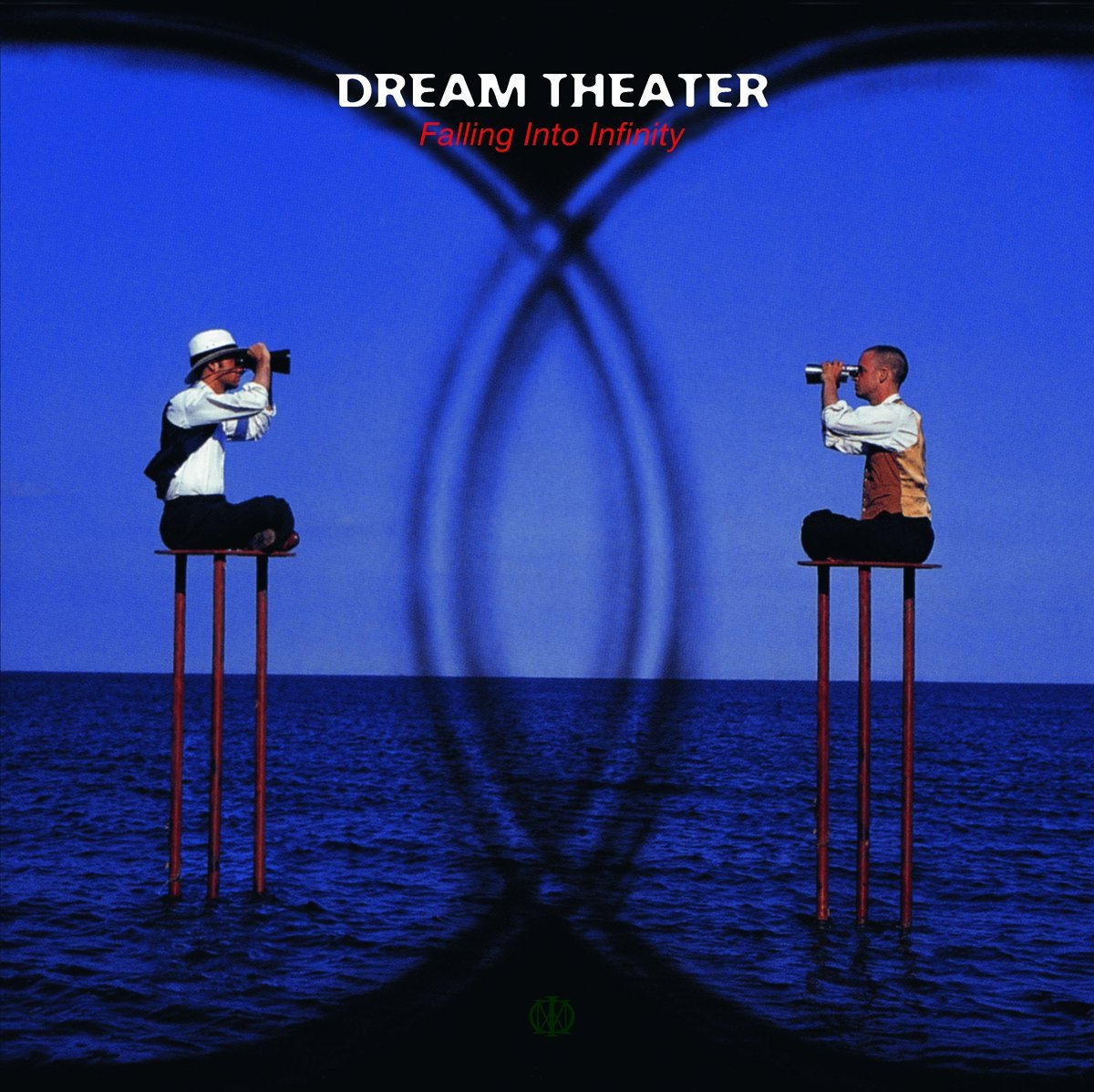 Welcome to Throwback Thursday! This is the place where we get to indulge in nostalgia and wax poetic about excellent metal of years past. Today's 87th TBT features the fourth studio album from the untouchable, unbelievable outlet that is Dream Theater.

According to Wikipedia, "The album's writing and pre-production phases were stressful periods for the band, as they were feeling constant pressure from the record label to deliver a more radio-friendly album." The album also features a new keyboardist, Derek Sherinian, in lieu of long-time member Kevin Moore. In this video, Derek Sherinian talks about his biggest contribution to Falling Into Infinity being his lead-in riff for "Lines in the Sand":

It's amazing to hear isolated pieces of a Dream Theater song. The artistry of Dream Theater is due, in part, to their ability to congeal many simpler pieces into a larger, impossible cacophony that somehow solidifies into a cohesive song.

In this clip from a "Making of Falling Into Infinity" doc, there's a quip from the band that states, "The most we can do as a group is to write the best we can, to put our best foot forward. This is for us our best work. It's like when you listen to music from around the world and you get a diversified bunch of guys together,  that's what makes Dream Theater. We're like a melting pot."

In this Finnish interview, the band talks about hitting number 5 on the Finnish charts with Falling Into Infinity saying, "I think it's a natural progression, we're getting older. Some of the songs are a little different than things we've done in the past. But there are other songs that are definitely Dream Theater, some progressive 12-minute songs, as always." Mike Portnoy goes on to say, "In the past, all the songs kind of sounds the same. In this album, every song sounds completely different. We took the time to record each one of them separately, with different recording techniques, different instruments. It adds dimension and personality." Portnoy also calls their first US single from the album, "Lines in the Sand", one of their best tracks:

And this is what Jordan has to say about Falling Into Infinity:

Indeed, even the band disagrees on whether or not the seemingly sell-out nature of Falling Into Infinity was a result of their own artistic desires or outside pressure from the label, managers, and the like. After all, “Pull Me Under” from 1992’s Images and Words—which many fans still consider their best, as well as their true debut since it’s the first with vocalist James LaBrie—was a HUGE hit, so there was always insistence for them to get another one. Obviously, they never did, which is why their only sanctioned retrospective collection is called Greatest Hit (…and 21 Other Pretty Cool Songs). Likewise, Falling into Infinity is sandwiched between 1995’s immensely ambitious A Change of Seasons EP and 1999’s Metropolis Pt. 2: Scenes from a Memory, which is undoubtedly one of the best progressive metal albums of all time. Thus, it makes sense that it’s still under-appreciated amid Dream Theater’s canon.

However, there is a lot to like about it. For one thing, it challenges the common notion that Dream Theater prioritizes tricky playing over quality songwriting (a viewpoint that, to be honest, seems more legitimate around the time of Systematic Chaos onward). Granted, “You Not Me” and “Burning My Soul” are a bit weak in that regard, but then you have “Peruvian Skies”and “Hollow Years,” two of the best songs guitarist John Petrucci ever wrote. There’s also the more instrumentally adventurous and challenging “New Millennium,” “Hell’s Kitchen,” and “Just Let Me Breathe” (the latter of which even recalls the two-note hook of “Wait for Sleep,” albeit unintentionally).

Of course, John Myung’s closing epic, “Trial of Tears,” is a great mixture of both songwriting and virtuosic playing. Rather than center on the forced movement of Native Americans during the mid-1800s, he once clarified, “It deals with ego and my perception of it, and understanding how it can cage you and really alter your perspective”. The central chorus—”It’s raining / On the streets of New York City”—is simple but instantly hypnotic and emotional; from there, the band cements their expertise at crafting vibrantly complex instrumental sections that effortlessly appeal. The sparse acoustic reflection near the end is lovely, too!

All in all, Falling into Infinity is by no means their best album, but it is a sufficiently individualized and special one.

What do you think of Falling Into Infinity? Is it too commercial for you? Sound off down below. If you want to check out Jordan's book about Dream Theater, you can do so here.