DAVE MUSTAINE Used To Sell Weed To Dino From FEAR FACTORY's Sister
Jesus says no to rock and roll (except he doesn't).

When I think Christian metal, two bands immediately pop into my head – Demon Hunter and Extol. They're not necessarily the most popular bands within that circle, I'm sure, but they're both well known names. Those bands have performed with acts such as Mastodon, Opeth, All Shall Perish, and In Flames, among others, throughout their careers. Not exactly un-Christian bands, but bands that touch on some fairly non-Christian topics.

So it's kind of strange that Megadeth's Dave Mustaine apparently wouldn't let King Diamond go on stage with Volbeat during the 2012 Gigantour routing. According to Mercyful Fate guitarist Hank Sherman in an interview with Vita In Musica (below), Mustaine wouldn't let Diamond go out on stage with Volbeat to perform Mercyful Fate's "Come To The Sabbath," because it was un-Christian.

Diamond wasn't having any of that shit.

"…apparently, Dave Mustaine didn’t want King to be onstage and do whatever Satanic lyrics, or whatever that was all about. So, King came to the concert and he was given the… he was told that, ‘Hey, King, you’re not allowed’ from Mustaine for some reason.

“Then we went onstage and when King was down among the spectators… We did the intro where [King Diamond] was singing the intro vocals. That was pretty funny…What that was all about, I really don’t have a clue. I don’t know if suddenly Mustaine had gotten into God, or, you know, for whatever reason. But that was pretty bizarre, you know, because back in the days, they were very good friends… Megadeth were touring with [King] Diamond back in the ’80s. So there’s [been] a lot of changes in [Megadeth]."

Alright, fine. Technically it's Mustaine's tour and I guess he can lay down whatever stipulations he wants to, but Volbeat's music deals pretty heavily with making deals with the Devil and all those classic "rock n' roll"-styled lyricisms. So drawing the line where he did just seems kind of silly.

Not to mention Mustaine professed his Christianity around 2007, yet has shared the stage with bands like Slayer and Warbringer (with songs such as "Demonic Ecstasy") since then. This isn't the first time Mustaine has pulled this, famously preventing Rotting Christ from playing a festival he was headlining. 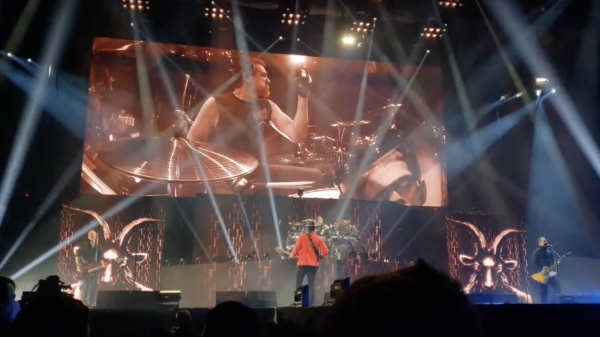