SCOTT IAN Doesn't Think ANTHRAX Would've Made It Without The Big Four Shows & <em>Worship Music</em>
Flynn also revealed Anselmo once told him that he “hated the n*gger era of Machine Head.”

UPDATE: Anselmo has since posted an apology video for his actions. Watch the video here.

Yesterday, footage surfaced where Pantera frontman Philip Anselmo controversially raised his arm in the Nazi salute, a sieg heil, and shouted "white power" into the audience at the very conclusion of the "Dimebash," a tribute to late guitarist "Dimebag" Darrell Abbott. Yesterday, Anselmo commented on the video saying he'd "fess up" to being drunk and saying it was an inside joke because he and a few people had white wine backstage.

Machine Head's Robb Flynn was also at the Dimebash this past weekend, and Flynn made some shocking revelations, namely there was no white wine at the 'bash:

I was there and I could tell you there wasn't a chardonnay or a pinot grigio in sight backstage. In fact, the only thing that you were drinking, Phil Anselmo, was Becks German beer. Maybe that's where the joke came from?

A photo has surfaced showing Anselmo drinking white wine that night, although that doesn't excuse his actions to us.

Flynn also revealed that earlier in the night, he spoke to Anselmo and within five minutes Anselmo told Flynn that he “hated the n*gger era of Machine Head,” and he hated the sound and the look. Flynn also mentioned that during "A New Level," he noticed Anselmo again do the sieg heil and mouth "white power." The gloves are off and this whole video is a much watch: 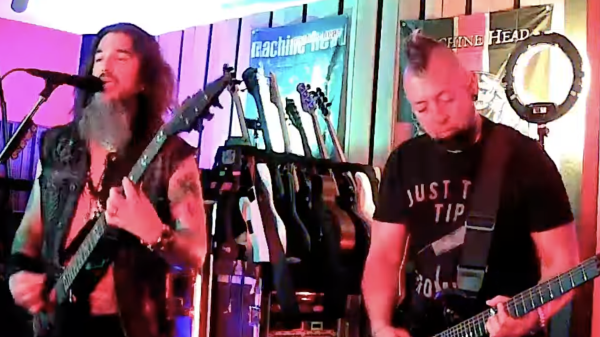