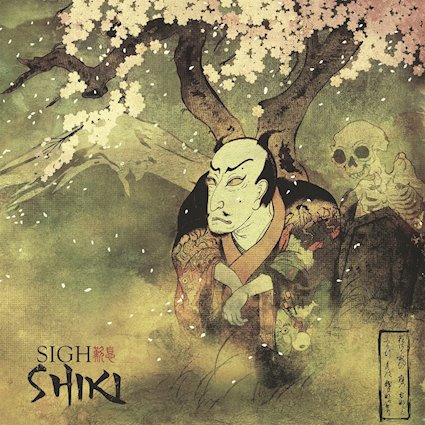 Let's talk parallels. And how it's not a stretch to imagine Sigh, laterally, as the avant-garde black metal parallel to Mr. Bungle and how they rejigged the boundaries of rock and metal. Outside of the band's respective genre baselines and musical directions, an even bigger difference between the two comes in the department of sonic enormity, or lack thereof. Where Mr. Bungle's layers of instrumentation, vocals, noises, samples, detritus and whatnot possessed immensity and fullness, Sigh's historical exploration of sound has almost always had them coming across as compressed, clipped and small sounding.

Sigh, as groundbreaking and unique as each of their 12 albums have been, remain plagued by the issue of sonic confinement. The psychedelic, orchestral, and jazz layers mainman Mirai Kawashima, multi-instrumentalist Satoshi Fujinami, drummer Junichi Harashima, saxophonist Mika "Dr. Mikannibal" Kawashima and guitarist You Oshima generally employ are harsh and jagged as opposed to smooth and rubbery — imagine taking LSD in the inviting surroundings of a Haight-Ashbury crash pad versus being administered the drug as part of a military experiment. Synths that should peal with majesty and triumph tumble along more like John Cage instead of John Williams, if you know what I mean.

A song like "Satsui Geshi No Ato" (its more cohesive first half, at least) may be peppered with experiments drawn from the worlds of monk chanting, beatnik coffee shops, '60s folk and acid rock, but when it's time for the bongos, choral vocals and world music rhythms to spread their wings, its impact is muted. However, the Shrapnel Records-friendly solo cuts a path through the swamp quite vigorously. Possibly a metaphor to the power of metal? Listen to the intro seconds and rising mid-section of "Fuyu Ga Kuru" as it plinks out some classic Metallica ballad familiarity. However, the texture and dynamics are truncated, which ultimately hinder the clever use of serenading sax solos.

As this slippery sonic slope has been, and remains, a Sigh staple since before the creation of time, one might make the assumption it's a deliberate part of their aesthetic. Either way, despite all our expressed negativity and continued production misgivings, it remains fact the band still continues to offer top of the line outbound spins on metal and music as a whole. They may get automatically lumped in with black metal at the hand of their early works, but there's been no stopping their barrier stretching of the NWOBHM, the collected works of Tom Warrior, blasting grind, thrash and death metal via adjuncts of horror soundtrack eeriness, snippets of Ravi Shankar ragas, smoking jacket jazz, frilly shirt classical and Voivod-ian blotter and bong rips.

"Kuroi Kage" lumbers along like the minor key offspring of after a week-long Halloween, The Thing, They Live, Goblin, Trouble and Candlemass bender replete with dusty church organ spookiness that taps into Paul Shaffer's expansive repertoire. "Shoujahitsumetsu," on the other end of the spectrum, is a balls-out baroque blasting combo of Emperor and Brutal Truth that stops and spins on a dime to use smatterings of weirdness falling somewhere between Journey and the Melvins. "Shouku" and "Mayonaka No Kali" are both as straight-forward and stadium-friendly as Sigh has ever shown themselves to be, the pair of songs acting as a celebratory co-mingling of Samael and fellow Nippon superstars X-Japan and their indulgent Art of Life album.

Still, the biggest issue confronting Shiki is how Sigh continued to be handcuffed by a narrowed production quality and sonic sphere that doesn't match the grandiosity of the source material. Mirai and the gang are still showing off their ability to cohesively genre-slice vast combinations of influences — i.e. the creepy synth-addled, B-movie crawl, finger drums draped in polyester bellbottoms and spittle-flecked punk of “Shikabane” and how the Eastern-hued, psycociblin ambiance of “Touji No Asa” insidiously loops into seemingly innocuous interlude snippets “Kuroi Inori” and “Kuroi Kagami.” In turn, they demonstrate that not only does that source material continue to be fucking stellar, but so are the flickering mad scientist minds warping things to their creative advantage.