There is no band like Black Flag. And I can say that finally in present tense because they're back! Joy of fucking joys. One of the premier hardcore-punk bands largely responsible for shaping/influencing hardcore-punk and a plethora of other genres such as grunge (does that even exist anymore except in past tense?) has decided to return after being defunct for twenty-fucking-seven years. The last few years has apparently been the time to reunite units (e.g.: Iggy and the Stooges, Carcass, Modern Life is War, Bl'ast, etc, hey can we get some more fucking Negative FX?). And you know what? Good! Sometimes contemporary records feel grossly uninspired and distant from their source material—from the greats. But thank the friggin gods, the heavens have parted and blessed our sorry asses with a new Black Flag record!

Enjoy that last dose of sarcasm? Good. We've got a trek ahead of us and you might need to refer to it occasionally to cool off because I intend to murder this album with extreme prejudice.

Let's start this off with a brief introduction. I love, love, love, Black Flag. I do. Keith Morris, Ron Reyes, Dez Cadena, Henry Rollins—there isn't an era of the band I won't listen to (well, until now). Their assault even today is volatile and uncompromising. This was a band that caused havoc and destruction and got busted by the cunts in the L.A.P.D. on numerous occasions just for playing or for “nuisance in public or something like that.” Here's the thing: if your band got to play with them, they probably destroyed you. And they weren't any different on their eighteen releases, despite guitarist and brainchild (and perhaps the biggest jinx to the band) Greg Ginn's ability to alienate listeners, often moving the band's sound along faster than listeners could handle.

So What The… fuck do we have here? What's this? What is this shit in front of me? I actually bought this. My money went to helping pay for the pressing and recording of this record. The band did release a stream of it on Stereogum a month or so ago but know that that's been taken down long since the Ron Reyes departure. Yeah, he's out of the band. Again. But don't worry. I suffered through the forty-minute run time enough to give you people the good news. Happy holidays, assholes. You're welcome. If I can save some souls here, good.

What The…, aside from being aptly, even hauntingly, self aware in its title, is a wretched album. For those that have known Black Flag as a band that moved ahead of their fans and contemporaries, know that they've finally fallen far behind. What The… is less of an album and more of a rushed smorgasbord of half-assed riffs and dull execution. From the first to the last track, this album you're going to notice a theme with this album: guitar leads.

What The… is under the delusion that its a dirty, thrashy, hardcore-punk album that's pushing every song for all the adrenaline it's worth. And really that's all the effort this commands. Throw in some lyrics that'll leave you shitting corn, some of the most generic drumming on any punk record, and artwork that looks like it was puked onto some cardboard, and you've got this album. The thing is, the guitar isn't so bad but it's trying to out-perform itself track by track with no variation. First track? Funky lead, boring execution. Second track? Funky lead, boring execution. Third track? Funky lead, boring execution. And so on and so forth. And yeah, the playing isn't that bad talent-wise, but it all sounds so uninspired and tired, as though it grew bored of itself. Even when Ginn tries one of his signature “anti-solos” it sounds like shit. And while we're talking about guitarists, just for the record: at the moment Dimitri Coats > current Greg Ginn. Fact.

There is some variation in What The… but it's on the B-side and by the time that comes around the album's atonal approach has fermented and made the whole experience stagnant. Slower sections sound just as generic as the faster ones. It's worth mentioning that they exist but it doesn't mean shit when they don't serve to improve an iota of this album.

Really, once you hear one track on What The… you've heard them all. There are no stand out tracks. Everything blurrs together like a kindergartener's finger painting. No distinguishable shapes or bright stand out sections, just an amalgamation of slop. And this is coming from a guy who champions powerviolence and fastcore (all hail the deceased Xbrainiax, drink the wine), genres famous for brief bursts and breakneck writing that oftentimes blurs together. Black Flag's songs and lyrics are so interchangeable that the album stoops to a level of cut and paste writing. Instead of going off the deep end the way Family Man did, Ginn and company play it safe. Its embarrassing to listen to and to know I've actually purchased this. Why did I purchase this?!

And before I bring myself down, before I put bullets through this record in my backyard in these city limits I reside in, you'll notice that there are no sample songs on here. Why? Because the when Ron Reyes quit the band pulled everything off the internet. From their music video for “The Chase” to “Down in the Dirt” and “Wallow in Despair.” Their site is little more than a logo. Their Twitter, Facebook, and Instagram are silent. So instead, beneath these venomous paragraphs I've penned, I'm going to post something better for you. I wanted to put up something like the Xfliesx classic “Please Break Up Before You Embarrass Us All” or a funeral song of sorts, but I found something better. Something more appropriate. Something that can summarize this album simply.

Bottom line: this is Shit with a capital S. I'm usually excited for a band to get back together but after listening to this band for 10+ years and reading every aspect of their history I've been able to get my hands on in a variety of books over the years that is too large to post on here because I'll go over my word count (which has already happened anyway, sorry Jeremy, but when I'm pissed I don't stop until my knuckles are raw), I can't help but wonder why Ginn even bothered with this. And while mulling this over, I keep referring to this line I wrote in the opening paragraph: “Sometimes contemporary records feel grossly uninspired and distant from their source material—from the greats.” Black Flag's past will always be great but their present form is laughably bad. But let's not be so glum. I recall there was a really fantastic album released last year in the vein of old Black Flag and Circle Jerks. It was a self-titled record called OFF!. Go grab that instead, it's awesome. Fuck this.

*Photo taken from the I Heart Powerviolence Facebook group

In this article: Album Review, black flag, what the 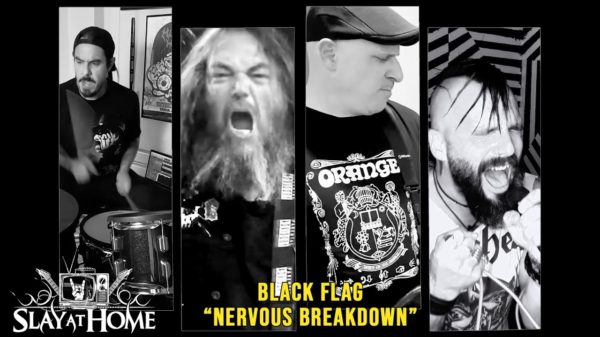