TESTAMENT's Alex Skolnick Wrote A Rap Song "Trump Sucks," And You NEED To Hear It 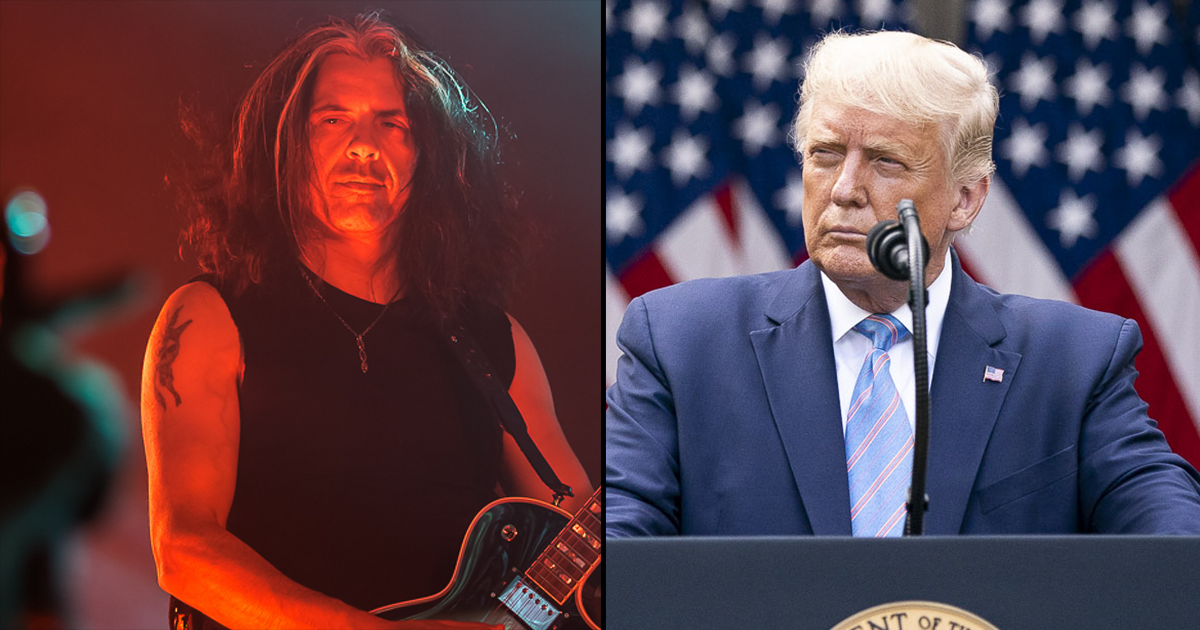 We give Testament frontman Alex Skolnick a lot of credit. He is putting himself out there, and even showing off some of his rap skills. The legendary thrash guitarist made waves last week when posting a message on social media imploring fans to vote against Trump. As a result of the backlash he recieved for the post from "MAGA world," Skolnick decided to quickly record a rap song highlighting all the reasons Trump sucks.

“Who knew Alex could spit bars like that!?” asked Machine Head's Robb Flynn after seeing the video.

First, let's take a step back. Last week, Skolnick posted a message to social media about his thoughts on Trump. He began with a disclaimer: "If you hate thoughts on politics, please read no further (it’s on you if you choose otherwise)" Once that spoiler alert got out of the way, he began to give his opinion on the current political landscape.

There’s a Presidential election coming up, not sure if you’ve heard? (I’m kidding. That shouldn’t have to be spelled out, but here we are). I’ve been relatively quiet considering the fires that are going on (literally & figuratively), doing 90%+ music-related, non-political posts. Yet that’s still too much for some, so a warning: A few more such posts may be coming between now & the election. A common complaint by characters such as the ever-ranting Don Jr: “These entertainer types are trying to tell us how to think!!” (Hey @donaldjtrumpjr: Stop being a f-cking snowflake).

No one is telling you how to think. It’s more like this “Here’s how I feel based on real world thoughts & experiences, not someone yelling on TV. If it’s not asking too much may you consider a different point of view?” Let’s stop the name calling & accusations that so many do. Honest question: Are you “conservative” and afraid of “radical” ideas? Well here’s the most radical concept there is: Refusing to commit to a peaceful transfer of power in the event of an election loss. That is RADICAL & HATEFUL OF AMERICA. Those who agree with me on this include more conservative/pro-2nd Amendment folks crossing party lines (at least on the top of the ticket, for POTUS) than ever before in history.

Imagine if things were reversed? Suppose you had this many Democrat-leaning folks running for the hills from the current Dem POTUS, 99.9% of the Dem party in fear of saying anything our Prez might not agree with for fear of an angry tweet storm & riled up constituents?? If that were the case, I promise you I’d be proudly voting Republican this one time. Yet this IS what’s happening, only the other way around. Therefore I believe it’s more urgent than ever we vote out the one who expresses that view & not vote for anyone who supports him. Please don’t give me a “But…” “What about…” “It’s BOTH sides” No. No no no. Just no If you use an out of context quote to make a point, you have no point. Ok. Rant over? So: ARE YOU REGISTERED 2 #VOTE? @nerdsvote can help!

After the flood of negative comments from Trump supporters that Skolnick got, he decided to do something about it. Last night, he wrote on Twitter "Trump fans who flooded my timeline with angry replies the other day: Thanks for inspiring me to try something different: Rapping. I wrote this for you – It’s called Trump Sucks"

The bars that stuck out to me were “Sycophants and cronies/ Keep him in power/ Pissing on our norms/ Like a golden shower/ A life failing upward/ Not a heavy lifter/ An upscale slumlord/ Two-bit grifter.”

Watch the whole thing below. Do you think Alex has a rap career? Also, will you be watching tonight's Presidential debates?