As September 18th draws ever closer, the riff-hungry troops of doom are stocking up on earplugs and rolling papers, preparing to follow the sign of the Southern cross down towards their own uber-resinated version of Mecca. Past the Mason-Dixon line and just shy of Hell itself lies their destination –  Asheville, North Carolina, which, thanks to a bevy of bands and some seriously ambitious promoters, is in turn gearing up to bear witness to the heaviest gig of the year. With the Metal Injection-sponsored (you're welcome) Planet Caravan Festival right around the corner and excitement running higher than Bobby Liebling on a day that ends in "y," we here at Metal Injection figured it was high time we gave y'all a peek behind the wall of sleep and unveiled a brand-new interview with those freshly resurrected, impossibly heavy and inescapably vital purveyors of cosmic, mind-altering "doom with a capital D and six extra O's," YOB.

Resident feedback worshipper Grim Kim caught up with YOB's Mike Scheidt for some gnarly Q&A action about stellar new record The Great Cessation, Planet Caravan, and the neverending triumph of DOOM (in all-Caps, of course).

Grim Kim: First off, I’ve got to say – the new album RULES, and I’m hoping that more people start exploring your phenomenal back catalogue because of this release. Which YOB album are you most proud of – or is even asking that the equivalent of telling a mother to pick a favorite child?

Mike Scheidt / YOB: I am glad you like our new album! Yeah, it is pretty hard to pick one favorite album for me. I can easily pick them apart all day long as my worst critic, but each one has their own vibe and progression and are a piece of our history. We were excited about each one at the time they were being released, and the early albums in particular were very exciting to us. Not that we don’t get pumped for every release but it was a golden time back then to realize that our band was being well-received and that things were happening for YOB in ways we could have never imagined. That is still true. But all of that being said, our new one feels the most “complete” to me as far as cohesiveness, performance and songwriting.

GK: What can you tell me about The Great Cessation – what was the songwriting process like, where did your inspiration for the songs come from, and how did you end up working with the infinitely-badass Profound Lore?

Mike S: I had two songs written("Breathing From The Shallows "and "Burning The Altar") when Travis and I started jamming. When Aaron joined the band the rest of the album pretty much “happened”. I started writing like crazy and all of a sudden we had a new album ready to record. I contacted Chris and Profound Lore awhile before the reunion happened. I knew I was going to write an album and had been hearing great things about Profound Lore from a number of people who have worked with him, people whose opinions I value greatly. Lucky for us Chris was interested and I sent him demos of the stuff I had been working on. He was way into it and things flowed very naturally from there on with us. Chris Bruni and Profound Lore are the real deal.
Inspiration wise, I think some angst from the Age Eternal lawsuit played into The Great Cessation. Plus I have been listening to lots of necro/extreme metal( Black Witchery, VON, Portal, Morbosidad, Profanatica, etc) and I think that has made its way into this album as well. But I do feel it has many of the elements YOB is known for and it still is recognizably YOB. Just a bit more brutal consistently throughout the album.

GK: How does it feel to be back?

Mike S: FANTASTIC. The chemistry music and personality wise between Aaron, Travis and myself is amazingly fun. Plus YOB grew in its absence, so it’s a trip to have so many more people paying attention to us. It’s a great time to be alive and kicking in the HEAVY.

GK: It’s a great time to be in a doom band; it seems like people are finally starting to sit up and take notice of just how awesome heavy music can be, and the genre (and all of its post-y, sludgy, and experimental-y offshoots) has been getting a good amount of attention lately. What is it about truly heavy music that you think appeals most to people?

Mike S: I think in every era of modern music there have been bands that people have gotten into fully that are heavy, whether it be Black Sabbath, TAD, Godflesh, mid-era Soundgarden and Dirt-era Alice In Chains and whatnot. So the leap to a band like YOB isn’t that far. Plus with all of the fast paced music out there, it has been only a matter of time before folks started hungering for something different. Plus DOOM as a distinctive style has been alive and growing for over 20 years in the underground. So for people who want to start looking into DOOM there is a impressive history of killer, quality bands with covet-worthy back catalogues. Not to mention the modern bands that encompass every walk of the HEAVY from retro proto-DOOM to modern DOOM pushing genre boundaries and everything in between. It is a rich style with lots to offer the new listener and keep lifers like me hooked in and loving it as much as the first time I heard DOOM.

GK:What is it you personally love most about doom, and why did you decide to become involved in it in the first place?

Mike S: I guess I got into this question in the last response a little, but ultimately I love DOOM because it’s  very honest and sincere. You can hide a substandard set of riffs in speedy tempos, but not in a slow one. The vibe, power and quality of a riff has to be total, or else it seems contrived and forced. Plus there is an amazing combination of  the primordial, darkness, and celestial vibes fused with honest emotion in the best DOOM bands. It hits places in me that no other style of music does. It was true in 1981 and it’s still true today for me. I had always been into Sabbath, and certainly was exposed to and bought Trouble, The Obsessed and Candlemass albums in the day. But it wasn’t until I bought Forest Of Equilibrium and saw Cathedral live in 91’ that my songwriting took a drastic turn. Around the same time I was exposed to SLEEP, Count Raven,  Revelation, Pentagram, Blessed Realm, Wretched, Unorthodox, etc. That was pretty much when I started getting way into DOOM as an actual style.

GK: What can you tell me about your involvement in the Planet Caravan fest? How did you end up playing, which bands are you most excited to see live, and will you be playing any other East Coast dates while you’re out here?

Mike S: The folks putting on the festival contacted Nanotear Booking and Nathan Carson (our booking agent) and made us an offer that financially allowed us to do it, which is amazing. Then we find out that Orange Goblin, Pentagram and Clutch are playing?!? Holy shit, we are stoked. Sadly we won’t be doing any other east coast dates but we do intend to get out there sometime in 2010 if all goes well. As far as bands I want to see, the guys from Orange Goblin are dear friends and we haven’t seen them since we toured with them in 2005 so it’s going to be incredibly wonderful to see them live and chill again. I am looking forward to seeing Pentagram(of course), Orchid, Salome, and Clutch too.

GK: I’d like to ask you for a track-by-track breakdown of “The Great Cessation;” tell us about the lyrical and musical ideas going on in each song, as well as any personal anecdotes or impressions you have of each song, if you will?

Mike S: This is where I get a bit vague and dodgy as an artist. I don’t like to get too descriptive about specifics of song lyrics these days. I want a listener to have an original experience with each song, and if I tell them what the song is “about”, then I essentially take that opportunity away from them. When someone asks me one on one in person I feel very comfortable doing it, as I am most likely able to hear their feelings about the song and its meaning to them personally in the conversation. I dig that, whether it’s positive or otherwise. I will say that people’s reactions to the song "The Silence Of Heaven" has been fantastic. Because it’s been truly divided between people who love it and people who either are  sourly ambivalent to downright saying that it sucks. In this day and age where what we do is more well-received and understood by more folks, it’s great to have a song that is pushing comfort levels and is truly extreme within our framework. The folks who “get” the song hear it in the way I intended, which is desolate, abrasive, desperate and disillusioned. It is meant to hit the lowest low, and scream frustration with the “rules” of this life and Life’s ambivalence to our beliefs and ideas about God, truth, good and evil, etc. But it is hitting bottom, it is not the end of the story. It sets the stage for "Breathing From The Shallows," and then the final ending in the song "The Great Cessation," which is arrived at with the realization that the disillusion and anger that is discarded in defeat makes way for a vision of how things are that is strangely comforting and real, and allows the mystery of reality and life to be appreciated more deeply…. once hope and the clinging to our human metal constructs are seen for what they are and what they are not.

*Thanks a lot for your time – doom on!

*The two-day Planet Caravan festival is going down on September 18th and 19th, and in addition to Clutch, Pentagram, Orange Goblin, Orchid, Kylesa, Burst, Yob, Wino, Tombs, Bison B.C., and The Gates of Slumber, lucky ticketholders will be treated to monolithic rumbles and earth-shaking riffage from our super awesome buddies in Salome, Sourvein, Zoroaster, Hull, Batillus, and more! Walk, crawl, hitch, or fly – unless you're stone broke, overseas, or in the clink, you have NO excuse to miss this gig! Tickets are available at the official Planet Caravan website. 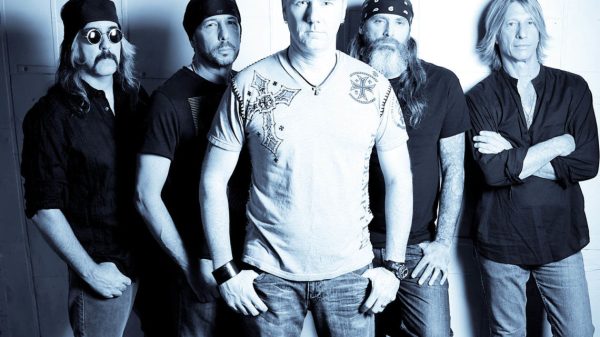