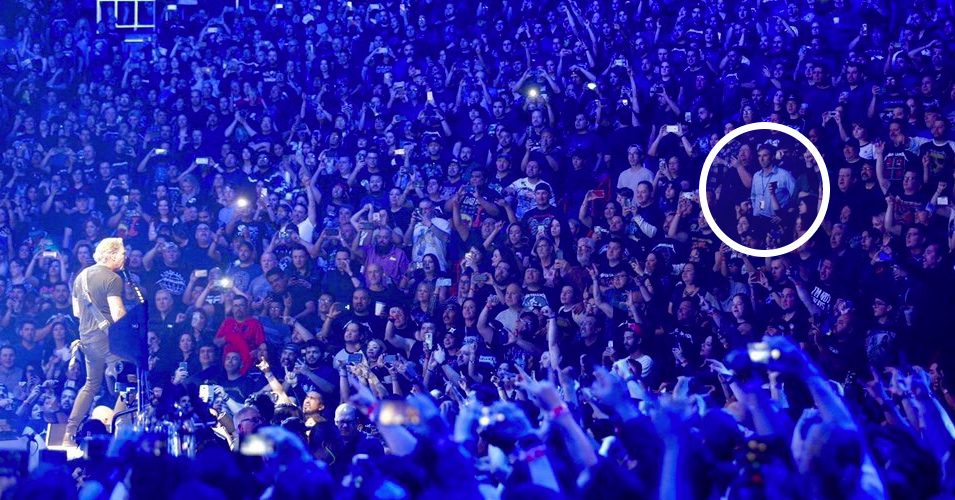 The last time we wrote about Texas Congressman Beto O'Rourke was when he was "exposed" by the GOP for being in a band once with The Mars Volta singer Cedric Bixler-Zavala.

Beto ended up losing to Ted Cruz for the coveted Texas Senate seat (while also helping elevate progressive Democrats down the ballot) and is now pondering, slowly, if he should run for President. He took a break from making that decision to catch Metallica's show in El Paso, TX on Thursday, February 28th and was spotted by a very enthusiastic fan.

@BetoORourke just keeps proving how awesome he is. He was at a @Metallica concert. That is just awesome and I can’t wait for Beto O’Rourke to announce for President #Beto2020 #BetoForPresident #BetoForAmerica #2020Election pic.twitter.com/jb9ifbnzXC

Checking in with Twitter, it seems Beto has a Metallica past:

I do not want to talk politics. I could careless if you are a Republican or a Democrat or something else. As #Metallica fans though, we all must admit at the very least, that Beto O’Rourke is cooler than every other politician. #Metallicast #MetallicastMilitia pic.twitter.com/CYguZK3uS9

So my dad drove the lead singer of Metallica and also bumped into Beto. He’s living the life ? pic.twitter.com/9m0fYKKdBA

Beto: I’ll make my decision by the end of the month
Everyone: he’s going to announce his run for presidency February 28th!
Beto: *goes to Metallica concert* pic.twitter.com/Se2ltVQPeS

I’m not really sure why everyone isn’t talking this morning about Beto O’Rourke going to a Metallica show last night. This is really upping the skateboard tricks situation.

One thing Beto has going for him is that he's not a fossil like most people in Washington, D.C.. He's pro-marijuana legalization and has spoken out on many issues like #BlackLivesMatter. One thing he doesn't have going for him, as a Democrat, is his lack of support of progressive causes including Medicare for All. He seems lukewarm on the Green New Deal and other issues progressives care about. But this isn't a political site, this is a music site.

It's cool that Beto took some time to catch a Metallica gig, and clearly had some fans in the stands next to him. I wonder what his favorite Metallica song is.  He even got to see the band perform "Here Comes Revenge" for the first time.

Of course, leaders going to metal shows isn't a new thing. Even Donald Trump attended a metal gig – him and his family can be seen awkwardly dancing to Twisted Sister a few years ago.