The 10 Best BLACK SABBATH Tracks… Without OZZY Or DIO! 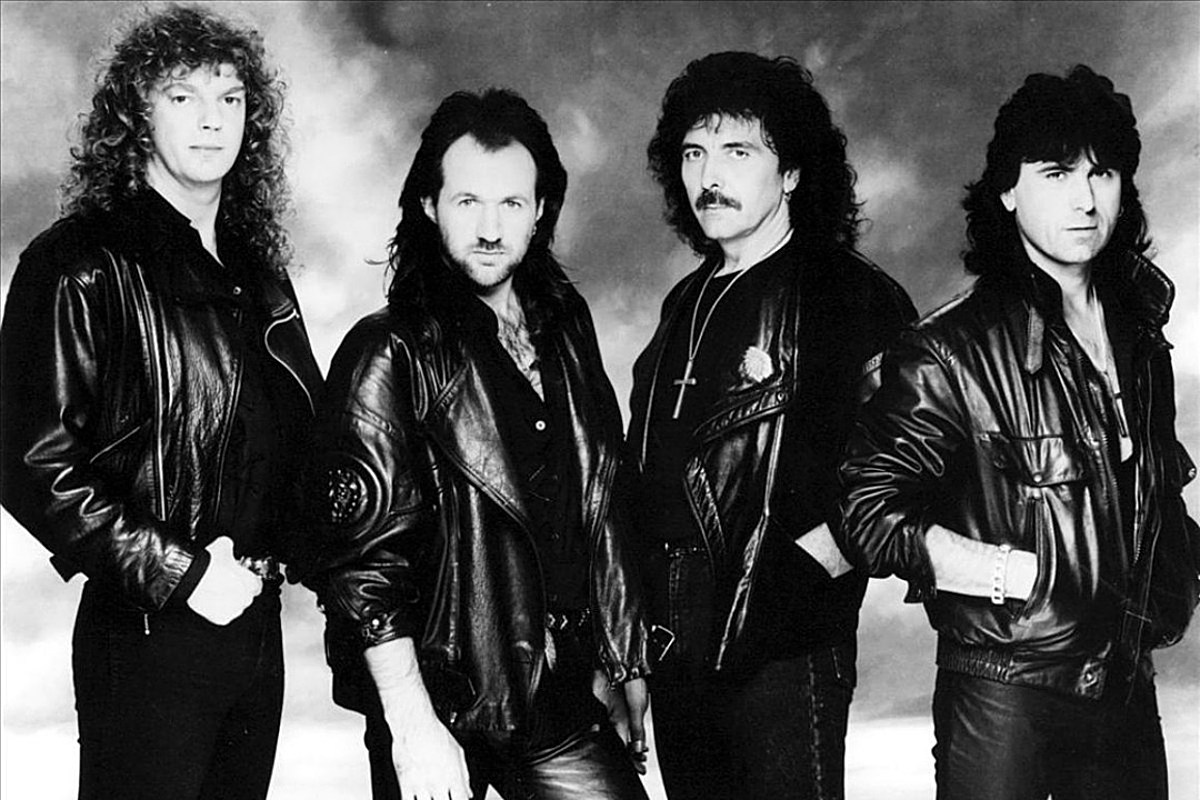 For many people, the name Black Sabbath is synonymous with four men – Ozzy Osbourne, Tony Iommi, Geezer Butler and Bill Ward. For others, that line up expands to include Ronnie James Dio – who recorded three great albums with them – and maybe to a lesser degree, Mob Rules and Dehumanizer drummer Vinny Appice.

Of course, anyone more familiar with the band than just Paranoid, Master of Reality and Heaven and Hell will tell you that the Black Sabbath story goes much deeper than those six men. The legendary group has featured no less than 27 official members throughout their 40+ year career, some lasting decades, others months at most. Only the great Tony Iommi has been constant from day one to their 2017 retirement. Lots of high profile names have come and gone through the Black Sabbath ranks, including Ian Gillian, Cozy Powell, Glenn Hughes, Eric Singer and Bob Daisley. What’s most worthy of note is the underrated Tony Martin actually has fronted more Black Sabbath records than Dio, helming the mic on five studio releases.

What is a travesty is the amount of great material that has been forgotten by many fans from this period of Sabbath; sure, it’s not all gold, but there are a lot of songs that are more than worthy of the Black Sabbath. Finding legitimate avenues to access this period of Sabbath, both digitally and physically, is a tough task. But thanks to some intrepid Youtube channels, the music is out there, perhaps against the wishes of one member’s management (you know who we’re referring too…)

Truth be told, it was hard to keep this list to just 10 tracks – the more you dig deep into the Black Sabbath catalogue, the more excellence you find, so consider this article as something of a introduction to this period of the band; 10 great tunes handpicked from the seven albums outside of their most recognised frontmen.

Kicking off our list is the excellent "Ancient Warrior," from 1986's The Eternal Idol. The record serves as the starting of a new chapter in Black Sabbath's history, as it's the first with the long running frontman Tony Martin – however he wasn't the original vocalist choice. The late Ray Gillen was tapped to front the band, but left during the lengthy recording process. Comparing the two side by side – thanks to the original demos coming to light in 2010 – it's no doubt though that Martin's vocals worked better in the end. The album's second track "Ancient Warrior" is a classic, forgotten Black Sabbath gem. Great playing from Tony Iommi with an immediately memorable chorus, it's vastly under appreciated, and is could have easily slotted into any other period of the group. Other choice cuts from The Eternal Idol include "Born To Lose," "Glory Ride" and the fantastic opening song "The Shining".

The moody and melodic "Anno Mundi" is the opener of the criminally underrated 1990 album Tyr. The 15th Black Sabbath record, the third fronted by Tony Martin, and also second with immense drumming talents of Cozy Powell. Tyr's problem was that it's sound was out of touch with what was commercial and critically popular at the time – far from hair metal, more melodic than thrash metal and more uptempo than the more doomier classic Sabbath material. But if you listen to "Anno Mundi" on it's own merits – a hard rock track at the turn of a new decade – any Black Sabbath fan can surely appreciate it. Martin and Powell's contributions perhaps overshadow Iommi's guitar work, which gets a little lost in the mix, but their respective vocals and drumming are the stars of the show.

There’s no bones about it – Born Again was considered a colossal disappointment when it came out in 1983. The first album post-Ronnie James Dio, it featured no less than Deep Purple’s powerhouse vocalist Ian Gillian and 3/4ths of the ‘classic’ Black Sabbath lineup (san-Osbourne, of course). Unfortunately it was bogged down with awful production and boasted truly terrible cover art – but is it hardly deserving of the derision is receives. One of the LP’s high points is the huge “Disturbing The Priest”, packed with big guitar riffs and an evil atmosphere, it’s the heaviest number on the record for sure. Other standouts include “Trashed”, “Zero The Hero” and the underrated “Hot Line”. Born Again is hardly the finest thing Sabbath ever released, but far better than it’s general perception, and worthy of a revisit.

Arguably the best full length the band recorded outside of the Ozzy/Dio era, 1989's Headless Cross features some truly great Black Sabbath material. It features inspired performances across the board, from Iommi dishing out huge riffs and the thunderous drumming of Cozy Powell, as well as Tony Martin contributing lyrics for the first time on his sophomore Sabbath album. The title tune is absolute massive, and the mid-paced opener certainly has more than a nod towards "Heaven and Hell" with it's bass driven verses, but the huge pre-chorus/chorus is a real highlight from this era of Sabbath. It's such an easy song to like track – no exactly a ground-breaking piece of music – but just a great, fist pumping metal anthem that never really was.

Cross Purposes’ saw Black Sabbath bring back Tony Martin into the fold after Ronnie James Dio’s second departure following the Dehumanizer tour. The 1994 record see’s Martin lose none of his power – however it’s not a stretch to imagine that  Iommi and Geezer Bulter had Dio in mine when they penned the opening track, “I Witness”. It’s a real foot-to-the-floor barnburner, and quite an interestingly structured song – it’s all uptempo, high bpm stuff, until the halfway where the chorus/bridge passage takes over and drops it back to a halftime feel. Sadly, yet unsurprisingly, Cross Purposes tanked in the USA and the UK – but for those who haven’t heard it, it’s a great record and couldn’t get a stronger start with “I Witness”.

Despite being dubbed by critics at the time as Black Sabbath's worst effort, Forbidden does not deserve the bum-rap it cops. It's a bit uninspired, and the opener "The Illusion of Power," featuring Ice-T is a weak way to start the record. But there is definitely some pretty good stuff on here, "Get a Grip," "Guilty as Hell" and the track we've gone with, "Kiss of Death". It's a great piece, with lots of moody clean guitars and big riffs, and the classic speed up closing section. Noteworthily the final song on the album, it serves as the last Black Sabbath tune with Tony Martin. Body Count member Ernie C's production and mixing is pretty good – as in, it sounds like what you'd expect from Black Sabbath using mid-90s, with no real curveballs or curios thrown in. Approach Forbidden cautiously, but there is some worthy material for the brave to hear.

Never intended to be a full blown Black Sabbath release, Seventh Star was meant to be a Tony Iommi solo record. Thanks to a last minute change from Warner Brothers, the 1986 release ended up being rebranded as the confusingly titled Black Sabbath featuring Tony Iommi. Seventh Star was recorded with another ex-Deep Purple luminary, this time Glenn Hughes – although he didn’t last long after the LP dropped, replaced on tour after five dates in by Ray Gillen. The album definitely is the biggest departure from the ‘classic’ Sabbath sound – more bluesier and ballad-orientated than anything the group released before and after. The emotional “No Stranger To Love” is the most well known tune from the underwhelming collection of songs, but it’s the title track that has the slowest, most Sabbath like sound to it. It’s crawling pace and slow burning feel harkens back to their style of old, and is far stronger and engaging than most of the other material on the fairly patchy, dated release.

Another choice from the criminally underrated Tyr, it was a tough decision to put only two tracks from this album into our list. “Jerusalem” and “The Sabbath Stones" could easily gone into this article, but the soaring “Valhalla” is such a strong song, and one of the best from Black Sabbath’s Tony Martin-era. It’s worth checking out the brief proceeding interludes “Battle of Tyr” and “Odin’s Court”, both of which serve as a prelude that seamlessly meld into “Valhalla”. It’s quick pace almost gives it a Iron Maiden-esque vibe, and it’s loaded with hooks from across the entire band’s performance. As touched on before, this style of metal was terribly uncool in the USA/UK in 1990, however I can confidently say if “Valhalla”, and the Tyr as a whole, was released earlier and perhaps by an act without the burden of such huge expectations, it would be much more lauded back then and today.

Released in the mid 90s, it’s not a huge surprise that Cross Purposes at times sounds like the next generation of artists, certainly influenced by Black Sabbath, have themselves influenced the band. “Virtual Death” certainly has an Alice In Chains vibe to it, with a grinding slow riff and harmonised vocals. It makes for one of the more doom-y and old-school Sabbath songs recorded during with Tony Martin – and unlike a lot of the Black Sabbath material at the time, it’s one that could easily be performed with Ozzy. It’s an absolutely crushing and hooked pack track – the off-time snare in the chorus is such a clever twist, and perhaps even more so than the earlier mentioned “I Witness”, “Virtual Death” has Geezer Bulter’s fingerprints all over it. Arguably the most underrated of all the choices on this list.

Another track from Headless Cross, this time the excellent “When Death Calls”. While the album’s title number was a fist-pumping, uptempo anthem, “When Death Calls” packs way more mood and dynamics. It’s got understated verses and a utterly massive chorus, which climaxes with a thunderous crescendo after the tempo-quickened bridge. While Sabbath were seeing their commercial returns diminish as they went deeper into the 1980s, Tony Iommi’s ability to compose a great music has not waned one iota. Plus it features Queen’s Brian May ripping out a tidy solo. Other noteworthy songs worth checking out off Headless Cross are “Devil & Daughter” and the excellent “Black Moon”.

What do you think of this period of Black Sabbath? Do you think it’s under-appreciated, or is no competition for the commercial and critical highs the band experienced with Ozzy Osbourne and Ronnie James Dio? Are there better tracks from these albums that we overlooked? Let us know below!