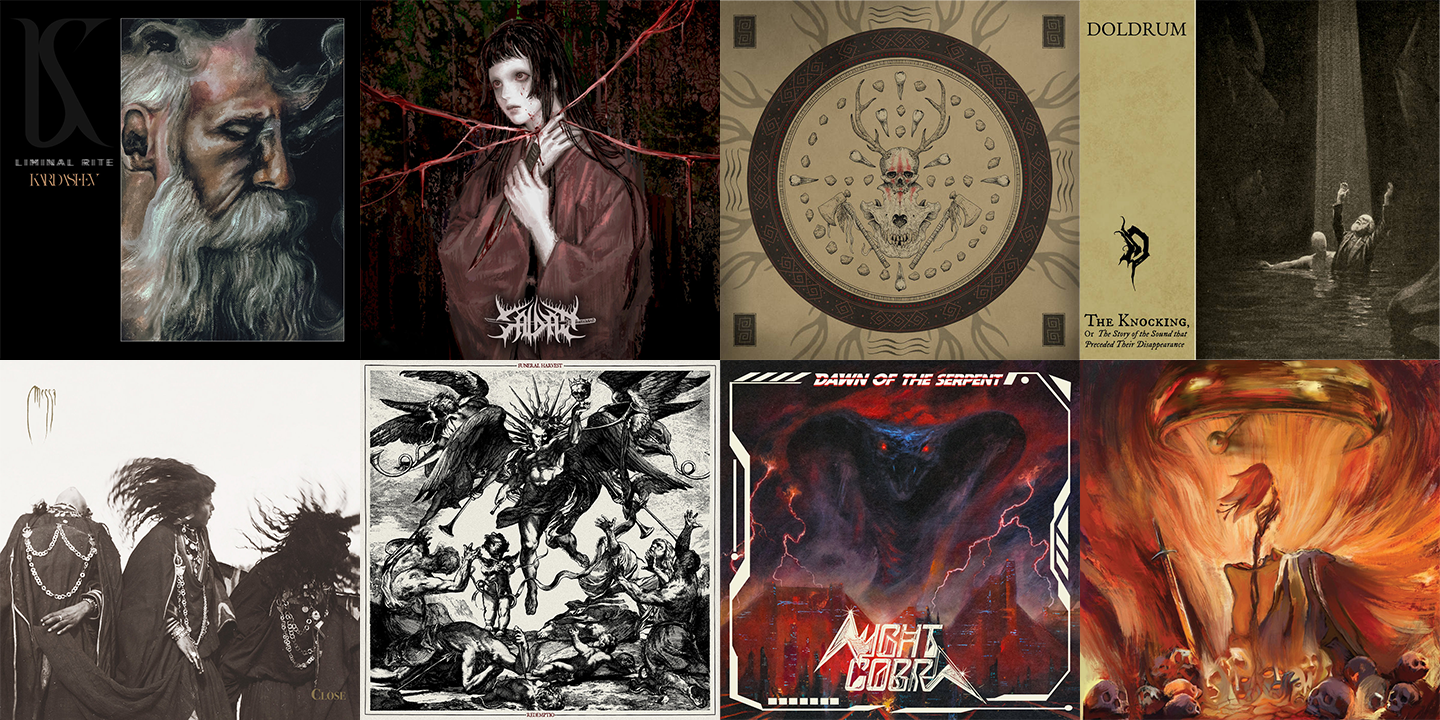 This year we're doing things a little differently. Instead of asking for lists from all our contributors, we posed one simple question – what's the best underground metal album of 2022? And sure, defining "underground" can be a real pain in the ass. We ultimately landed on "underground" meaning any artist or album that wasn't quite heralded as they should've been. That means any band from a small bedroom project to a recent major-label signing that hasn't gotten off the ground yet, even to bands that have a cult following but haven't broken into the overall conversation, were fair game. Basically stuff you might not have heard of.

Without further delay, here they are!

The argument that King Gizzard & The Lizard Wizard are not a metal band will persist if people continue to have time to kill debating such things. But here's reality: they write and have written many amazingly pure heavy metal songs, and Omnium Gatherum features some of the Aussie band's best.

"Gaia" and "Predator X" rip and plunder as some of the best stoner rock and thrash throwback anyone has made in decades. At the end of the day, does it matter that the rest of the album sounds like the Bee Gees ripping nitrous balloons like there's no tomorrow? No, it doesn't. – Dan Alleva

The follow-up to 2016's Echoes in the Wind, Passion of Depression was absolutely worth the wait. Harnessing a slighter fiercer and more focused direction, it upholds Lamentations' knack for classical and/or folk-tinged death metal. "Prodigal" sets the stage with a stunning mixture of electric and acoustic approaches, paving the way for the rest of the sequence.

Of course, each subsequent track does its own thing (for example, "Sombre" features welcoming vocal harmonies and "Ire" diversifies itself with synths and bells); however, each one also sustains that central winning formula. Thus, Passion of Depression should be in every metal fan's collection. – Jordan Blum

Night Cobra – Dawn of the Serpent

I am an admitted lover of NWOBHM, a speed metal freak, and a worshiper of '80s sci-fi and horror. Night Cobra, the latest creation from Christian Larson (ex-Eternal Champion, ex-Venomous Maximus, Necrofier, creator of Hell's Heroes, etc.), is a love letter to all of the things aforementioned, with Larson himself telling Metal Injection in March that the band is "a tribute to that retro '70s and '80s 'future past" feel.

The bands' latest studio effort, their debut full-length Dawn of the Serpent, is a kick-ass heavy metal cocktail dripping with nostalgia. Check out "The Neuromancer's Curse", "Run the Blade" and "Lost in Time" for a proper launching off point. – Dillon Collins

This album combines elements of acts I adore like Ne Obliviscaris, The Ocean, and Fallujah into one cohesive sound that's unlike anything I've heard before. Kardashev hit you with beautiful melodies that are juxtaposed with devastating heaviness throughout adventurous song structures.

Prog with catchy bits and heaviness? Was this made for me? Then, the story of the album is about a guy with dementia traveling to his childhood home and struggling to remember his past. So this record hits you in the tear ducts too. This is not only my favorite underground, but also my favorite record of the year. – Daniel Cordova

Redemptio is Funeral Harvest's breathtaking debut album. This blasphemous offering premiered five days ahead of schedule on October 26. Founded in Trondheim in 2016, Funeral Harvest had already attracted our attention by unleashing a demo, a single, and an EP.

Their guitarist and lead vocalist, Lord Nathas, hails from Italy. Lord Nathas works with Mare and Behexen's Wraath (a.k.a. Luctus and Afgrundsprofet) in Ritual Death and Fides Inversa, which was founded in Italy but currently features an international lineup. Wraath provided guest vocals for Redemptio's "Principium et Finis," "The Crimson Night Tide," and performed "Fire Sermon" as a wicked duet with Lord Nathas. Although Wraath's Beyond Man collaborator Enstad joined Funeral Harvest after Redemptio had already been recorded, he still managed to add his touch on guitar. Similarly, Saligia and Beyond Man's Ahzari contributed some backing vocals. – Jillian Drachman

Messa has experimented with anything from dark jazz to ritualistic ambience to push their music forward, but with Closer, they embrace world music and musical traditions from the ancient Near East to transform their Sabbath-worshiping roots. Their use of folk instruments meshes well with their pre-established fusion and prog elements, allowing rich atmospheres and elegant melodies to deepen their penchant for smokey riffs and bewitching vocal performances.

It might seem like an interesting detour, but Close actually sounds like something Messa has been building toward since their inception. The genre mash feels natural, tasteful and emotionally gratifying, transcending gimmicks and beginning a new era for one of doom's most exciting bands. – Max Heilman

With members hailing from Sweden and Denmark, Scandinavian bruisers Mass Worship's sophomore record Portal Tombs is a bulldozing 38 minute assault. While screaming layers of distortion and dissonance serve as the LP's bedrock, it's far from impenetrable noise, with Mass Worship knowing how to take the listener on a journey with strong songwriting.

Doldrum – The Knocking, Or The Story of the Sound that Preceded Their Disappearance

Doldrum is described as "Haunted Black Metal rooted in American folklore and the occult," which is unarguably dead on the money. The band weaves their way through the darkness via twisting and turning musical passages, storytelling through lyrics and the occasional foley, and tortured vocals that are sure to shred anyone's throat who dares try. It also helps that The Knocking, Or The Story of the Sound that Preceded Their Disappearance might be one of the coolest album names I've heard this year.

What I really love about The Knocking is Doldrum's adventures into clean tones and almost progressive passages. The Knocking is ultimately black metal, but it's got a lot going on and the writing is very clever. – Greg Kennelty

Talent is not something that Sumerlands lack in any sense; their doom soaked self-titled debut turned plenty of heads with an inexhaustible supply of it. So, why does sophomore effort Dreamkiller stray from the Sabbath way so dramatically? Well, because it's just as strong and twice as fun.

Tweaking old-school formulas to ridiculous levels of soaring unsubtle-ty, Sumerlands blend the traditional and overt without either hogging the limelight. The talent and your chugging guitar favorites are present, but supplemented by highwire choruses and that power metal urgency to make Dreamkiller an album you can't listen to just once. – Shaun McKenna

The Native American one-man atmospheric black metal project was unlike anything else released this year. Its sole member is Sgah'gahsowáh, who drew deeply from his heritage as he worked on the album in the Adirondack wilderness of upstate New York. The themes of nature, grief, spirituality and rebirth flow on tracks like "The River of Time Runs Through Me," and "Barefoot Ghost Dance on Blood Soaked Soil".

Blackbraid even finds space for traditional Native American instruments on the album's quieter moments. It's an awesome subversion for those who feel like the Norse pagan aesthetic has dominated black metal for too long. – Max Morin

Very little is known of the mysterious Galrog the Imperial, who is the one person American artist who performs under the moniker Lore Liege. What we do know is that Galrog makes one helluva black metal record that effortless harkens back to 1992. Dreams of a Forgotten Curse has the sonics and production of old school True Norwegian Black Metal. And tracks like "As Night Approaches" sound a lot like early Burzum.

The added plus is that while the music sounds like Burzum, it doesn't come with any of that Nazi bullshit baggage. But there's more to the sound of Lore Liege's sound and I hear a little touch of Tribulation here and there, a lot of Darkthrone, some early Satyricon and a bit of Taake. This is a cold and chilling four song EP that's absolutely perfect for winter listening. – Jeff Podoshen

With their fantastic 222 album, Saidan has achieved the ultimate goal of a modern metal band — taking a well-established sound and putting their own unique spin on it while preserving its core elements. Saidan's early work meets all the required specs for raw, straightforward black metal, creating a very workable machine of melancholy darkness.

But on Onryō II: Her Spirit Eternal, the machine has gained sentience. Songs like "Queen of the Haunted Dell" and "Girl Hell 1999" fuse raw black metal with punk and post-punk elements, giving them an irresistible catchiness that makes you heat the repeat button again and again. The album is oddly upbeat, almost poppy in a way you'd never expect from black metal. Oh, and I did the artwork as well, very reminiscent of Takato Yamamoto's work. – J. Zalucky 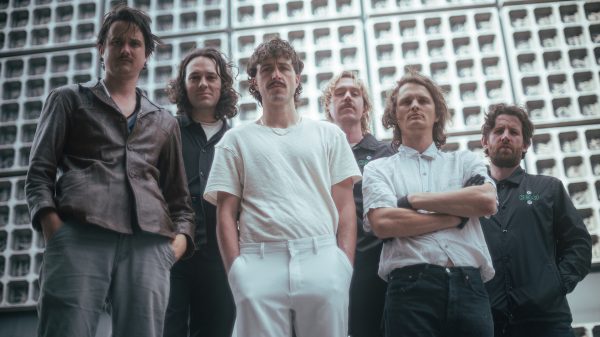 In true KGLW fashion, it's insane.