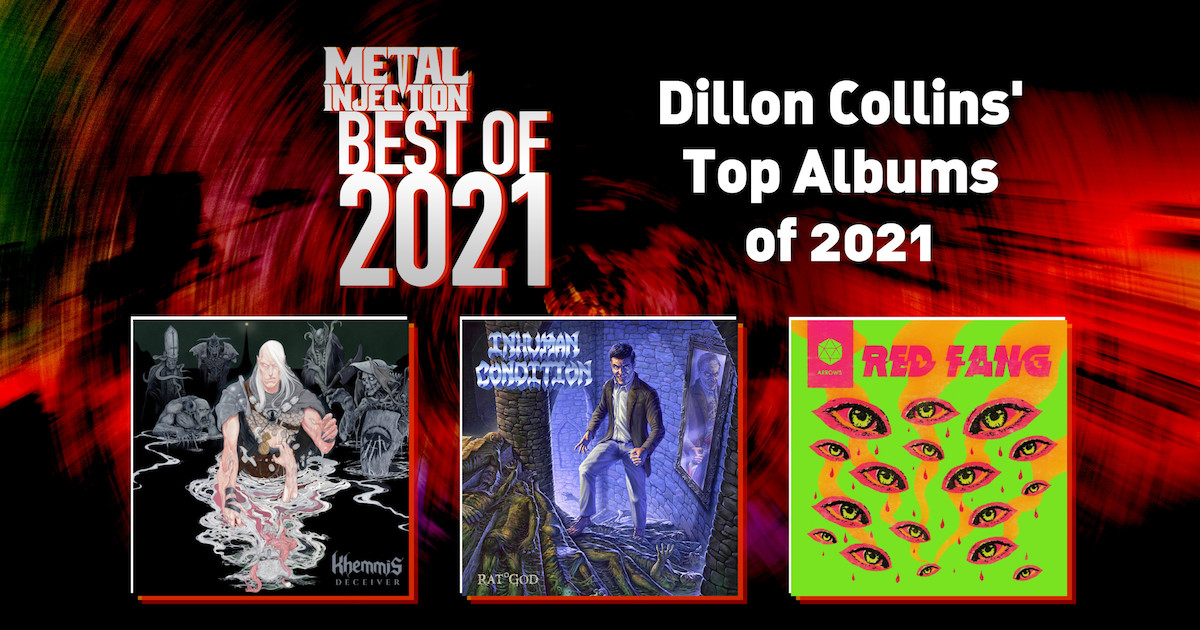 What a year. Truthfully, I didn't even want to rank these, but tradition is tradition. I started with a long list of 35 records that I whittled down to 20, then 15, before settling on 10. I can't ever recall in my years of doing this having such a ridiculous time compiling a year-end list. Perhaps pandemic housebound downtime makes for unreal metal magic. Who knows? But 2022 has its work cut out.

These lists are always divisive. Someone's favorites are bound to be left out. Someone is bound to be pissed off, likely those occupying the dark corners of Facebook. But in the end, how lucky are we as fans to have the metal output that 2021 has given us. All silver linings. To the metal!

Jeff Walker seemed to do everything in his power to dissuade fans from investing in this record, but Torn Arteries fucking rips.

A group that has never had a bad record in my eyes, Carcass had the tall task in following up Surgical Steel, the band's first new record since 1996. And while the merits of that argument are almost zero, Torn Arteries brings the heavy, with a fair share of groove, for a more than passable late-career entry for the Brit extreme metal masters. "Dance of Ixtab" and "The Scythe's Remorseless Swing" will be madness live.

Iron Maiden to me is like pizza. Even less than perfect pizza is still pizza. And you always want pizza. Maiden holds a very special place in my corroded metal heart. They're one of the bands that properly turned me on to an entirely new side of the genre, back when I was hopeless and nu-metal crazy.

Senjutsu could realistically be Maiden's best record since Brave New World. "Stratego" (one of the rare shorter tracks) gives serious Powreslave vibes, and even leadoff single "The Writing on the Wall" harkens back to a bygone era Maiden.

But make no mistake, Senjutsu is an exercise in excess. Following the path laid in The Book Of Souls, Maiden goes big in just about every facet. Songwriting, solos, atmosphere. It's big – perhaps too self-indulgent at times – but still damn near a masterclass of metal by one of the legit GOAT.

Portland's finest stonery sludgemuffins made us wait for a new record, but fuck was the wait worth it. Arrows is a throwback to "Prehistoric Dog" era Red Fang, full to bursting with chunky riffs, and grimy feedback and distortion that makes us miss those by-gone garage-era bands.

The self-titled single is the type of anthemic earworm that will be tailor-made for tours going forward. And if nothing else, we can toast the return of batshit crazy Red Fang music videos. "Why", in particular, is a demented fever dream. Chef's kiss.

Inhuman Condition is my most pleasant surprise of 2021. Every year there's this one new entry into the heavy metal genre that checks off all my boxes, and the genre vets of Terry Butler (Obituary, Death, Six Feet Under), Jeramie Kling (Venom Inc, The Absence, Ex Deo), and Taylor Nordberg (The Absence, Goregäng) did all that and then some on Rat°God.

These guys are pure death metal. No frills, no bullshit. If you want classic, old school, Florida death metal that gives you nostalgic Death and Obituary deep down in your gut feels, hook this into your veins. Play it front to back and don't concern yourself with track selections. This entire beast packs a fucking wallop.

The expectations for Rivers Of Nihil's follow-up to Where Owls Know My Name was enormous. Personally, the record topped my 2018 year-end list, so anything less than perfection was going to be somewhat disappointing for album number four.

The Work is a damn fine successor to Owls, though my gripes with it are more creative choices and nothing to do with production or performance. Rivers trades in the jazz-infused grandiose death metal opera for a more industrial and grinding sound and scope for The Work.

It's vast, desolate, and equally as haunting as its predecessor. Top marks go out for creativity. You'll never hear the same Rivers Of Nihil record twice.

5. At The Gates – The Nightmare Of Being

Much like Carcass, I have never disliked, or have even come close to disliking an At The Gates album. Some detractors wax philosophical on how the group hasn't been the same since the Slaughter Of The Soul era, but those folks are joyless anyways.

The Nightmare Of Being is everything I want out of At The Gates and melodic death metal in general. Chunky, explosive riffs, Tomas hitting every furious scream like he's getting paid on an aggression scale, the mix of atmosphere and the lights and darks. It's those moments between beauty and chaos – that mirrors life ironically well – that make this album a standout. "Spectre Of Extinction", in particular, is a ridiculously good album kickoff. A+.

I said in my mid-year writeup that I had noticed detractors begin to come out in waves to write-off Gojira as sellouts. Success tends to sour metal fans. Nothing new there, but it's damn near impossible to dismiss what this band has done in the past 20 years.

Those same detractors likely won't be converted with Fortitude. What you have though, for diehard fans and potential new recruits, is a record that blends the past and present of what could be the heir apparent touring act for arena 'rock' globally.

"Amazonia" is easily one of their more eclectic and impactful tracks in years, "Into The Storm" and "Born For One Thing" have massive crossover ability, while "Grind" and "The Sphinx" should more than satisfy fans of Gojira's earlier sound.

The holy fathers of extreme metal continue to do the goddamn thing without peers or equals, bludgeoning us half to death in this pandemic era of metal with Violence Unimagined. I am a Corspsegrinder die-hard, and love every Cannibal Corpse record he's had at the helm, but Violence Unimagined could be my favorite in over a decade.

"Murderous Rampage", "Inhuman Harvest", there are just too many standout cuts to name. The guys aren't reinventing the wheel. You know what you're getting from the Cannibal Corpse crew in the year of lord Ronnie James Dio 2021. It's pulverizing heavy, the perfect pick-me-up for our socio-political poison cloud. Long may they reign.

I am a massive, unapologetic Mastodon fan. Crack The Skye is on my shortlist of all-time great records, and Hushed And Grim – the group's somber yet bombastically proggy and psychedelic double album – is perhaps the best album the group has released since.

Mastodon has always worn their hearts on their sleeve, never shying from tapping into real pain for their art. You feel the anguish across the 15 track epic, with the loss of longtime manager Nick John serving as a catalyst for the overall tone.

"Pushing The Tides", "Gobblers Of Dregs", "Gigantium," and "Teardrinker" are all highlights.

No band in metal has hypnotized my every thought in quite the way Khemmis has in the past 10 years. Absolution, Hunted, and Desolation are all top-shelf, ready for vintage status releases. Deceiver is already on its way to god-tier.

Blending the doomy, down-trodden tempo the band cut its teeth on in early records with slick guitar work and hooks that would make Maiden and Priest tip the hit, Khemmis are the real deal. There's no debate now. These guys rule.

Nothing I can write will do it justice. Absorb it front to back, the way our ancestors did. Soak it in. Inject it in your veins. Fucking Khemmis!