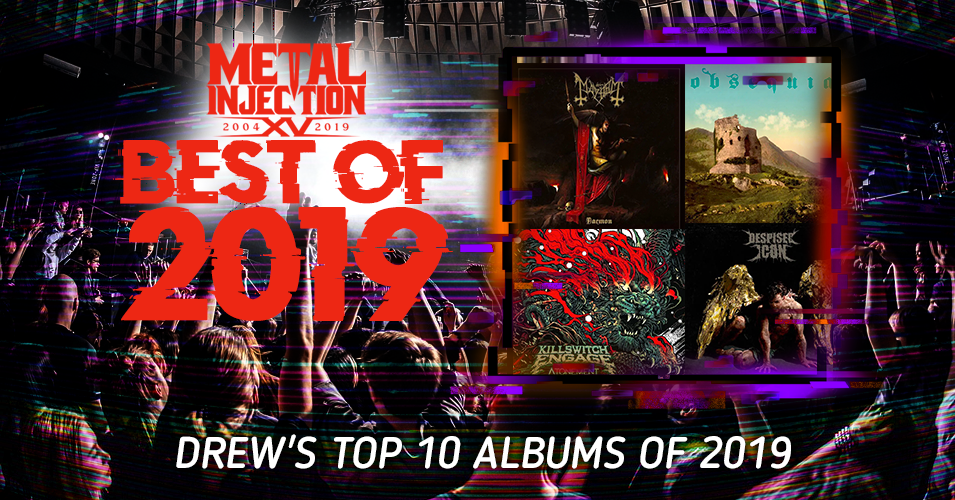 What would be a good snapshot of the year in metal? Let's say that one day in the distant future, a professor stands up before a group of students and says, "Alright, we've reached the year 2019 in our course on metal studies. What notable works came out that year?" Certainly, there would be a lot of things to talk about beyond just the releases. There's all the deaths, tours, rivalries, scandals, and a whole host of other events. But I'm not in a place to adjudicate on all of that. After all, we're not in "the distant future" as I write this, so we lack the benefit of posterity.

Or what if we maximize that posterity? What if an alien life form somehow gains awareness of our cultural landscape one day (God help them…) and focuses on the development of metal over time. What would we want to show them from 2019, if we had to pick? This is how I'd like to think of the metal releases from this year. So what I've assembled below is a partial listing of some of the best stuff from the year. There's certainly many more I could add to this list, but perhaps it's better to give everyone something easy to digest and focus on. 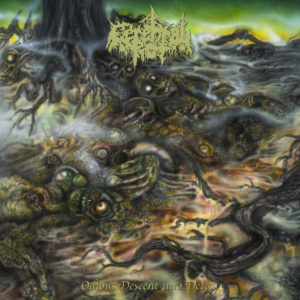 As I said in my review of the album, “If you like your death metal thick, filthy and dark (and you should), you need this album in your life.” 20 Buck Spin has punched above all competitors with its string of triumphant death metal releases this year. All of them have their virtues and reasons to rage, but this one happens to resonate with me the most. This is due to its primitive devotion to Autopsy, Incantation, Bolt Thrower and the old Finnish death metal set. 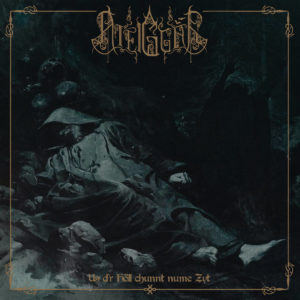 From the Helvetic Underground Committee comes a reason to dance in the storm. Yes I know “it’s just an EP,” whatever. Its 27 minutes of glorious homage to classic Emperor, Gehenna and peak-era Dimmu Borgir that really can’t fail with black metal fans. I don’t care that “it’s not really adding anything new,” I just care that it has great, memorable songs that make me want to smash the replay button. 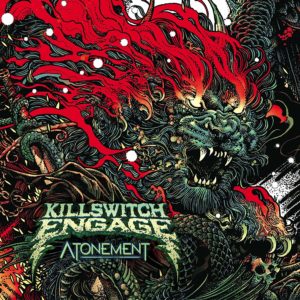 From back to front, Atonement is the best overall album of the “Jesse’s back” era of Killswitch Engage. For the band’s devotees, songs like “Unleashed,” “The Signal Fire” and “Bite the Hand That Feeds” should settle nicely into the playlist with the older classics. Jesse sounds better than ever, the guitars are top-notch, and the album contains a healthy flow of variation in song structure.

In 2019, the glory days of deathcore are long gone, but you wouldn’t be able to tell by listening to this album. Purgatory is packed with screeches, gutturals, pig squeals, breakdowns: the whole buffet of brutality. As always, drummer Alex Grind is a major star of the show, displaying a mind-scrambling ability play with precision without sounding totally robotic. 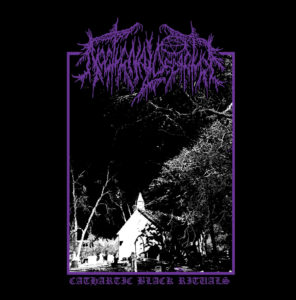 Grim, dark, evil. Nocturnal Departure plays classic second-wave black metal, laden with a strong low-end that gives it a special death metal echo to go along with the traditional coldness. The band has a great talent for exploring within the template, showing a penchant for Craft-style bleakness and a knack for the more melodic forms of riffage. If you like your black metal decked in corpse paint and don’t care about cloaking it in irony to make people like you at parties, this album is for you. 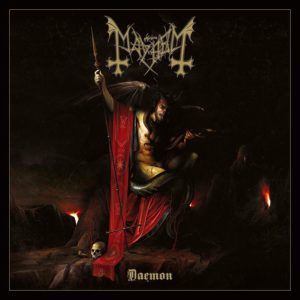 Since we’re on that topic, this is the record of 2019 that made me think, “that’s more like it.” After a middling post-De Mysteriis career, Mayhem finally gets it right. Though there are certainly tracks here that stand up well individually, it does work best as a cohesive whole. Atilla is at his best here, mixing some of his great operatic singing with his trademark weird snarl. And the riffs here are in the best shape they’ve been since 1997. I’ve read interviews of Teloch where he hints that there’s still a ton of material the band created and just didn’t use for this album. If Deamon is any indication, let’s hope we hear it soon. 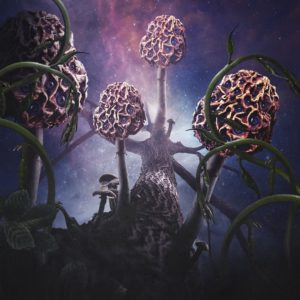 Now, this is what I think of as “finding your bliss.” Blut Aus Nord returns to their melodic alter-ego (as opposed to the more dissonant approach they use in much of their catalog) to basically make Memoria Vetusta IV in all but name. The guitars here create such a rich atmosphere that you don’t even need a visual aid to see the dazzling display of colors the band weaves with every riff, harmony, and wail. 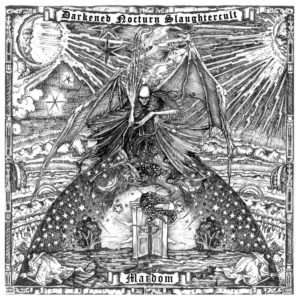 The great Saldorian beast rises again! When it comes to blasting, muscular black metal, Darkened Nocturn Slaughtercult are underrecognized giants. On this album, they take their ability to create a ripping storm of steel and mix up different tempos and melodies to create a varied listening experience. This allows to them take the eviscerating title track and contrast it with the spooky “A Beseechment Twofold” and the catchy-as-all-hell “T.O.W.D.A.T.H.A.B.T.E.” As always, the heart and black soul of the band is vocalist Onielar, who also performed on this year’s excellent album from Bethlehem. 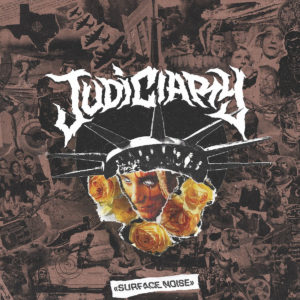 Pure hardcore satisfaction. Surface Noise comes packed with crushing breakdowns, devilish guitar licks, and absolutely perfect vocals. The band succeeds in blending modern hardcore and metal in a crossover style without making it too obvious that “this is a hardcore part” or “this is a metal part.” Rather, they blend everything into a righteous stew of bile and rage. Fittingly stern stuff for a contentious and complicated age. 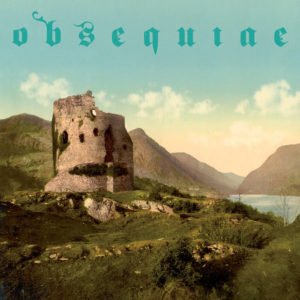 This was an easy choice. After all, it’s the only album I’ve given a perfect score in 9 years of writing about metal. I’ve spilled tons of digital ink over this album here and in Decibel already, so I’ll just reiterate what I said in my review: “It creates a mood and brings forth images of medieval legends and classical mythology, without making it overly cheesy and kitschy. For listeners looking for raw, melodic and imaginative black metal, Obsequiae's new album nothing short of a sublime sonic experience.” 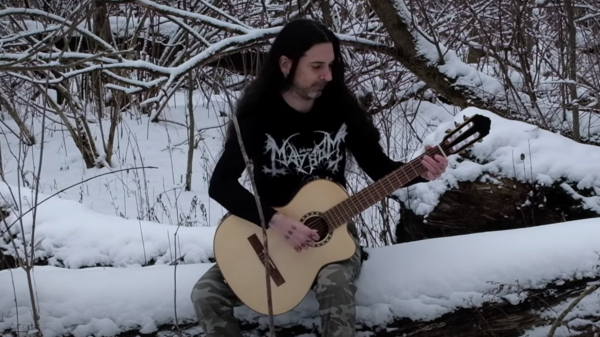 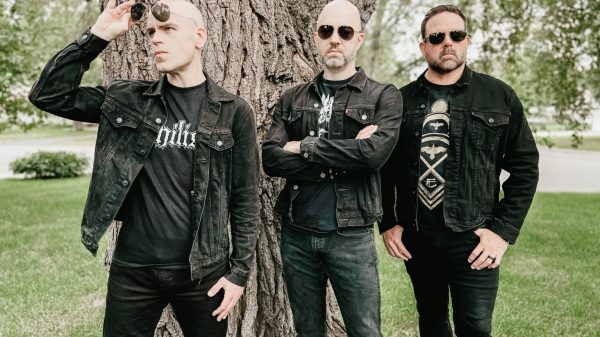