Detroit's Gift Giver describe themselves as tech/nu-metal but one quick peek at their recent output, and you immediately realize it's just deathcore:

The band have been relatively off our radar, save for their appearance on the most recent Veil of Maya tour, that is… until this weekend. Bassist Troy Wilson announced he was leaving the band, and made some pretty scathing remarks, accusing the band of cosntant bullying regarding his sexuality (Troy is gay). Here is a statement he released over the weekend:

“I’m officially out of Gift Giver guys! They are such shitty people that I left them on a side of a highway in a foreign country! The last thing Nick, their fat fuck guitarist said before I started walking was, ‘have fun getting fucked up the ass in Canada, you faggot’.

Our friends at Lambgoat reached out to him and he gave even further comment:

“I joined Gift Giver almost a year ago. They knew I was completely out and seemed completely okay with it. But as time went by, I couldn’t shake off all the fucked up shit they said about my people and it got to me. Constantly dropping faggot and making fun of feminine men. Talking about hating transgendered people. Teasing me about my sexuality. Talking shit about my boyfriend at the time.

The last straw was last night when Nick Miller, main guitarist was making fun of a store for having a gay pride flag on their store during GAY PRIDE MONTH right next to me. I called him out on it and he didn’t care how I felt. I lost it and started fighting Nick in the van. Then Justin and Nick jumped on me and started hitting me on the side of the highway. I grabbed my bags and started walking. The last thing I heard from Gift Giver was, ‘have fun getting fucked the ass in Canada you faggot’ while Justin, their vocalist, called me a ‘queer’ in the background.

“They don’t deserve anything they have gotten in the music industry. They are horrible people and truly live up to the scumbag image. They are such shitty people that I’d rather be stranded in foreign Canada than be in the van with them.”

Those seem like some serious accusations to throw at a band you just quit. As we've stated before, we think using "faggot" as an insult isn't very clever, regardless of the context. Shortly after this story went up on Lambgoat, the band decided to offer a response:

Sorry for the delay in getting you guys a statement- we have been in Canada and relying on wifi.

Last night in Edmonton, our (ex) bassist Troy Wilson got drunk and decided to headbutt our lead guitarist Nick Miller in the back of the van for no good reason. None of us have ever been physical with each other, and this was completely unacceptable. It escalated quickly and we pulled the van over to the side of the road. Everyone got out to break it up- which ended in Troy storming off. We have noticed Troy becoming increasingly unstable and aggressive lately. Mentioning wanting to fight people, etc. Probably because of his drinking and/or recent drug abuse. He has even mentioned feeling mentally unstable to us in the past.

I believe he’s just trying tarnish our reputation for kicking him out of the band due to assaulting another band mate. Our problem was ONLY with Troy and his tour etiquette. Never his sexuality or anything remotely close to that.

The dispute started over Nick describing a store near the venue- by saying “the store with the gay pride shit in the window”. Which apparently hurt Troys feelings enough to headbutt Nick in a drunken rage. When Nick said the word “shit”, it was meant in the same context as “where is my shit”?

As far as making “gay” jokes or saying the word “fag”- we have no problem with homosexuals whatsoever. Your sexual preference doesn’t involve any of us. Troy would actually call all of US “fags”, and make jokes about being gay all the time.

Some of us come from a different place/time. When I was younger it wasn’t as touchy as it is now days. But lately it seems like people tend to blow things out of proportion because they want attention.

The fact that we are being called “homophobic” is outrageous honestly. Gift Giver has never been, and never will be “homophobic”. In fact, if we were homophobes- we never would have had a homosexual join into our band. Plain and simple. When we first met Troy last summer, we even attended a pride festival in Denver, CO together.

In conclusion, we want to thank anyone who continues to support us as a band, and is wise enough to not believe everything on the Internet.

If you guys still want to believe we are homophobes, wait until we drop our next video!

The defensive response featured some questionable content,specificially the part about "where is my shit." How is that even relevant? Also, what exactly does "Some of us come from a different place/time. When I was younger it wasn’t as touchy as it is now days." Is he implying that that their former bassist was teased and it was all just "innocent" and Troy was being sensitive?

Either way, it was hard to pick a side on the matter. Rather than letting things die down, Gift Giver wanted to really prove they weren't homophobes by posting this touching photo:

In this article: gift giver 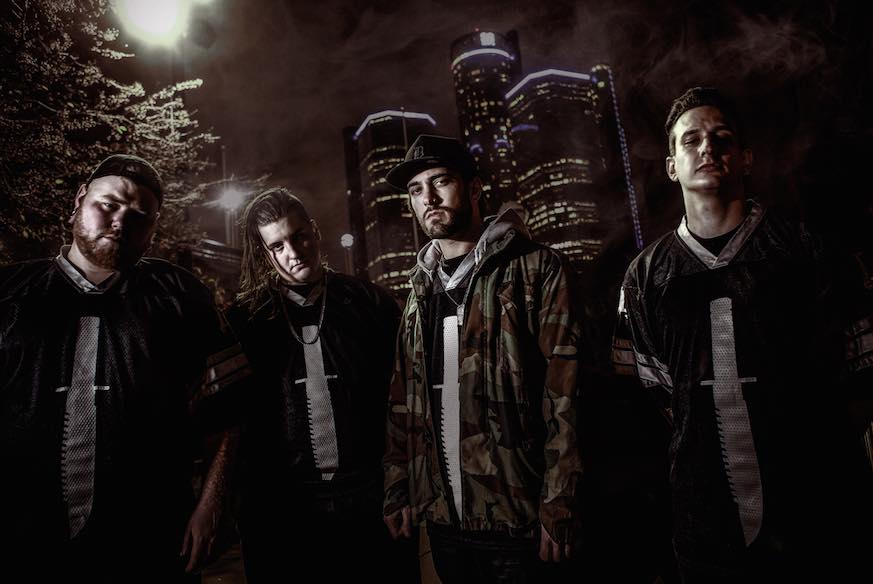 This one's going to be a ripper!