Remember, last summer when there was a little blip about Killswtich Engage's Adam D. forming a supergroup with Cannibal Corpse vocalist, George "Corpsegrinder" Fisher and Black Dahlia Murder drummmer Shannon Lucas. It wasn't officially confirmed, it just seemed like something a few friends were working on. Well, we can tell you, in full confidence, it's DEFINITELY happening.

We spoke with Corpsegrinder last week during our coverage of the 70,000 Tons of Metal, and even though the cameras stopped rolling, Corpsegrinder was still in a chatting mood. I just so happened to be wearing a Black Dahlia Murder shirt, and Corpsegrinder noticed it and confirmed to us that he is DEFINITELY working on a project with the Black Dahlia drummer, and Adam D. and it's sounding killer.

He let us know that Adam D already has eight songs written. There are parts that definitely sound like Killswitch and then there are some very down-tuned riffs. When I asked what sort of vocals we could expect, Corpsegrinder pointed to his other side-project, Paths of Possession where he growls highs and lows.

This is really exciting. As for a timetable, there doesn't seem to be much of one, but Fisher said the album will most likely come out on Metal Blade records, whenever it does end up happening.

Who else is super-excited? 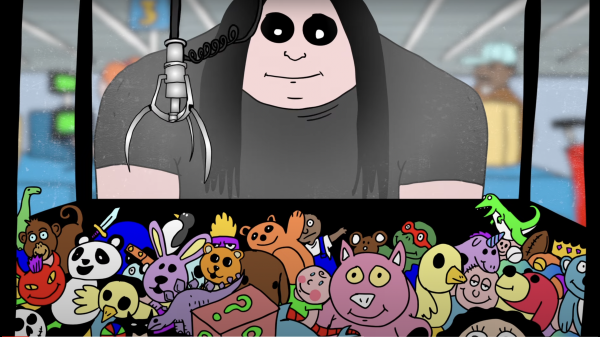 He fights zombie hordes... to give a bear to a child.