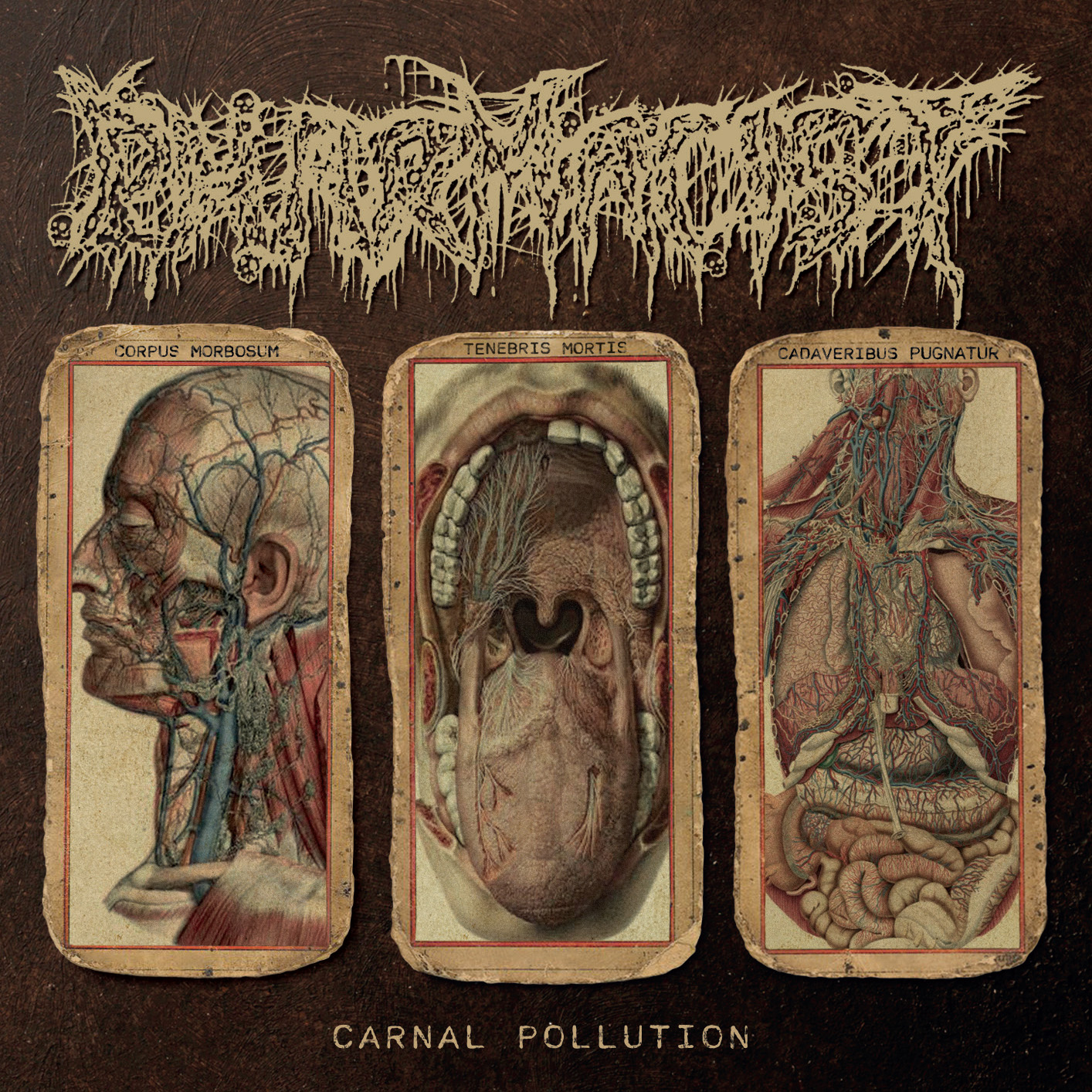 It’s Monday and Mondays suck, so let’s grind it out with an interview and premiere of Pharmacist’s new EP Carnal Pollution.

While the weather may start cooling down, the releases for the rest of the year are only going to get hotter. Today’s premiere is a very exciting one because it is the mighty Japanese two-piece death metal/goregrinders Pharmacist. If you love Symphonies of Sickness era Carcass and old school death metal/grind, and you have not heard of this band, here is your new favorite band.

The project is only a year old, but their output has been insane. Just a few days ago they released a split with Fluids. However, others include splits with Oozing, Golem of Gore, Expurgo, Charcuterie, and Egggore. On top of that, they released an incredibly disgusting debut last year called Medical Renditions of Grinding Decomposition. Amongst this there are singles as well so if you are looking for a meaty discography, welcome.

Carnal Pollution is the latest entry into Pharmacist’s disco-grindy. The EP is four tracks that also feature Andrew Lee (Ripped To Shreds, Houkago Grind Time) contributing solos. This EP is soaked in a pure love for the old school. As “Disintegration” rips on the 80s love of death and grind is evident in tone alone. The music sounds sick and rough. The track is fast, with plenty of catchy riffs and an amazing solo from Lee. Hell, the devotion to the sound alone is a labor of love. On the whole of this EP not once does anything sound forced or generic. There is something about Pharmacist that just has a more natural feel; something organic in its nature. And I think as to why that is, is answered in the interview below:

How did Pharmacist come about as a band/concept?

The idea for the name came around a few years ago, and I already had a logo but was not sure which direction I should move the project. In 2020, I decided to start actually working on it with only one condition – no boundaries or specific limits; the idea was to make something that will come out naturally by my personal inspirations, and, as a result, it was the easiest way to proceed with lots of fun.

What’s the inspiration behind Pharmacist?

Letting songs write themselves naturally without forcing any specific result, relying only on what I used to keep me hooked on the genre, such sort of artistic freedom still works great. Besides the gore-themed-oriented approach, old-school thrash and death metal are big inspirations. Not only the bands like Carcass, Pathologist or General Surgery but also early Kreator, Death, Possessed, etc.

How do you approach writing music for the project? And are there any concepts or messages you are trying to portray?

I have a stock of riffs which I record on occasion, also some ideas with blocks of riffs. Then when the timing is good and I start writing, I come up with more riffs and also try to start songs from scratch, filling voids and bridges with already existing old pieces. Usually, the storytelling of the song goes on by itself, helping to place the right piece in the right place.

Also, even though most of the songs are longer than 4 minutes, I still want the structure to be visible, including intros, choruses, and so on. It would be nice to extend such an approach to the next level, and in the future, maybe it will happen.

There are no specific messages or ideas behind the current material. But it's always cool to play with listeners by adding obvious references to the bands who inspire the project. Such as the ending of "Intestinal Ventilation," which refers to the ending of Carcass' "Forensic Clinicism / The Sanguine Article", or the intro of "Eulogy Of Pathological Surgery," which hints to Chuck [Schuldiner]'s works. It's like a small communication with listeners, and it's so nice to see comments of people who caught the "easter eggs."

What’s the challenge of writing songs as a two-person band?

Probably it's simply the workload and tasks that coming up during the process. I enjoy the whole process as far as it is related to music creation, but to make everything combined, and up and running, it's time-consuming and requires some space to focus and concentrate.

This EP features Andrew Lee from Ripped to Shreds. What was it like writing with him? What were the challenges or goals?

Andrew made an amazing input, and honestly, I would really love to work with him again. When I had material for the EP and our split with Fluids ready, I sent him the tracks, and whatever he sent back was pure gold.

It fits so naturally, it felt as if he was the one who wrote the entire material and knew exactly what and where things should be placed! The communication itself finished with only a few messages, and then it was only a matter of time to record. He made a total of four tracks, two of them appeared on the just-released split with Fluids, Feeling Young.

The other two tracks are on the EP, and I am excited for people to hear them too!

How do you see the future of Pharmacist as a project? Do you have any long-term goals?

Just making more music, trying to keep up! Cutting back on smaller releases due to free time issues, but who knows! Keep an eye out for the updates!

Thank you to Pharmacist for the words and for the incredible output so far. Old school death metal fans, goregrinders, regular grinders, deathgrinders, come one, come all. Pharmacist in and it is time to take your meds. Get grinding on this one!

In this article: carnal pollution, pharmacist