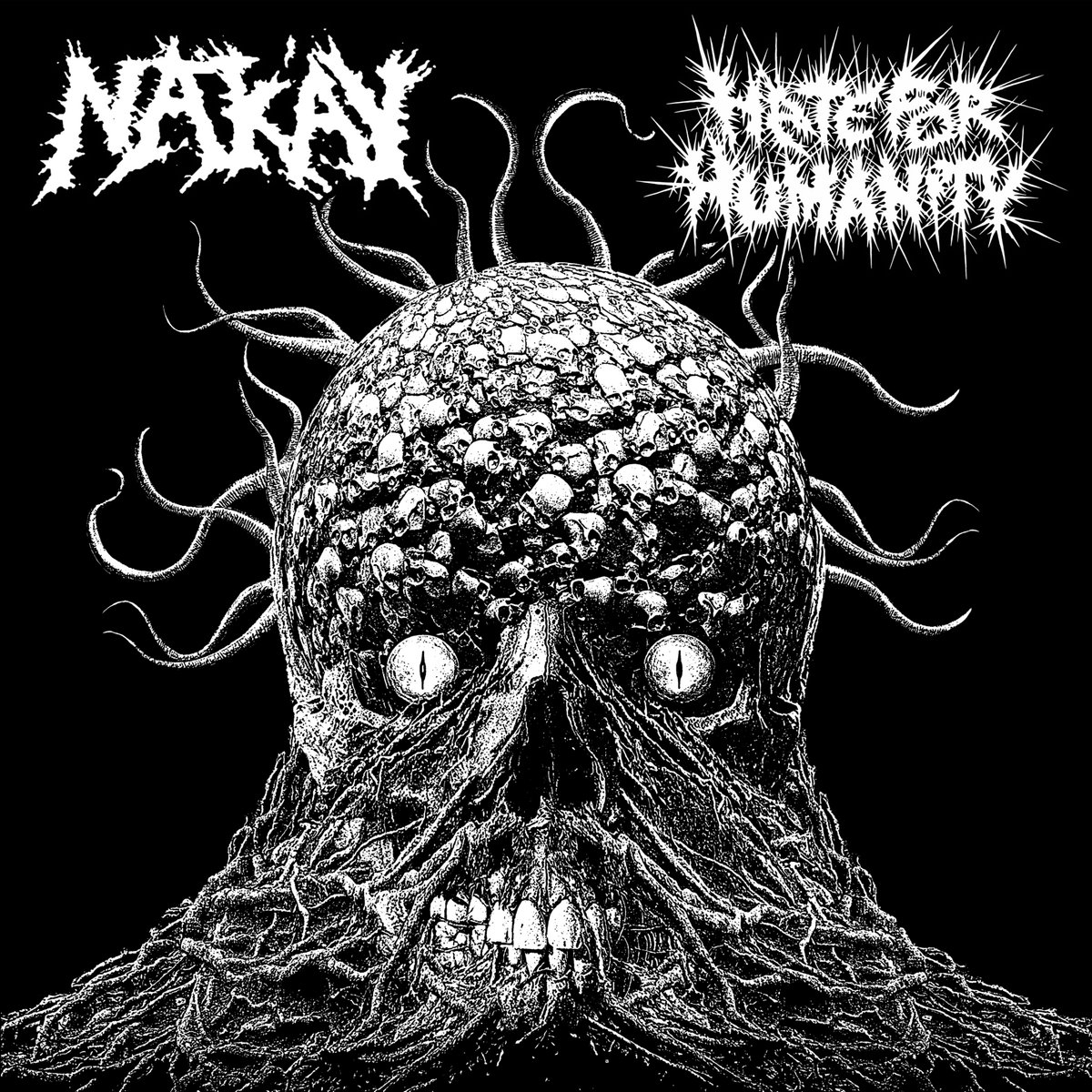 It’s Monday and Mondays suck so let’s grind it out with a split from Nak’ay and Hate For Humanity.

First up is Nak’ay, a band that has been on the grind since 2008, hailing out of Fort Wayne, IN. Largely known for their splits with legends like Suffering Mind, Archagathus, Lycanthropy, Deterioration, and so many more. The members have also been in/are in projects like Flux Capacitor, Desekryptor, Vomikult, Drainage, and also many more. These are some busy guys. What do they bring to the table? Some of the hardest grindcore/death metal out there.

Hate For Humanity, is a newer project beginning in 2019 and hailing out of Los Angeles, CA. This split is only their second release besides a demo but they bring the heat. One of the two bandmates (Jeff Sandidge) is also in a Nerve Grind, another incredible grind project that has done a bunch of incredible splits. And what do they bring? The grind-necessities: blasts, heaviness, and total chaos.

Nak'ay get things rolling with their side and the opener "Death Transcendence." It begins slowly, more like a death metal track as it moves shifts between the two genres with some ultra-heavy sections and some mean, mean blast beats. The second track, "Assigned Tomb," follows in a similar fashion as it starts but grinds things down even more. It is like the band is building steam. "Drone Divinity" is the explosion track. If buildings were being bombed before this, this song is the equivalent of a city being razed. The bangers just keep rolling in from here. And what Nak'ay is so good at is constantly on display: they just know how to throw together an interesting song that isn't just blasts. But at the same time, there are a lot of blasts.

Hate For Humanity is the straight grind side, opening with a clip from Full Metal Jacket on "Hard Decline" and then getting straight to the grind. Hate For Humanity's side is incredibly dense and heavy. So much so that if they added some fuzz to their sound, they would pull off some groovy goregrind. But I digress. Every track comes in at under a minute but goes absolutely bonkers start to finish. If the band is not blasting, they are building up to a blast. Something fun about this offering is two different collections of tracks. The first 11 songs are very thick, but once "Wreckage" hits things get a lot louder and tinny. And it is punk as hell.

Two bands and a shit load of blasts. Both Nak'ay and Hate For Humanity came out with chainsaws for this. Though we are basically a month in to 2022 at this point, and while we plummet further and further into complete collapse, we are off to a strong start in the grindcore department. A phrase I often see on Metal Twitter bears repeating here: this shit fucks. Get grinding on this!

In this article: hate for humanity, nak'ay