Funeral Doom Friday: Getting Dragged Through the "Undercurrents" of ARCHE

Funeral Doom Friday: New Music From MAJESTIC DOWNFALL, APHONIC THRENODY, and GRAVKVADE
The debut EP from Finland's ARCHE may only be two songs, but it carries the same crushing weight of a full-length album.

Finland is home to a couple of Funeral Doom Metal's most influential pioneers. Thergothon and Skepticism rose to prominence in the early 1990's, creating demos to serve as the bedrock for the genre in Scandinavia. Thergothon's momentum floundered following the release of the their demo, releasing only one full-length album during their active years. Skepticism meanwhile has seen sustained success for the past twenty years or so and most recently released a magnificent album in 2015, entitled Ordeal.  The Finnish legends' newest album grabbed most of the acclaim following its release in September, but sitting in the shadows of Skepticism's monolith was another Finnish group quietly constructing their own monstrous music.

Arche is a three-piece that resides in Tampere, Finland (roughly 115 km from Riihimäki where Skepticism resides). They formed in the summer of 2014 as "a vessel for the ever-emerging elegies" and almost a year later digitally released their debut EP, Undercurrents, on their own before Graceless Recordings gave it a cassette release in September. The two song recording totals just over thirty minutes and deploys grandiose arrangements that sound like they should be made by bands who have been around for decades. "Plains of Lethe", the extended player's first song is a hymn to the mythological river of Lethe (named after the goddess of Oblivion), where the dead drank from before being reincarnated. Drinking from the river Lethe caused those who consumed its water to forget their past lives. The second track, "Funereal Folds", holds a soaring rhythm section that immerses the listener in a sorrowful lament made of dark and heavy riffs. It is on this track where Eppe Kuismin (guitars/ vocals), Panu Raatikainen (guitars/bass), and Vidar Raittila (drums) exhibit their versatility, switching between distorted tones and clean guitars as well as expertly enacted drum patterns.

The Finnish trio composed a pleasantly surprising, heavy and well-rounded debut in Undercurrents. The emotive force and wave of doom that comes from this EP was something brilliant and bodes very well for the group's future. If Arche can maintain this level consistency with their future projects, then it is possible that Scandinavia's Funeral Doom may have their next great band. Let us hope they trend in the direction of Skepticism and stick around for many years and not fall off like funereal founders, Thergothon. Watch the official music video for "Plains of Lethe" below, purchase their music on their Bandcamp page, and check them out on Facebook.

In this article: Arche 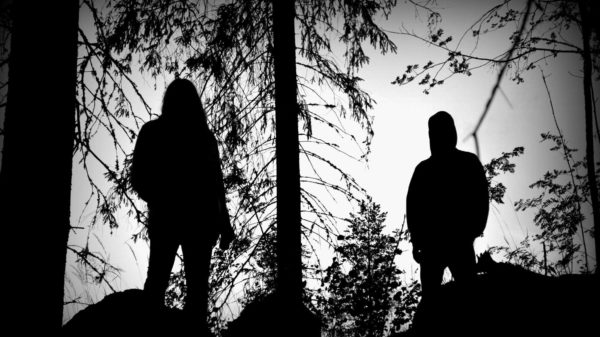