Funeral Doom Friday: New Music From RISE TO THE SKY, FRAGMENTS OF LOST MEMORIES, And EIRD 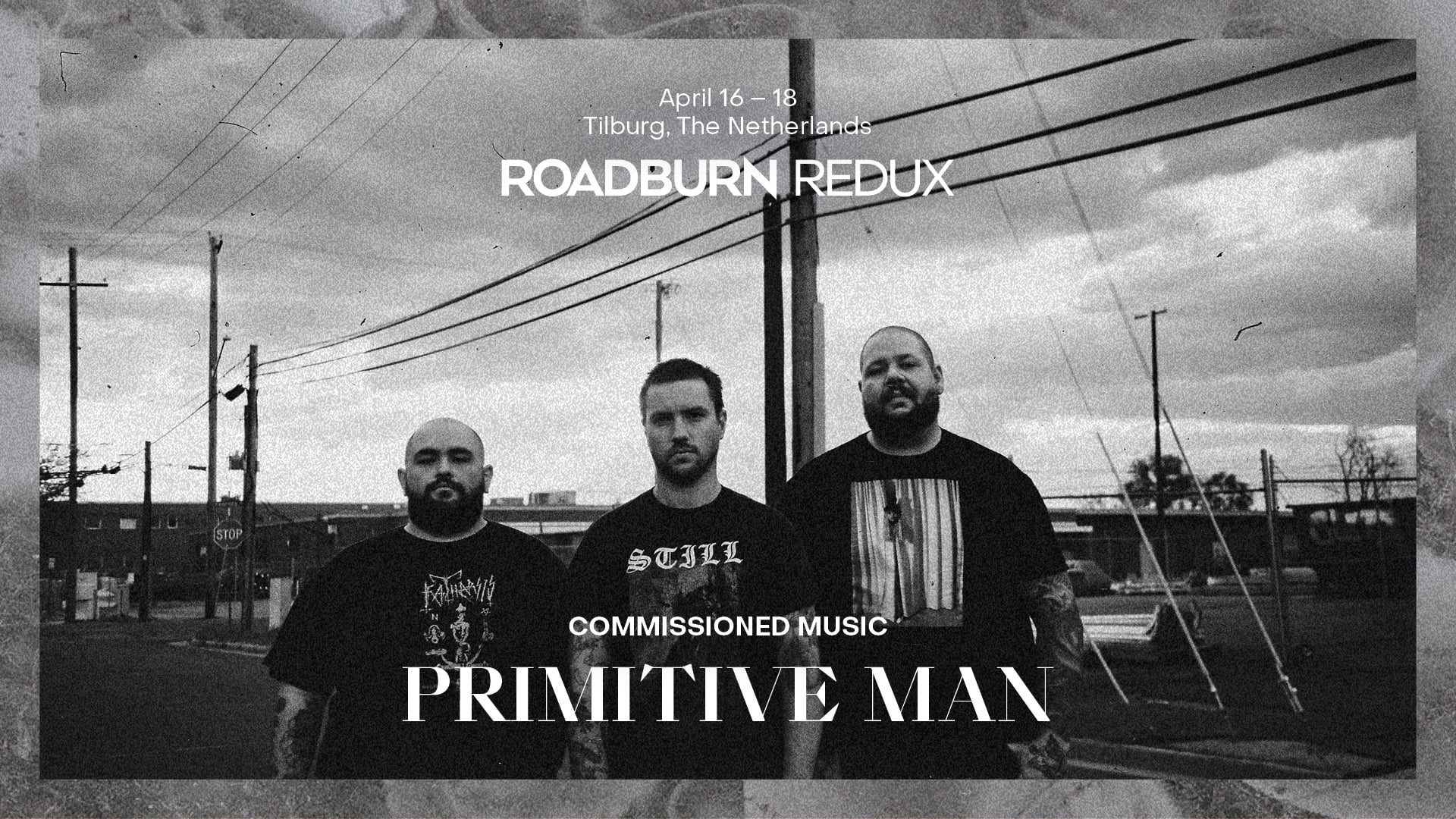 Abysmal affections to you and yours! This edition of Funeral Doom Friday is particularly special. The 2021 Roadburn Festival is livestreaming all its performances this year! The festival begins at 19:00 CEST today. Visit Roadburn Redux for more information on the many commissioned sets and exclusive performances taking place this year.

Though there is no fee to stream the performances, I personally encourage readers to make donations. Regardless of the amount, we all love the music and artistry behind these live performances. Not to mention all the booking agents and road crews who worked to bring Roadburn online this year.

Primitive Man and Many Blessings will both perform commissioned sets at Roadburn Redux. Ethan McCarthy, mastermind of both projects, was kind enough to offer his time to an interview about these performances.

In the spirit of the art that Roadburn offers, I’ve written a personal reflection on Primitive Man’s music. Furthermore, I’ve delved deeper into the significance the band’s music has for me. If that seems interesting to you, please continue reading. If not, feel free to stop reading after the interview with Ethan McCarthy. And enjoy Roadburn Redux!

For a complete schedule, visit the Roadburn Redux Timetable.

Interview With Ethan McCarthy of Primitive Man And Many Blessings

Both Primitive Man’s Immersion Many Blessings’ Emanation Body came, almost prophetically, at a time when we all needed them. In particular, Immersion delivered a captivating awareness of what the world was, and marvelled at the terror that was yet to come.

“We were asked to do a livestream originally but when all of this coronavirus stuff started, we decided pretty early on that we wouldn't be doing any livestream shows,” McCarthy said. “ And this isn't a knock on anyone that does those.  But to us, what we do does not come across correctly when it is not experienced in the traditional way.  So, the compromise was a piece of commissioned work which we were much more interested in.  Not to mention it's an honor to be asked to do this by Roadburn.”

McCarthy noted that neither Primitive Man nor Many Blessings will shy away from improvisation. “The Many Blessings material always has a certain amount of improv behind it but with a set goal I am sonically trying to accomplish,” he said. “Primitive Man can either be calculated when writing our ‘metal band’ songs and then will lean into moments of improvisation when recording noise/drone & ambient material.  We have a few things in the vault right now that are along those lines that we have yet to figure out when/where they're going to be released.”

Both Primitive Man and Many Blessings will utilize video footage to further complete the experience of their sets. “There will be visuals for both projects,” said McCarthy. “We will be collaborating with our friend Neil Barrett again for the Primitive Man video and I am still working out the details for the Many Blessings visuals but most of the images will be sourced from the last year of videos I took.”

When asked how fans could best support the performances, McCarthy said, ”they can support us by giving it a quick listen, sharing them, & by eventually finding the time to fully absorb and enjoy them.”

That we can conceive of the phenomenon of suffering, our own as well as that of other organisms, is a property unique to us as a dangerously conscious species. We know there is suffering, and we do take action against it by “artificially limiting the content of consciousness.” Between taking action against and downplaying suffering, mainly the latter, most of us do not worry that it has overly sullied our existence.

– Thomas Ligotti, The Conspiracy Against the Human Race

How will I cherish now when life only comes with a lease? Living in a dying world/Peace is a dream long dead/No man is a brother of mine

“Loathe,” the opening track on the Home Is Where The Hatred Is EP, introduced me to Primitive Man. I’d previously come across their name, but hadn’t been truly attentive to their sound. An exacting squall of feedback burst into my ears. A bass began to rumble. Drums started to resound and build. The guitar feedback squelched into a discordant, eerie riff. And then the vocals kicked in. Right around the 1:40 mark. “Some things you take to the grave,” howled the vocalist, “like a hatred transcending.” I didn’t know the lyrics the first time I heard “Loathe.” And I didn’t look them up until after listening to it several more times.

“Loathe,” is not a good song. At least, not good in the way that popular musical wisdom suggests. It’s brutish and revolting. Perhaps even outright cruel. Some might object to referring to it (or any of Primitive Man’s material for that matter) as a “song” at all. But that didn’t matter. Not to me. Because in that moment, I felt “Loathe” in my bones. In my gut. Or, if you’ll permit, in my soul.

In The Word As Will And Representation, Arthur Schopenhauer described music as a “universal language.” In the same work, he paraphrased Gottfried Leibniz’s idea that music was a process the soul engaged in without even realizing it. Listening to “Loathe” felt like someone siphoned out my own emotions and contained them. Through a creative process, the thing that emerged was the sound of “Loathe.” And that was before I even read the lyrics.

After that, I consumed all of Primitive Man’s catalogue. Both “Unable” (from the split with Hessian) and “Empty Husk” (from the split with NORTHLESS) remain among my personal favorites. Primitive Man don’t make music that’s easily digestible. Yet, I could not get enough of it. I could not stop listening to it. The music seemed written specifically for me. I was employed in an occupation that didn’t align with my interests or personality. I’d gone back to school to finish a Bachelor’s degree to try and vacate said occupation. I spun many different plates to try and improve my life.

The burnout from my job fueled anxiety and depression. I began to experience suicidal ideation. And I continued on in this state for over two years. Meaning vanished. I did not care about my well-being at all. I drank excessively. But I was a new Dad. My wife needed me. And so did my son. Every day, my goal was simply to make it home. And to continue to breathe. So many times, I wanted to quit. Quit the job, and quit life. But I was terrified of not being able to provide. To pay bills, rent, etc. Somehow, I became convinced that unemployment would be even worse. That I’d just exchange one set of stressors for another.

Primitive Man was my soundtrack for much of this period. Every single note of feedback became a syllable in the language of my own anguish. As a teenager, I relished in the loudest, angriest, fastest music I could find. But Primitive Man is what you need when your grief grows up. When you’ve really taken some time to grapple with the perils that come with existing as a conscious being. When the narrative you’ve been sold – go to school, go to college, get a job, work, pay bills, die – dissolves around you. That’s what Primitive Man is for.

In reading about Primitive Man, you’ll often see the word “nihilistic” used to describe their sound. I intend no offense against anyone who uses that word, and it definitely has merit. Themes of meaninglessness, apathy, and existential angst abound in Primitive Man’s music. But the music itself, its creation, and the artists behind it? They offer tremendous meaning.

Sometimes we listen to metal because it makes us feel good. We want to socialize, enjoy some revelry, and perhaps partake of our favorite herbal supplements from the local apothecary. Some metal is for partying. Other metal is for lusty liaisons and promiscuity. But Primitive Man is for those moments when you’re along with the aether. In solitude with the void. When the cosmic cold shoulder won’t respond to your pleas for help.

Sometimes life smugly smiles at you from behind rotten teeth. Its breath, like sulfurous offal, stings your nostrils. It glares down at you, asking,” where’s your meaning now?” Those are the moments where you find whatever scraps of meaning may be left. That’s why Primitive Man’s music is full of meaning.

Immersion even made it to the Billboard Charts (Note: The Billboard Charts are behind a paywall, so I was unable to find the exact chart position). To me, that indicates that they’re offering something that a lot of people want to hear.