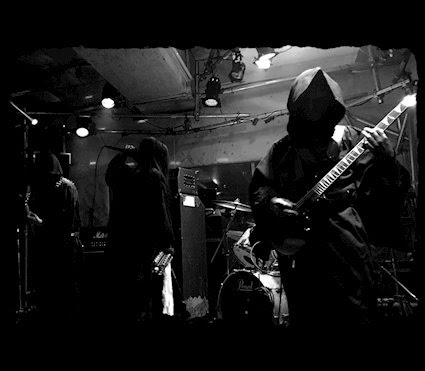 "The boundaries which divide Life from Death are at best shadowy and vague. Who shall say where the one ends, and where the other begins?" – Edgar Allan Poe, The Premature Burial

Rot in hell, 2020. Would anyone disagree? If ever there was a year that deserved a merciful end to its misery, surely it ought to be this year? Since about the middle of February, we’ve been gathered around the cemetery waiting for the pallbearers to arrive. Upon their shoulders, the burdensome casket containing the decomposing husk of 2020. Or perhaps we could run it through the crematorium? Maybe twice (or thrice) just to make sure the job gets done right! Regardless of how we say goodbye, 2020 is late for its own funeral.

Welcome, friends! Welcome to the reanimated corpse of Funeral Doom Friday. Following the chaos and tumult of this horrendous year, Funeral Doom Friday returns on the eve of Halloween. As we all weep and wail over the passing of the year, let us join one another to reflect on 2020's most morose metal. To christen our maiden voyage, let us consider the debut album Izanaena by Begräbnis.

In English, the German word "begräbnis" means "funeral." How apropos, yes? Crawling forth from the same soil which bore Corrupted and Funeral Moth, Begräbnis call Japan home. Most specifically Sendai, Miyagi Prefecture. Following independent demos in 2012 and 2013, subsequent years saw Begräbnis sharing splits with Estrangement, Sol, Harrfluss, and 厄鬼 (evil spirit). In 2020, after over a decade together, Begräbnis exhume an album of exquisite funerary delight.

Opener "因果てど愚弄す (Inverted Cross)" beckons to the listener with a monstrous, gurgling drone. Concussive drones like these punctuate the entire thread of the album. As Begräbnis have no drummer, this witchy pulsing serves as their percussion. Izanaena’s production is raw and coarse. It offers the listener a tangible sense of claustrophobic dread, as though one were hearing it from beneath six feet of dirt.

Like a mad beldam, vocalist Fumika Souzawa retches and heaves forth intonations from the depths of the viscera. Guitarists Kyosuke Tanaka and Takashi Harima thread together leads of despondent beauty. These provide a wisp of melody above Izanaena’s ever-churning gloom. If we find out later that the album was recorded live from the mausoleum, I won’t be at all surprised.

Medieval art frequently depicted Hell not as a place, but as an abyssal mouth that devoured the damned.  Rather than a mere album, Izanaena is something that comes to devour the listener. Beware, listener. Begräbnis will swallow your soul.

Izanaena is out now on Weird Truth Productions.