There's a blossoming wave of brilliant black metal coming from the Netherlands over the last decade or so, particularly within the last five years. A lot of it is due in part to the emergence of Haeresis Noviomagi, an entity part-record label and part-cabal of collaborative musicians. The project began in 2o15 as a way to release music from a handful of projects like Turia, Lubbert Das, Iskandr, and Solar Temple. In the few short years of the label's existence, the number of projects grew as the members—who simply go by singular letters—continued to collaborate. The resultant product is consistently some of the most intellectual and intriguing black metal to recently come from Europe. Nowhere is that more apparent than in their newest project, Nusquama—a radiant microcosm of the sect's vision and execution.

Nusquama not only pulls from Haeresis Noviomagi members but from other scintillating Dutch acts like Laster and Northward (RIP). For the last two years, this quintet hive mind has been working on an album. It finally emerges this month in the brilliant Horizon Ontheemt. As further background, the band's name stems from a term used by Thomas More, an English philosopher, that refers to a "necessity and impossibility of a hopeful alternative." This idea pairs well with the album's source material, the literary works of Dutch poet, Elisabeth Maria Post. Her works include novels entitled Reinhart and Het Land as well as a collection of poems named Gezangen der Liefde. Post's writings historically covered the topic of sentimentalism, or how one knows moral truths. 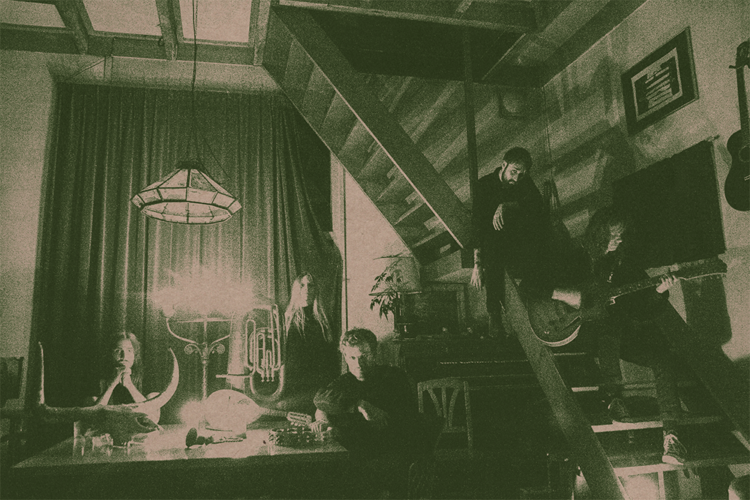 It's certainly not a carefree or easy conversational piece, but across eight tracks, Nusquama take this idea and weave it into their musical craft. At times patient and restrained and at others, furious and bombastic, Horizon Ontheemt is a clinic on building and releasing tension. There are moments, like lead single "Vurrslag," that use self-contained sections to build rising intensity—dual guitars and cymbal work swell into these mesmerizing circular patterns—until the closing moments of the song drop out.

The opening to "Wrevel" is, in contrast, an onslaught. Every member of the band flexes their speed (and fangs), driving the opening two minutes of the track before it settles into a mid-tempo roll and isolated guitar chords. The band uses this dichotomy throughout the album, much like moral truths tackle the rift between subjective and objective truth or moral relativism and moral absolutism. There's a reflection of their subject matter in their compositions and it truly speaks not to just their skill but their intellect.

Chalk some of it up to the exposure and success of Haeresis Noviomagi lately and their proximity to Tilburg; Nusquama's music hasn't even come out yet and they've landed a spot at this year's Roadburn Festival. Its members will also be performing as other bands and unique projects. Turia is slated for performance. Meanwhile, members of Iskandr, Solar Temple, Fluisteraars are commissioned under the moniker of Maalstroom. Of course, given how wonderful their debut album is as well as the excellence in the other listed projects, its no wonder they're such a focal point of the festival this year.

Horizon Ontheemt arrives next week through Eisenwald (vinyl and CD) and Haeresis Noviomagi (tape). Listen to an exclusive, advanced stream of the wonderful debut album below.