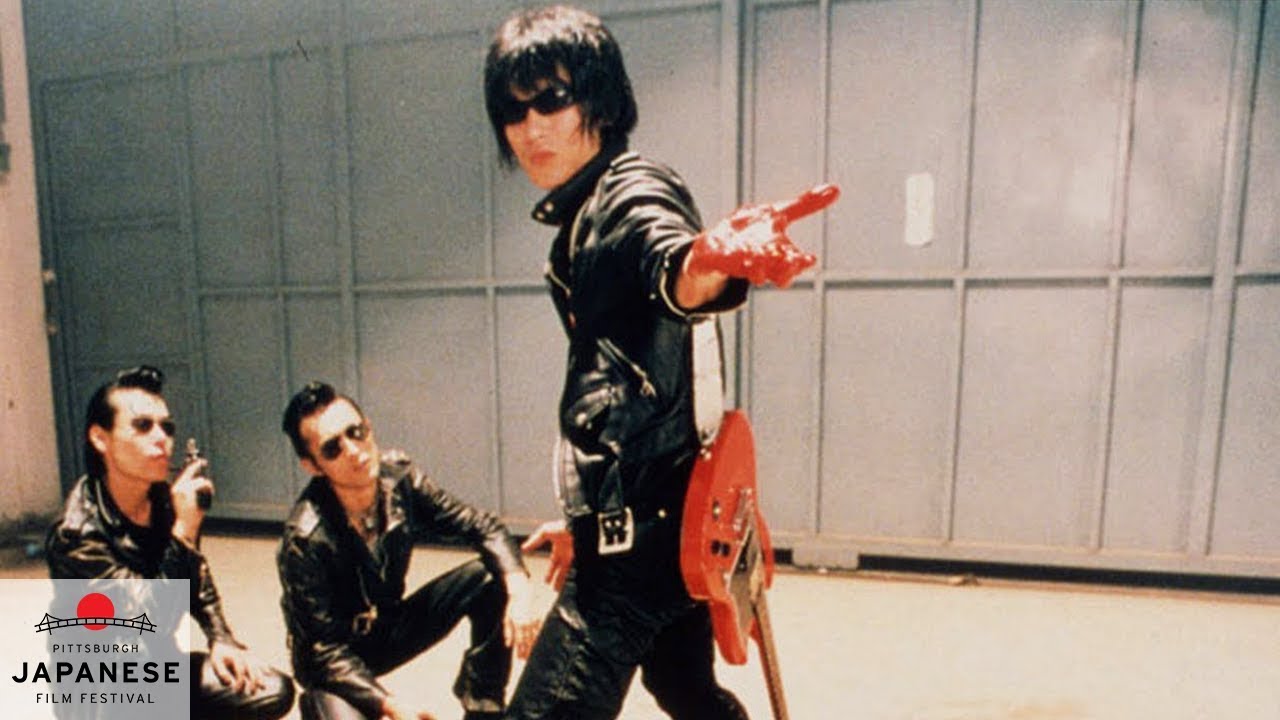 It's kind of impossible to tell someone what Wild Zero (1999), one of the greatest rock and roll zombie films of all time, is about. As a fan of the film, it's hard not to blurt out its many merits all at once. Aliens are about to invade Earth, zombies go on a flesh-eating rampage, all while the members of Japanese band Guitar Wolf look cool as fuck combing their hair, roaring around on guitarist Senji's fire-breathing motorcycle and their 1973 red Toyota Celica while trying to save the world dressed in black leather and sunglasses.

The minute Wild Zero starts, it is loud, or as guitarist Senji would say "noisy." After establishing Earth is about to be subjected to a massive alien invasion, we cut to a scene of Guitar Wolf playing a crazy set at a club. Some nefarious shit goes down outside the club in the way of a nasty looking assault and battery. Guitar Wolf's guitarist Guitar Wolf (Seiji), and bassist, Bass Wolf (Billy/Hideaki Sekiguchi, RIP), and Drum Wolf (Toru) engage in an electrical shock battle with their instruments, and all over the club people are passing around little white pills.

All of this occurs in less than five minutes from the film's opening credits. And Wild Zero keeps swerving ahead, leaving a wake of death, B-movie inspired mayhem and rock and roll in its wake. 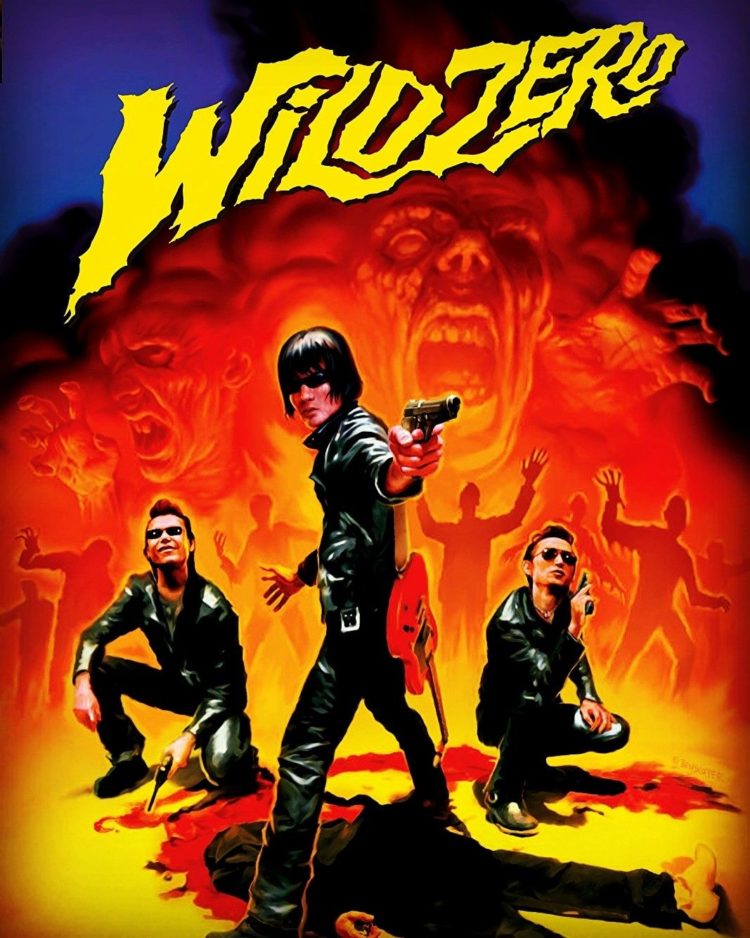 Wild Zero is best described as a triumphant mixture of Japanese rock and roll culture, bloodshed and guitars, featuring the great Guitar Wolf, one of Japan's most enduring musical exports. If you've never seen the band, formed in 1987 in Tokyo, don't worry — Guitar Wolf (who some refer to as the Japanese version of the Ramones, and the film a Japanese version of Rock and Roll High School), are still active and just finished up a tour with Nashville Pussy this past Spring/Summer. If you missed them, Guitar Wolf's performance in Wild Zero isn't too far off from their live gigs, and if that's not the truth, may I be struck down by a bolt of lightning coming straight from Seiji's SG. Just to reinforce the fact that the Guitar Wolf you see in Wild Zero is what you get in real life, director Tetsuro Takeuchi's intention for the film was simply to film the band's day-to-day life. Except Takeuchi's vision of Guitar Wolf's daily routines included battling zombies and trying to save the world.

As far as the storyline goes, it revolves around Guitar Wolf and Ace (Masashi Endo), one of the band's biggest fans and a dedicated rock and roll junkie. After getting up the nerve to talk to his heroes backstage, he interrupts a gun standoff between Seji and the club's sleazeball owner Captain, played to the hilt in hot pants by Makoto Inamiya. Very much in B-movie style, brains and body parts are suddenly everywhere, so Ace and Guitar Wolf split the scene, guns blazing. Before they split, Seji makes Ace his blood brother by carving X's into both of their hands, then gives him a whistle for him to blow "anytime he's in danger." As this movie really does have everything, Ace supplies some of the film's comic relief and even falls in love with a cute little chick named Tobio. But there's really no time for romance for Ace and Tobio (well, maybe a little, though it won't be what you were expecting) because the campy practical effect flesh-eating zombies are starting to show up all over the place. Just like the mystical Seji does throughout the film. And, as many times as I've seen this film, I always want to cheer out loud when he materializes. You know, just like every time you get to see Eli Roth murdering Hitler as Sgt. Donny Donowitz in Inglorious Basterds. However, director Tetsuro Takeuchi seems to be more inspired by the work of David Lynch, George Romero, and Lloyd Kauffman, and in the process, like all three directors, made a cult film he visualized and wrote (with help from screenwriter Satoshi Takagi).

Right as things are looking pretty desperate for Ace, he blows the whistle given to him by Seji, and what's left of his mind snaps. Did I mention there's also this chick driving a tricked out military vehicle who knows how to throw a punch and kick some zombie ass in the nude? No. Well, that's happening too. Captain is still out looking to get revenge on Seji and the rest of Guitar Wolf for blowing his fingers off. As night falls, Guitar Wolf and a couple of lovebirds they saved (trying to escape the zombies) stop at the gas station to regroup, including another comedic character, Toshi, played by actor Yoshiyuki Morishita, known in popular culture as the Steve Buschemi of Japan. Excellent.

The zombie-fighting girl in the tank-like truck rolls up just as a horde of zombies arrive. Since she's a badass, she tries to shoot her way out of the situation (in a bodysuit and heels no less), but, as guns do, her weapon runs out of bullets. This is when one of the greatest scenes in Wild Zero goes down; Seji screams his signature phrase "ROCK AND ROLL!" and pulls out his gun to help out with the zombie body count. Except he's also down to just one bullet. But since this is Seji, the goddamn Guitar Wolf himself, he pulls a pile of weaponized guitar picks out of his pocket and proceeds to annihilate the zombies by flicking the picks at them one by one. WEAPONIZED GUITAR PICKS. As luck would have it, their new female friend is some sort of arms dealer with a large cache of weapons in a nearby warehouse. All gunned up, Guitar Wolf leaves the warehouse to continue their search for Ace. When they finally find him, he's still in full-rage mode, smashing zombie skulls with a lead pipe while "Rebel Girl" by Bikini Kill plays in the background. Poor Ace looks doomed until his guardian angels, Guitar Wolf and Seji, finally rescue him.

As this post is already full of spoilers giving you more than enough reason to seek this film out immediately, I'm going to leave you to trust that the last 25 minutes of Wild Zero only gets more insane by the time the alien ships show up. Check out the bonkers trailer for your new favorite rock and roll zombie movie, Wild Zero, below.