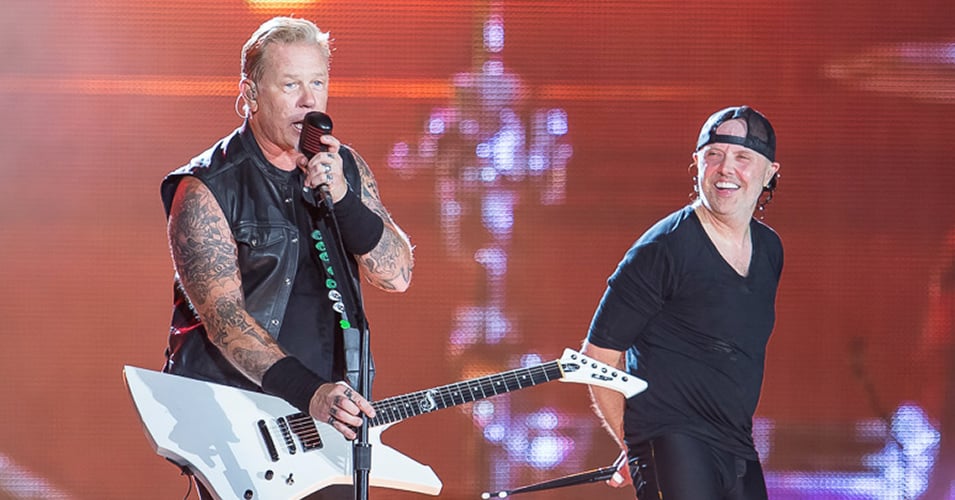 Metallica drummer Lars Ulrich joined Salesforce CEO Marc Benioff for one of Benioff's livestreamed fireside chats earlier today, and when the discussion veered on the topic of a new album from the band while in quarantine, Lars said "if you and I and the rest of the world are sitting here six months from now or a year from now, I'd say there's a very good chance."

You can watch the whole conversation below. Lars noted the band has a weekly meeting via Zoom and are itching to get creative. He noted all the members are in four different states right now, but if restrictions ease up in California, they may hunker down in their practice space to work on new music.

If they can't get together physically, Lars seemed very open to the idea of recording new music remotely and testing their creative limits with technology.

Here's exactly what Lars said, as transcribed by Blabbermouth:

"How do we make art? How do we share it with this new paradigm that's happening? What can it look like on the other side of the new normal? Even if you bring it into our world, the people that make all the software and all the stuff that all use to record are sitting right now trying to figure out how Lars and James [Hetfield] and Kirk [Hammett] and Rob [Trujillo] can make a Metallica record from four different locations in four different states. And that's something that we're obviously circling and very excited about… A lot of that will, obviously, have to do with how long stay-at-home orders stay in place. A lot of that will have to do with if there's a second wave of the virus. Who knows what our world will look like six months from now? But, obviously, the one thing that you can depend on with creative people, for better or worse, is that they can't sit still for very long. And I can tell you that on these weekly Metallica Zoom sessions, we are talking about how we can just be a band again. And there are many different phases to being in a band, but the most basic one, and certainly where it started 37 years ago, is to just have four guys playing music together. The fact that it ends up being shared all over the world and connecting with millions of people, that's much later and a whole different thing. But at its core essence is just four guys in room, or connected via Zoom, making music together. And I can tell you that all four of us are really excited about what that could look like. So, will there be a Metallica quarantine record? I can't tell you, because, again, I don't know how long the quarantine will last. But if you and I and the rest of the world are sitting here six months from now or a year from now, I'd say there's a very good chance."

Prior to this, Lars was discussing what a shock to the system it's been to have his entire schedule canceled and just be told to stay at home:

"We've been sitting around in the last four to six weeks and having numerous conversations. The four members of Metallica connect via Zoom once a week, and it's great to connect. All four of us are, obviously, in four different locations in four different states right now. But one topic of conversation on these weekly Zoom sessions is what does it look like going forward? What will the next couple of months look like? What will the rest of the year look like? And what will, obviously, say, the next decade look like in terms of how do we create, how do we write music, how do we record music, how do we share music, and how is it all gonna look with the uncertainties ahead of us.

"I think for people like myself, for people in the band, for people in our organization, we can get very comfortable with knowing everything that's in front of us," he continued. "I could pretty much walk you through what the rest of my 2020 looked like, I could start walking you through what my 2021 looked like. We planned everything years ahead. We know where we're gonna be — our calendars and our iPhones are full of all these appointments and all these places we have to travel and so on. And I think it's a great lesson for people like ourselves who like to steer and be on top and control every element of our existence that, all of a sudden, we are sitting here now for the first time in memory not knowing what does the rest of 2020 look like.

"I was supposed to be in Brazil this week and playing shows all over Latin America," Lars added. "They've all been moved to the fall. We were supposed to play festivals all over North America in May. They've all been moved. But now some of those ones that have been moved to September and October, one of them was canceled last week, in Kentucky. And I'll have to say, as you and I sit here, I don't know what the rest of those rescheduled dates will look like. I hope, obviously, that we can come out and play and that we can connect and we can bring people together in these situations through music, but you and I both know, and everybody listening in and watching knows that there's a significant chance that none of those dates are gonna happen, because the idea of bringing tens of thousands of people together in concert settings is maybe just not the right idea for the health and safety of everybody in 2020. So the fact that we once again find ourselves find ourselves in situations where we don't exactly know what the next six months or the next year of our lives look like, I think, is a very, very valuable where we have to kind of surrender to the moment.

"Like I said, the guys in Metallica, as we sit here and go, well, maybe in a month or two from now, is there a chance that the four of us can be together maybe at our studio here in Northern California, if the quarantine and stay-at-home orders subside — so on and so forth. So, right now, as everybody who has creative juices flowing through their veins, they're being challenged to try to come up with new ways to be creative, and I think that those are wonderful takeaways from the devastation that's happening all over the world at the moment."

Metallica were scheduled to play five shows for Danny Wimer Presents in the States this year, but currently, only one remains on the books – Aftershock Festival in the fall.

The entire interview can be viewed below.

Leading Through Change: How to Connect with Your Fans from Home

This week in Leading Through Change, Lars Ulrich of Metallica and Salesforce CEO Marc Benioff will discuss staying in tune with your community and the relief efforts led by the band’s foundation All Within My Hands. Plus, see a special musical performance.