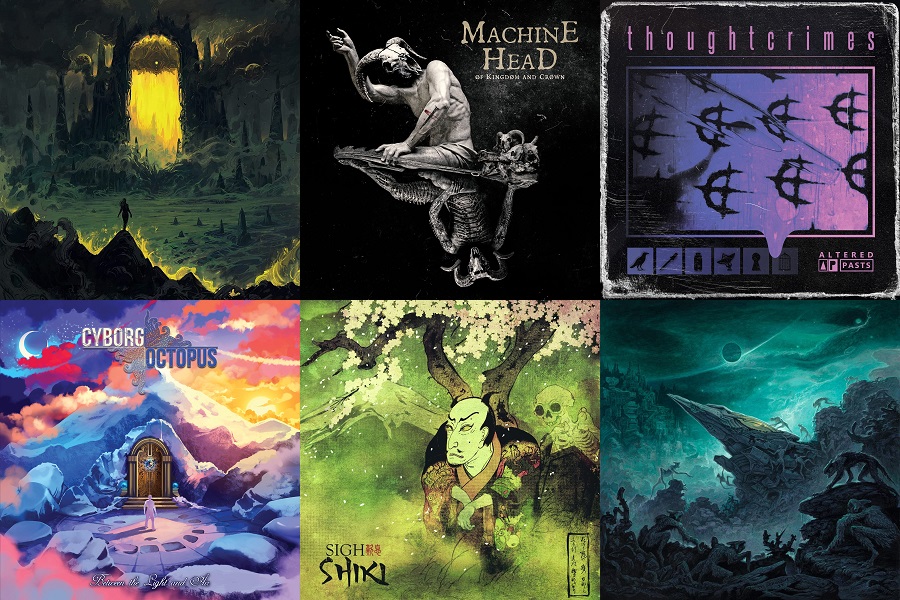 This week's new heavy metal releases include melodic goth grooves, just a lot of different flavors of chaos, and more! You can also check out select new releases here on vinyl via Gimme Metal. Now to the metals…

Becoming The Archetype – Children Of The Great Extinction

Getting this party going with some epic heaviness. On their first album in a decade you're getting the band as a trio as Seth Hecox is rejoined by Jason Wisdom and Brent Duckett. If you were fond of Celestial Completion, you'll probably be stoked about this one.

Cyborg Octopus – Between The Light and Air

We in the Metal Injection compound are rather fond of Cyborg Octopus. Earlier this week we had the honor of presenting you the premiere of their latest single "Trash Island," which is a progressive surf metal track, and this album sees other wild genre blends. You're also getting a western-inspired track ("Spectres"), a classical/shred adventure ("Seizure Of Character"), and more.

Now let's slow things down a little. Dreadnought's latest is just as adventurous as Cyborg Octopus, but leans way further in the doom territory. You're getting some jazz, folk, classical, and post-rock mixed in as well. Get it on vinyl here.

Lacrimas Profundere – How To Shroud Yourself With Night

Now some driving darkness for my gothic pals out there. Album number fourteen sees the band proving they're still one of the best and blending straight-ahead grooves, soaring symphonics, and catchy choruses all under a spooky cloud. They do a hell of a job filling the void that HIM left behind while mixing in some Insomnium and or Paradise Lost heaviness. Get it on vinyl here.

Machine Head – Of Kingdom And Crown

On their first record since the divisive Catharsis, Robb Flynn and the fellas are tapping into sounds closer to their Blackening/Unto The Locust era. If you enjoyed last year's EP/triple-single Arrows in Words from the Sky, you'll enjoy this. Those three songs are all present in addition to new songs in that realm. Shaun has a full review here. Get it on vinyl here.

If you know Sigh, you know to expect just about anything from the long-running avant-garde metal band. The track below, "Satsui," is oddly groovy before breaking into a Spaghetti Western-ish chorus (classic combo). Other tracks pair Judas Priest blended with Deep Purple-esque heavy metal and traditional Japanese flutes. I could fill an entire page spoiling the twists and turns on this one, but I'll let you enjoy all their surprises. Get it on vinyl here.

Unintentionally set up this weeks featured albums to be rather chaotic. You're welcome. Altered Pasts is a thirty-five minute eruption of dissonant mathcore, hardcore grooves, and a fair amount of melody juxtaposed along the way. What else would you expect from a band with ex-Dillinger Escape Plan drummer Billy Rymer? Get it on vinyl here.

ROBB FLYNN Thinks You're Lying About Hating The Burning Red

"There were a lot of motherf*ckers lying about not getting that record."

Robb Flynn is back into festivals, it seems.

ROBB FLYNN Reflects On MACHINE HEAD's "Is There Anybody Out There?" Being Their Top Song On Spotify

It was only a standalone single.