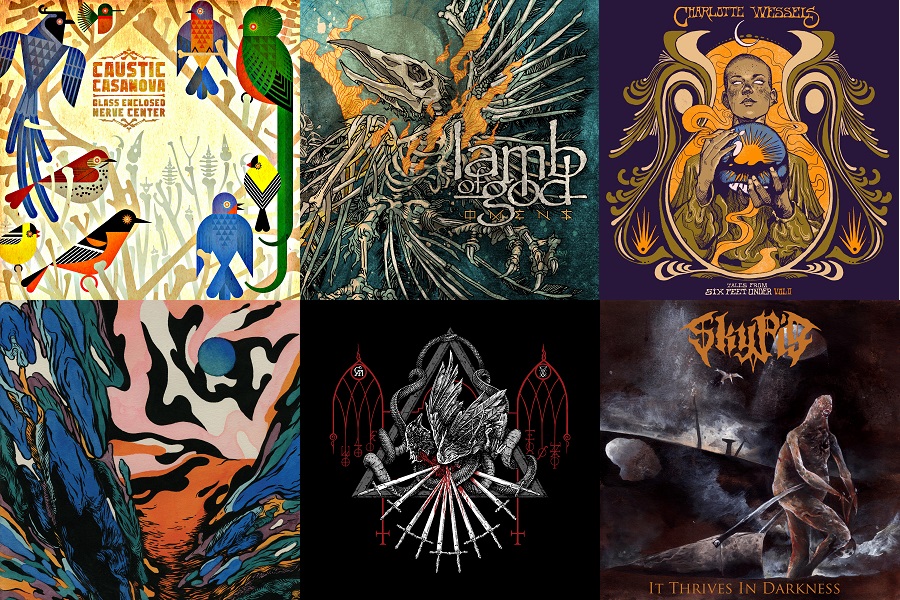 This week's new heavy metal releases include crushing slow metal, a few genre jumpers, a couple old faithfuls and more! To the metals…

ALSO! Today, Bandcamp is doing one of their days of giving 100% of what you pay directly to the labels and artists as Covid-19 Pandemic relief. So if you can get stuff from Bandcamp, please do. Or get some stuff over via Gimme Metal.

Starting things off real heavy this week. The first full-length in almost a decade from these fellas is nasty in the best way. It may just be because they have a song with "phlegm" in the title. Gross. Anyway, this has a fair amount of crunchy mid-tempo grooves, but the money is when things slow down. Get it on vinyl here via Gimme Metal.

Here is a fun, weird one that's right up my alley. You're getting a dynamic range of genres and vibes that is ultimately anchored in at a riffy center. This is like a blend of Like Mastodon, Baroness, Brutus, Queens of the Stone Age, and The Dead Weather. Get it on CD and vinyl here via Gimme Metal.

If you want some gritty chaos, but you're on a time crunch then the latest from Cloud Rat is the one for you this week. These songs are explosive, brief, intense, and dense. This is certainly one you'll need multiple listens with to catch everything. Get it on CD and vinyl here via Gimme Metal.

Canada's every-genre-under-the-sun-but-let's-just-say-art-punk Fucked Up has returned after last year's stellar Year of the Horse with four tracks of artsy hardcore. These songs are less lengthy than those on Horse, but they are just as adventurous. This band is mighty prolific and a hard one to keep up with, but trying is very rewarding. Get it on vinyl here.

Goatwhore – Angels Hung From The Arches Of Heaven

Goatwhore's first record in half a decade is a whirlwind of blackened thrash. Tremolo picking, blast beats, and darkness non-stop. This album sounds like leather and spikes. Jeff has a full review here. Get it on vinyl here.

Lamb of God's ninth (sort of their eleventh, but whatever) album is everything you'd want from a Randy and the fellas. Mark and Willie do that one really good high chord (you know the one), the riffs are killer, and the grooves get your body hopping. The title-track features some friends from Body Count, Cold Cave, H2O, and Youth Code which is fun. Shaun's review is here. Get it on CD and vinyl here via Gimme Metal.

Liturgy – As the Blood of God Bursts the Veins of Time

I Love a surprise release that doesn't drop on a Friday so I have time to write about it. This dropped Wednesday, so the headline should read "10/7-ish". Anyway, the EP features four tracks of black metal tracks with all sorts of fun noises added in. There are glitches that made me think my laptop was crashing, synths, bells, and more. This ought to hold you over until the full album drops next March.

Sky Pig – It Thrives In Darkness

After a pair of really solid EPs, Sky Pig are finally making an impact with their first full-length album. This debut is six tracks of lurching heaviness that takes inspiration from Melvins, Yob, and all things low and slow.

Like last year's Tales from Six Feet Under, Vol. I, Vol. II has the former Delain vocalist exploring more genres that you may not expect from her. Fans of her former band will still get some symphonic metal, but there are also some sweeping acoustic tracks, a sorta-blackened synth track, and more. Get it on vinyl here via Gimme Metal.