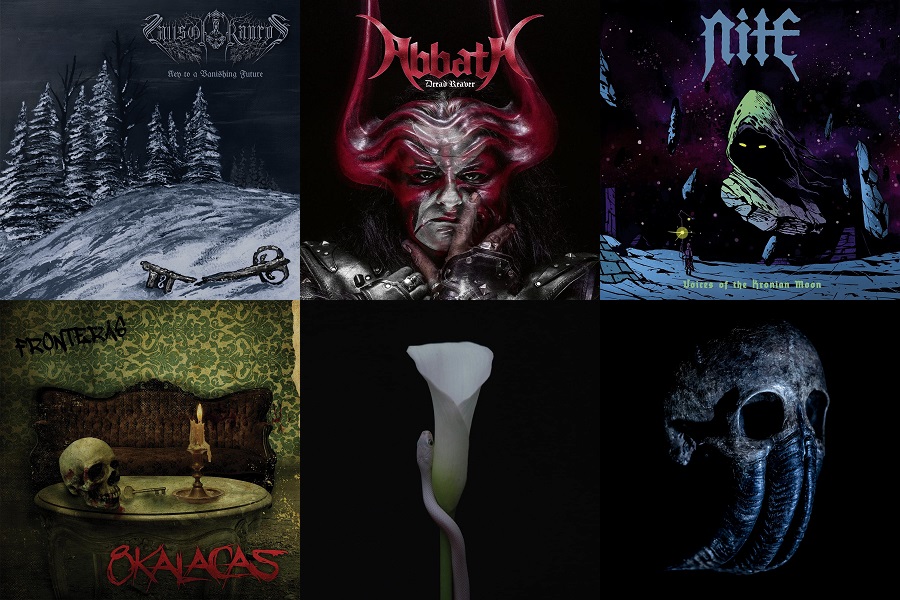 This week's new heavy metal releases includes sad doom pop, beatdowns with a horn section, the winner of a Tim Curry from Legend lookalike contest, and more! To the metals…

Starting this week with some aggressive skanking. I'm rarely surprised by a band doing this thing each week, but when I heard the rage-infused ska of 8 Kalacas I was caught off guard. The closest band I can think to compare them to is Russkaja. Like every ska album, this sounds like a party. However, a fight broke out at this party.

On album number three from the ex-Immortal frontman, you're getting his biggest musical shift yet. Sure, you're still getting driving back metal, but beneath that grim surface there are also plenty of catchy moments, atypical rhythms, and fresh song writing. Jeff has a full review here.

Scott Kelly (Neurosis), Mathieu Vandekerckhove (Amenra), Colin H Van Eeckhout (Amenra) and Iggor Cavalera (Cavalera Conspiracy) have all come together to create some rather unsettling noises on Plague God. As you might expect when this is heavy, it's heavy as fuck. There is also this odd balance between ethereal, floating moments and moments that sound like you're being enveloped by a swarm of bugs. It's a weird, dark, but oddly satisfying time.

These instrumental wizards have finally returned after a six year gap with a record of guitar thumps and djenty rhythms. Many staples of an AAL album remain, but there are new approaches to old tricks and a bigger emphasis on an electronic backdrop in some songs. This might be their weirdest album yet. Jordan has a review here.

I'm starting to think the Studio 666 film was just an excuse for Dave Grohl to make another metal album. I'm not mad about it. This reminds me a big of some of the darker Probot tracks and sees Grohl channeling Venom, Slayer, and other old school metal gods.

Falls Of Rauros – Key to a Vanishing Future

If you're in the mood for something epic that won't cheer you up, you should give this frosty record a spin. Over the album's six tracks you'll be transported to an icy realm than features lots of blast beats, tremolo picking, and atmosphere. If you've been looking to fill the void Agalloch left when they broke up, this might be that band, and this album would be the perfect place to start with them.

Nite – Voices Of The Kronian Moon

Like Fall of Rauros, Nite are bringing some black metal with a twist. However, Nite are throwing some big 70's old school vibes into the mix. They're sort of like a bizarro Kvelertak in that they utilize big harmonies and galloping rhythms. The vocals are more evil and the chords are minor for these guys. You're still dancing, but there's some unease in the room.

Wrapping this week with something different. This is sad floaty doom, but it's not quite metal. The aura is dark and the songs are beautiful though. It's hard not to think of folks like Emma Ruth Rundle or Chelsea Wolfe while listening to Emily Jane White. So, if you dig them, you'll probably dig this.