THE WEEKLY INECTION: New Releases From GOJIRA, EVILE, and More Out Today - 4/30 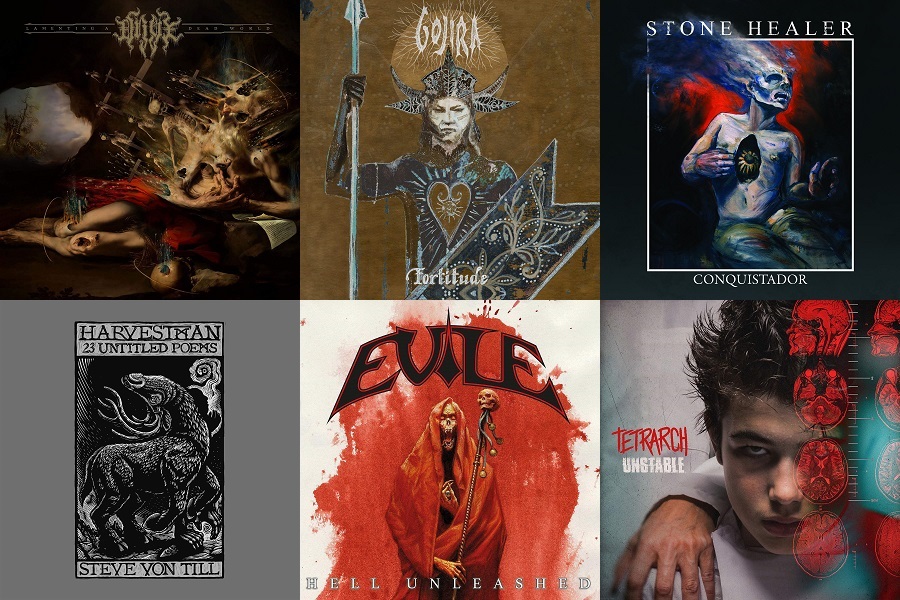 After eight years Evile have returned with a shaken up line-up. Lead guitarist Ol Drake has taken over on vocals and RipTide's Adam Smith is helping out on guitar. This is still all the thrashy goodness you'd want from the band plus their take on Mortician's "Zombie Apocalypse."

Everyone's favorite groovy, proggy Frenchmen have returned with one of their heaviest records that doubles as one of their most melodic. This really sounds like they're trying to be all versions of Gojira at once. "The Chant" would have fit in on Magma perfectly and "Into The Storm" would have been a natural inclusion on L'enfant sauvage. This album rocketed Gojira to the top of my must-see post-pandemic list, because I know these songs will crush live. Chad has a review right here.

Now for something a bit darker, and "a bit" is certainly underselling this. Lamenting A Dead World sounds like a grim Primitive Man record with slow dissonant heaviness, but this has more of a black metal lean to it. This is not a jaunty fun time.

Oh hey! A surprise live album from Pig Destroyer! Neat! This was recorded over two nights in 2019 at New York's Saint Vitus. It's twenty-three tracks of chaos and aggression covering much of their career. Also, technically this dropped yesterday, but I'm sure one of you would have been peeved if I didn't say something.

On their debut album the duo also known as Log Driver are trying on a weirder black metal identity. Conquistador reminds be of a lot of bands like Opeth, Enslaved, Gorguts, and Krallice all without sounding like any one of them for too long. The songs are long, epic, technical, rhythmic, and strange. Do not sleep on this one.

If you're looking for some driving Slipknot-esque grooves or even something like the heavier moments of  Linkin Park with lots of modern flourishes, then look no further Unstable. This band is undeniably heavy and catchy as fuck. If Tetrarch doesn't get the same kind of blow up that Code Orange got over the last few years after this album, that's a crime.

With this album we're following Steve von Till from Neurosis down a new path for him. Last year, he released the ambient album No Wilderness Deep Enough on the same day as his first book of poetry called Harvestman – 23 Untitled Poems. Today he has released a spoken word album of that poetry book, as well as an instrumental version of his ambient record (that's brand synergy). Steve's voice is being modulated and there's a weird aura throughout the four tracks on this, so it's not just someone talking. It's more musical than you'd expect from a spoken word album.

Wrapping this week with a black metal bonanza! Now, I'm not sure what technically makes something a bonanza (and I won't look it up), but this has tremolo picking, blast beats, a sinister aura, and just the right amount of melodic bits. I almost slept on this album, but I'm sure glad I didn't. This is the perfect soundtrack to forest adventures.