Throwback Thursday: CANDLEMASS'S Iconic <em>Nightfall</em> is About to Turn 30

Welcome to Throwback Thursday! This is the place where we get to indulge in nostalgia and wax poetic about excellent metal of years past. This series embarks on a journey in search of albums that have primed the canvas of today's metal music scene.

For this, the fourteenth edition of this series, we're getting hyped about an album whose 30th anniversary is just a week from now on Nov 9, 2017. This album is popularly considered the birth of doom metal by many critics and fans alike. I am of course talking about…

It shouldn't surprise you that in the 30+ years since Candlemass formed, they've been through line-up changes which have on more than one occasion almost ended the band entirely. Because of this, giant album Nightfall almost never came to fruition.

Nightfall was born when the band was signed by their London cab driver David Constable to Axis Records after hearing track "Bewitched":

Before we launch into lineup changes, can we please talk about that video? I really, really hoped you watched that 7:35 masterpiece directed by Jonas Åkerlund. Does that name happen to sound familiar? Jonas Åkerlund is a former, early (1980's early) member of Bathory. Since directing the video for "Bewitched", he's gone on to work with Lady Gaga, Beyonce, and he even won a Grammy for Madonna's "Ray of Light" music video. That's right, a guy from Bathory grew up to rub elbows with Hollywood's elite and win tons of MTV Music Video Awards. Anyway… This video, and this album, introduces powerhouse vocalist Messiah Marcolin to the Candemass lineup. Prior to Marcolin joining the band, Candlemass had only released one other album with a different singer. Epicus, Doomicus, Metallicus, their first album, was recorded with in initial line up of Leif Edling (initial lead vocalist and still-remaining original member), Mats Ekström and Mats Björkman. The album was not a commercial success, and Candlemass was dropped from their label Black Dragon Records. Their sophomore effort Nightfall dropped Ekström due to his inability to attend rehearsals because of his night-shift job and was replaced by Jan Lind. Nightfall also introduced King Diamond guitarist Lars Johansson, who 'fell over a fence and broke his arm' and had to also be replaced. Mike Wead came to replace him and with new vocalist Messiah Marcolin in place, Candlemass could finally complete Nightfall.

It's still a bit hard for me to believe that this album is 30 years old. So many popular bands, including some of my favorite bands, have been inspired by the sound that this album established. Ghost is an example that jumps to mind. Take a listen to track "At Gallows End" and tell me that you don't hear the influence:

At 1:04 we hear classic riffitude. I also absolutely adore Marcolin's vocals. They're so operatic, yet clear and powerful. They don't have the same alienating screech-like quality as many of his contemporaries at the time, but in a huge way I love the hugeness of his chest-voiced tight vibrato.

Songs like "Bewitched" and "At Gallows End" are so familiar. The style is so iconic and used so frequently in today's music. You can really hear the inklings of the beginning of 'doom' metal in tracks like "Samarithan":

Goddamnit, this album is so good. In this track, you can hear their early Black Sabbath influences blending with 1980's trends. The result is a commanding song like "Samarithan". I once read a comment about the songs on Nightfall by a bewildered internet user that said something to the effect of "this metal doesn't make me wanna bang my head, it makes me wanna sit on my couch and get high". Well, yeah, I get that. "Samarithan" is a phenomenal song. Slow, bold, powerful, with a few uncomfortable chord changes combine with a simple and compelling story to create early doom metal.

Track "Dark are the Veils of Death" introduces classic doom tempo changes and a bitching guitar solo at 2:50 in:

The solo is so appropriate there. And, it's not just a "look at my flashy headband" guitar-humping solo so popular with the bands of the day; it's expressive and interesting and cleverly devised. It shows restraint, creativity and speed for an entire minute before the constant, march-life riffs break back in with Marcolin's soaring vocals at 3:45.

This album kicked off the start of Candlemass's success. I mean, how could you not find success with Messiah Marcolin at the helm?

If you're sufficiently hyped up for the re-release next week, you can visit here to pre-order the 3-CD set. As far as I can tell, there are no plans for a re-release on vinyl.

Are you a Candlemass fan? TELL me about it!

In this article: candlemass, nightfall

CANDLEMASS Is Recording A New Album

It's being mixing right now. 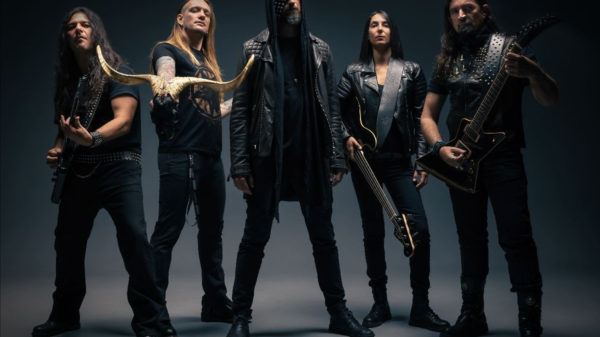 Bringing up the Psalm 9 doom.