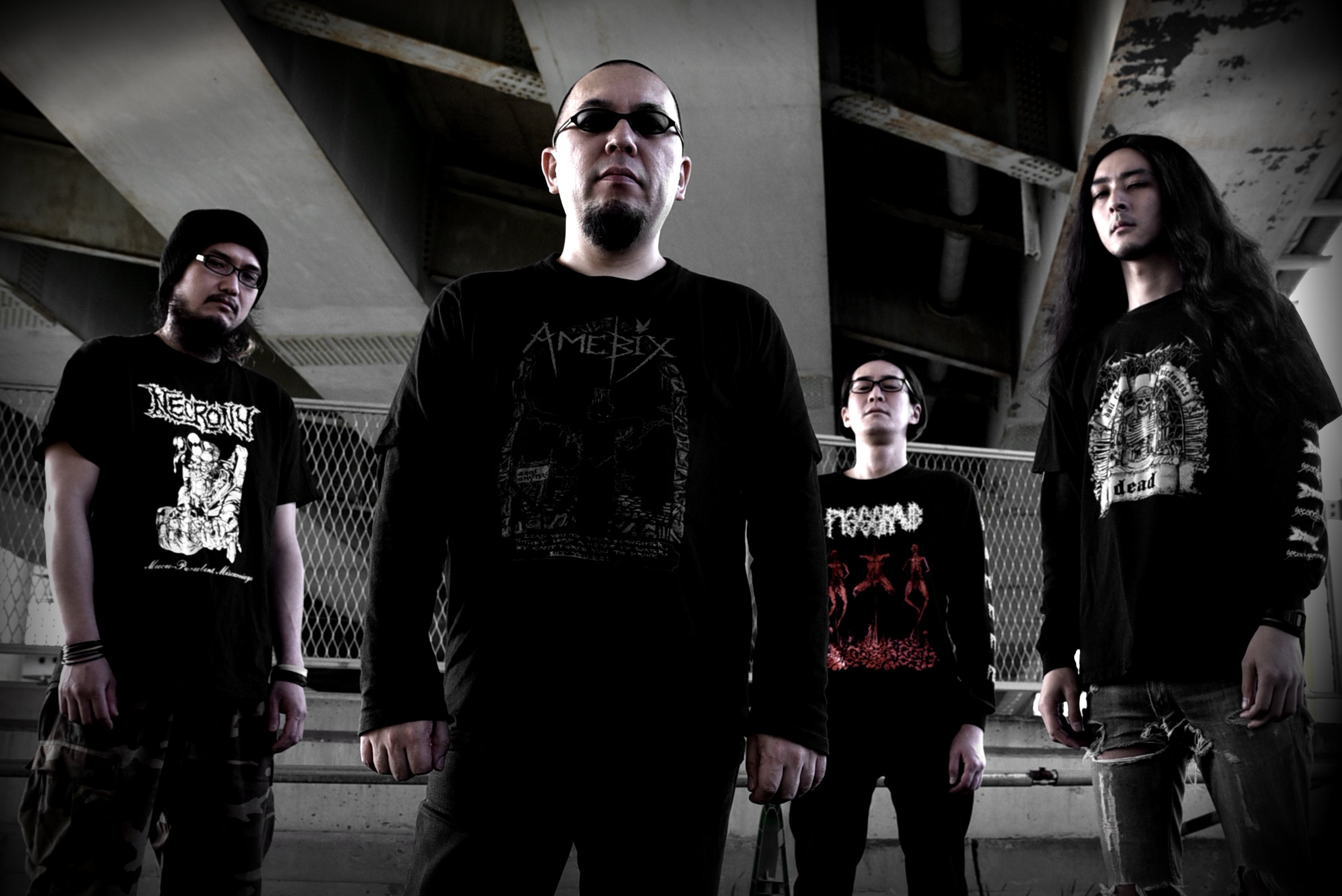 Japan is a country where limits are usually off – when it comes to dark media, anime, horror and wrestling found in the country are often bedfellows with depictions of extreme violence. With Japanese death metal, themes of violence and gore are still intact, with bands in the death metal, grindcore, and goregrind realm exploring violence, perversity, humor and human nature.

Traditional ghost myths, which come with uncomfortable feelings like dread, anxiety or spire are sometimes found within the music of certain bands as well. With bands like Gotsu Totsu Kotsu, the sound of death metal accompanies samurai themes – and why not? Death metal is the hardest form of music out there, which makes it perfect for battle preparation.

There is not one band that exemplifies everything Japanese death metal is about, so we've listed a graveyard full of influential bands who shaped the sound in Japan. So, crack open a cold coffin and kick your stinking feet up, it's time to get a little brutal.

In the crypts of Japanese death metal, Necrophile is a band that is akin to a Universal monster. The coffin was first cracked open in 1987 and soon, putrid cassette tapes were dealt out into the hands of rabid death metal maniacs in the Tokyo area. From 1991 – 2012, though, the coffin closed and the band went on hiatus, though drummer Takashi Tanaka went on to be a part of Transgressor, Anatomia, and Wormridden. Since their comeback, they have headlined such fests as the Asakusa Deathfest.

Defiled made their debut in the early 90s, when death metal was truly a new, blossoming sound and when every grotesque lyrical idea for the genre wasn't played out yet. With Defiled, they have never gone the strict gore route, though, instead conjuring feelings of disgust and anger for their motifs. On the strength of their first demos, they were granted tours in Korea, and the US, which on their first trek, played with Monstrosity and Angelcorpse. After this, they released Erupted Wrath via Nightfall Records in 1999, and since haven't looked back. Currently, Season of Mist handles the band, releasing their last four records.

No band personifies Japanese death metal more than Coffins. Formed in 1996, you won't see many death metal festivals in the country worth their weight in ashes if they don't include Coffins on at least one of their iterations. Handled by Relapse Records these days, the Coffins are thus put in more comfortable positions than a basement in Dracula's castle, being booked on various festivals abroad. Buried Death, The Fleshland, and Beyond the Circular Demise offer just the right death stench aroma for a night out at the mausoleum.

"Samurai and heavy metal are very similar, in terms of spirit." The noble followers of the samurai code, Gotsu Totsu Kotsu, have been respectfully wielding their instrumental weaponry since 2000, perfecting their craft with demos until 2009, when they released a full-length roughly every two years until now. With Gotsu, every instrument is sharpened to its most lethal point and like the samurai, will fight with this form of music well after people say the art form is "dead."

In the name of vomit… Vomit Remnants are a solidified, caked up vomit stain on the shag carpet of Japanese metal, forming way back in 1997. The band has attained legend status in the Japanese death metal community, and for good reason – if Leatherface could play the drums and had a sense of tempo, he might be a good candidate for Vomit Remnants, though even if he did get the tryout, good luck doing better than skinsman Keisuke Tsuboi (Death Like Silence). The only remnant from the original lineup, Tsuboi has purged the band into their third-coming (from 2015-now after two periods of vomit-less years).

The rabid, golden-locked death/grind ensemble Hydrophobia, which means fear of water, have been a staple in the Japanese death metal scene since 1996. The band is not afraid to show the extremities of human darkness in their album covers and lyrics (along with a cheek piercing from the vegetarian festival in Thailand on their demo) and have brought their sickness to stages across the world.

Necrophile's Takashi Tanaka beats on the drums as if they had human skin stretched over them in this death/doom project he began with Jun Tonosaki. Like many two-man bands that lack a guitarist, the bass is given a dose of trioxin, making gnarly sounds it wouldn't normally. From the get-go, they have proven to be an unstoppable barrage, splitting craniums and records with many bodies in the scene, but check their full-lengths, like Dissected Humanity, for an Anatomia textbook.

Baalism is of course, the worship of false gods. This band, starting as Euthanasia in 1992, didn't wrap intestines all around these gods like a slithery mummy until 1994. Their work features more melodic guitar parts mixed with screeching, demonic vocals that sound like Pazuzu after smoking a full-pack of devil sticks. Since their latest release in 2008, they've been part of the legends stable, being a must-see band at the Asakusa Deathfest.

Kiss the cook! Hacking and slashing like their instruments were butcher's cleavers, Butcher ABC has been in the death/grind kitchen since 1994, with 2017's North of Hell, being their sole full-length. But who cares: the band has built a cult-like mythology through their raw-as-fuck, chunky slabs of music released as splits or on compilation albums and their appearances at festivals such as Obscene Extreme. Main chef Narutoshi Sekine has also been active in the business field of the scene as well, holding up shop at Obliteration Records since 1993, releasing albums from Mortify, Invictus, and Viscera Infest.

Todd McFarlane's Spawn hit cinemas in 1997, and with it a soundtrack hit the shelves featuring artists like Korn and Marilyn Manson teaming up with some of the biggest electronic acts around at the time. Deadly Spawn also spawned in 1997 and has no connection to this film or album, which feels like a missed opportunity. Like a soundtrack fit for a true violator, Deadly Spawn take the listener into a labyrinth of morbid fantasy-inspired death metal. When you get to hell yourself, make sure you grab a copy of From Beyond the Dark which is sure to be swinging from a meat hook there.

1999: When nü-metal was on top of the world, an infestation festered in the viscera of Oita, Japan. The lads were unrelenting in their approach to death metal, pushing brutality onward in song titles like "PARACOCCIDIOIDOMICOSISPROCTITISSARCOMUCOSIS" and opting to feature a deformed baby on their album cover for Sarcoidosis (like many medically inclined bands, I get a sense they are trying to repulse as well as educate the listener). They continue to repulse and educate to this very day.

If you have watched Japanese Extreme Metal: The Documentary by Visual Justice Films, you can thank Detritum vocalist Mark Keller for introducing much of the world to bands like SSORC, Butcher ABC, and Hydrophobia. Detritum is also a force to be reckoned with – with wicked, warlock-esque vocal work by Keller and chaotic riffing by Luke Ray, who also plays in Australian black metal band Ruins. Amputated Vein Records has taken care of their records – check out that roster for more sick goods.

Let's top this off with a little slam. Gorevent formed in 2004, being one of the early progenitors of slamming, brutal death metal in the country. Compared to other slam bands, Gorevent keeps it quite simple and brutal, not wanting to get fancy with high-pitched shrieks or other nonsense. Sometimes, all we really need is a little thoughtless, barbaric beating of the instruments to get us through the day, and as the band has said, regarding their album Fate, "Remorseless riffs, blunt force trauma rhythm battery and animalistic vocals – no thought, no feeling, no empathy… just base brutality."

This was a guest post submitted by Ryan Dyer. For Taiwan, Hong Kong or Macau bands, there are additional articles about the artists in these areas for your reading pleasure. Also check out his pieces on Chinese folk metal and Chinese black metal, best metal bands in China, Japanese sludge, best Japanese black metal bands, and women in the Japanese grind scene. 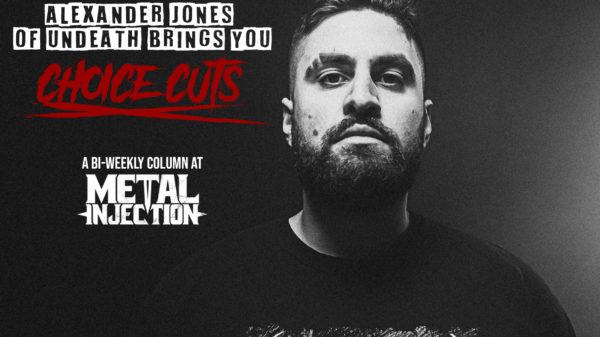 "For all death metal fans, there’s a lot to love about a band like Coffins, and The Other Side of Blasphemy puts it all...

Choice Cuts: UNDEATH Vocalist Examines The Madness Of INTESTINE BAALISM's An Anatomy Of The Beast

Undeath vocalist Alexander Jones has a record for you to listen to. 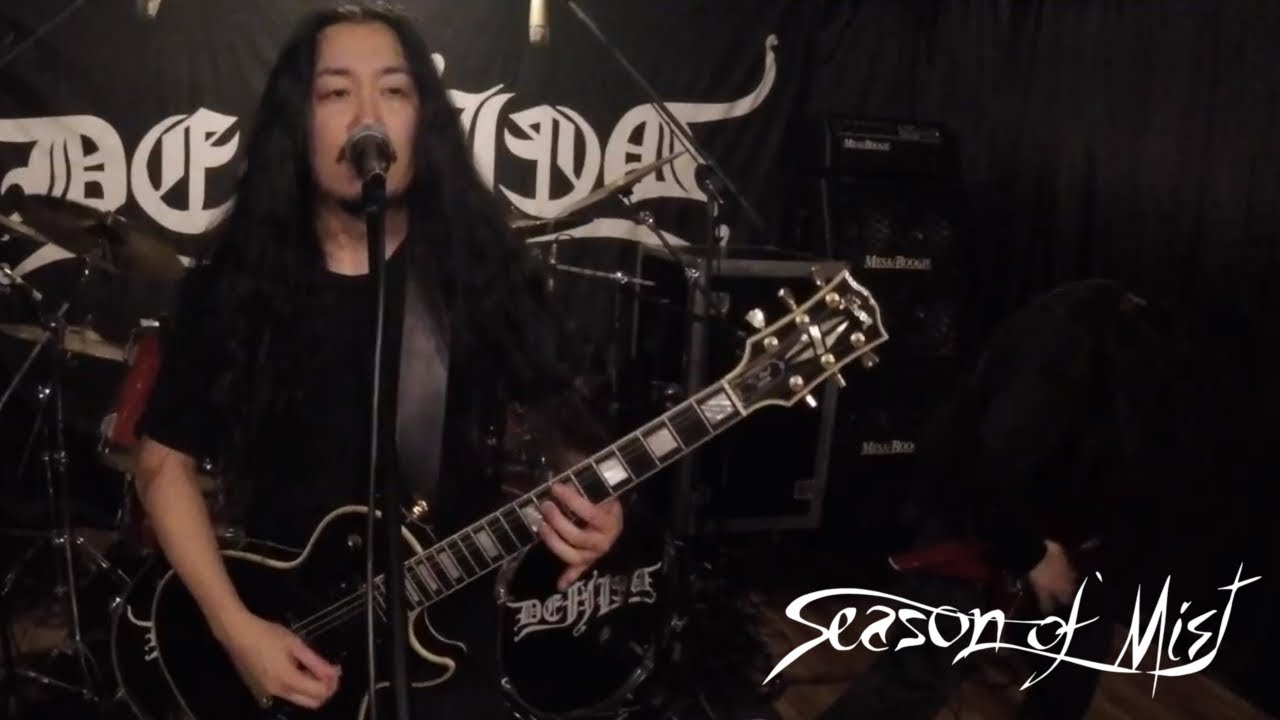 Japanese death metal for ya.