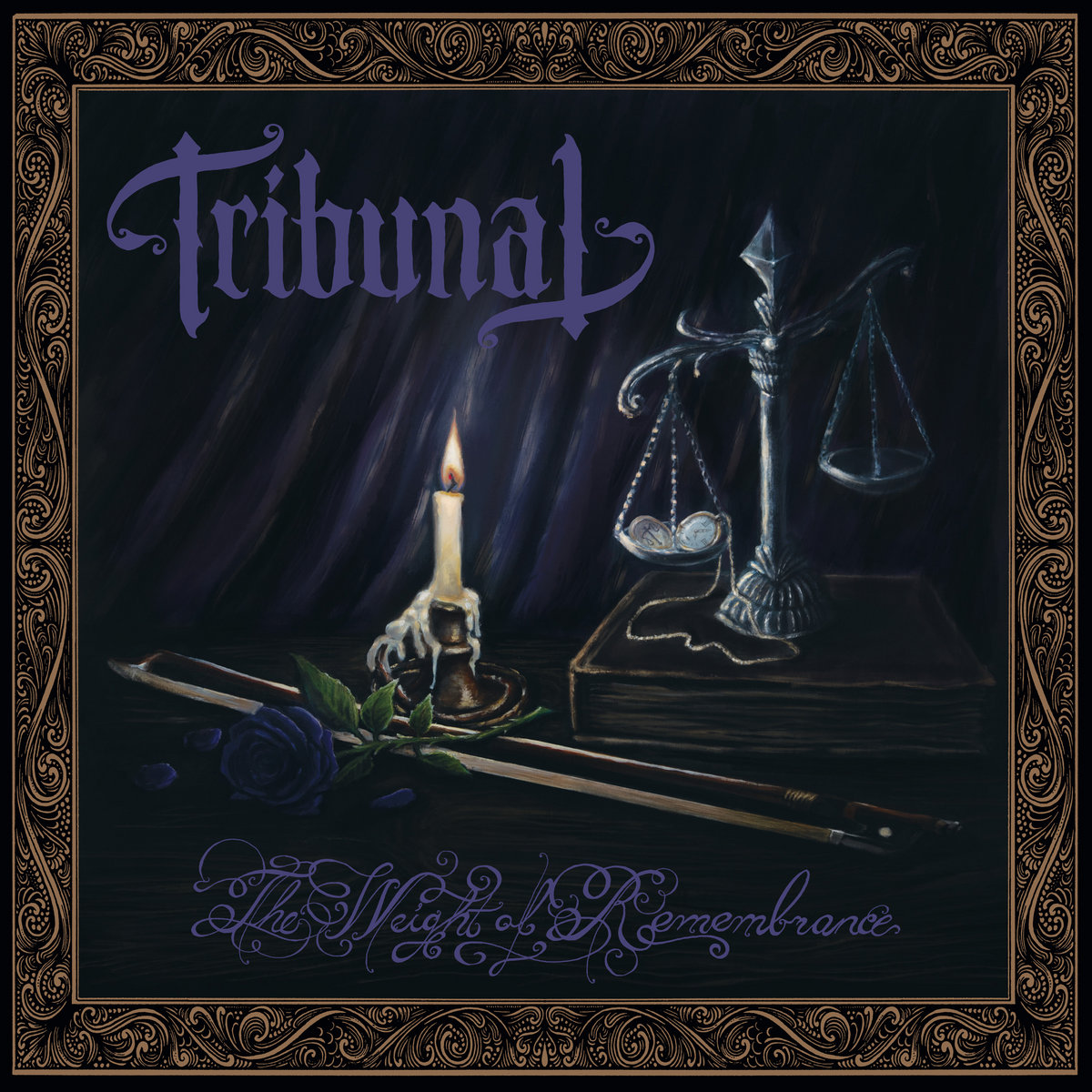 Gothic metal and doom metal have often intermingled, but Tribunal uses their particular take on these genres to avoid too many direct comparisons to the legends. The Canadian band nods to epic doomers like Candlemass help expand their death/black metal influence past the The Peaceville Three, but their diverse vocal performances and classical instrumentation is really what sets their songs apart. It's certainly an impressive array of sonics to imbue unto Tribunal's debut LP. While not exactly surprising by genre's standards, The Weight Of Remembrance is doom with a capital "D."

The bell tolls and rain effects on opener "Initiation" certainly bring "Black Sabbath" by Black Sabbath to mind, but it doesn't take long for forlorn strings built to evoke gothic castles alongside the plodding drums and elongated drums. The core duo of Tribunal makes their unique chemistry known right off the bat, as Soren Mourne's classical cello chops and old-school vocal rasps commingle with Etienne Flinn's haunting singing and immense riffs. Perhaps most importantly, each element flourishes as artistic expression instead of a superfluous add-on, whether it's the marching guitar chugs and synth drones of "Of Creeping Moss And Crumbled Stone," or the soaring melodic choruses that rocket the song's death doom verses into the stratosphere.

Tribunal uses simple, yet effective rhythm structures to put "Apathy's Keep" into a classic doom vibe, emanating Trouble-meets-My Dying Bride with its contrasting sung and screamed vocals and less-is-more arrangements. The guitars, strings and vocals don't have to compete with one another in the mix, because one really can't exist without the other to achieve the song's full effect. Perhaps this explains why that black metal waltz plays so well toward the end. Even the guitar solo in "Without Answer" shows Flinn's understanding of what the song needs. Riffs ebb and flow naturally with the classical embellishments, knowing when to beef up the heaviness and when to focus on melodicism. In the same way, Mourne's growls and Flinn's singing achieve emotional resonance not only by their tasteful placement within key mood shifts, but also knowing when to leave entirely and let a new riff make its presence fully known.

Speaking of riffs, they get cooking the quickest on "A World Beyond Shadow." With added propulsion with sparsely used double-kick drumming, this song's catchy leads and gnarled distortion displays how Tribunal understands the foundations of goth/death doom while. It's poetic, that the preceding interlude "Remembrance" displays the delicate, eerie end of the album's sonic spectrum with dramatic piano embellishments from Claine Lamb and, of course, the rain samples. The balance between these two extremes almost seems scientifically executed, but that honestly comes as a slight to how organic this band operates as a two piece—not to mention the organic drum performances from session player Julia Geaman.

Clocking in at 48 minutes, pretty short for a doom album, The Weight Of Remembrance doesn't overstay its welcome while remaining transportive and hypnotic. Tribunal doesn't use genre tropes as a crutch, as displayed by the fact closer "The Path" is the only one track that exceeds 10 minutes. The length is well-warranted, because this is where the duo pulls out all the stops for a journey as cathartic as it is complex. The clean and harsh vocals reach their emotive climax, as the dynamics give way to spiraling leads and almost danceable rhythms to harmonious mood music. And yet, all the beauty and sorrow Tribunal brings to the table doesn't take from good ol' fashioned walking-pace doom riffage.

Tribunal plays gothic doom for gothic doom fans, but this is one example of a band taking the recognized tenets of a subgenre and doing it well enough for it to stand on its own merits. Sure, the sonic hues at play here easily blend into the tapestry painted by My Dying Bride, Anathema, and Paradise Lost, but this isn't a mere repetition. This album's musicality elevates its faithfulness to the genre.