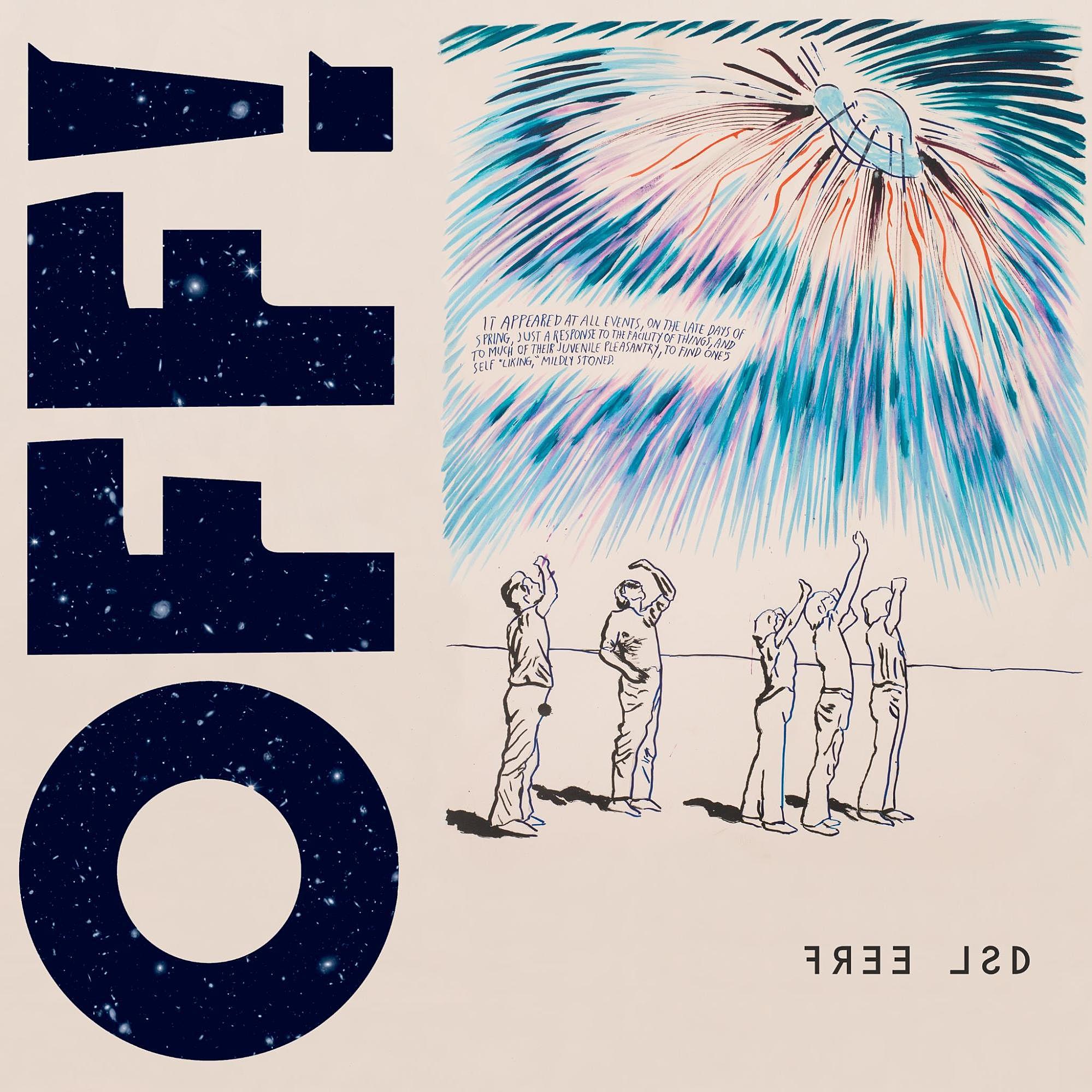 The sticker affixed to Free LSD, the new LP from OFF!, reads "The long-awaited 4th album from hardcore supergroup OFF!” Indeed, the wait has been long—very, very long. And make no mistake, the road has been just as hard. Only a few years ago, OFF! was all but dead in the water, down two key members and without a record label. The fact that Free LSD—'A Heavy Punk Industrial Free Jazz Soundtrack Recording,' as it's billed by distributor Fat Possum Records—exists at all is frankly a marvel of band perseverance. The reward for that perseverance, however, is a rare artifact; a binary destination album that drives the soundtrack to a forthcoming film of the same name, and lives, breathes, screams and speeds in a lane of its own as a conceptual work of music that assails the ears and annihilates consciousness."

OFF!—led by Circle Jerks/ex-Black Flag singer and punk legend Keith Morris—spent the better part of the last decade riding the success of their many critically-acclaimed releases. Formed by Morris and guitarist Dmitri Coats (Burning Brides) with Redd Kross/Melvins bassist Steven McDonald and the Earthless/Rocket From the Crypt/Battalion of Saints dynamo Mario Rubalcaba on drums, their collection of 7” singles and three full-length LPs gave fans thirsty for the raw, hardcore punk aggression of Black Flag's first singles and demos something to sink their teeth into.

But, by time Metallica came calling to ask OFF! to contribute a cover of "Holier Than Thou" to the Blacklist compilation, by Morris' own omission, "there was no band to speak of." First Rubalacabba resumed his duties with Earthless. Then, McDonald returned to Redd Kross for a series of reunion dates before officially joining the Melvins full-time.

Then, perhaps most crushingly, the band—sidelined by the much maligned Vice Records label—launched a Kickstarter to help self-produce an album and documentary intended to be called Watermelon. A graphic for the project was even created and floated on social media. But sadly, the band missed its thresh to collect, and the project was abandoned.

Still, the opportunity to contribute to the Blacklist compilation was too much to pass over. Morris and Coats recruited bassist Autry Fulbright II (…And You Will Know Us By the Trail of Dead) and drummer Justin Brown (jazz artist Thundercat), along with saxophonist Jon Wahl, and a new era of OFF! was born. The first taste of what was to come came in the big-production value music video for "Holier than Thou" which recruited Jesus Lizard vocalist David Yow to play a self-righteous and corrupt preacher.

This summer, while doing promotion for Free LSD and its first single, "War Above Los Angeles," Morris told the press, "After making music for as long as I have, it was time to use a palette that includes lime green, turquoise, and magenta instead of the typical colors and shades that were involved in all of the other breakneck and car chase scenarios.” He referenced jazz legends Miles Davis and Herbie Hancock, saying it was time for "more Bitches Brew and less Milo Goes to College" contrasting the jazz pioneer Davis's seminal experimental jazz rock period with an LP that emerged from a very different era—one Morris knows well—the first LP from SoCa punks Descendants.

What this meant, ultimately, was that gone from the mix were the 60 second bangers that sounded like someone surfing the walls of a cave on angel dust and of which OFF! were known and beloved. This is not to say that OFF! 2.0 jettisoned hardcore punk—far from it actually. But what Free LSD offers in addition to a vast range of heavy style are tastes of free jazz and tech manipulation.

The album opens with the Van Halen-meets-death metal introduction of “Slice Up the Pie” which sludges about mercilessly and needles at listers with blips and bleeps of alien-like electronica before pulling out hard and fast. Most of the tracks on Free LSD are introduced by terrifying circle pint warmups—swinging fists of instrumental chaos that segue into one another, making Free LSD feel like a feral opus of foaming tantrums and uncontrollable fits.

There are very few moments of pause on Free LSD, as each track flows into the next, only pausing the chaos halfway through the album for one worthless breath of air before continuing with the mayhem. Coats guitar work blisters as fiery as it ever has, his signature tone and riffwork being the emotional center of OFF! along with Morris's fury. Saxophonist Jon Wahl's playing and the abandon of Justin Brown's work behind the kit are the linchpin of the free jazz that Morris spoke of over the summer. Brown, having already worked with the frenetic Thundercat, crashes, bangs, booms, and rolls all over his kit, and paired with Wahl's rapid-fire fingerwork, the other-worldly spiritual brain waves of both John Coltrane and Sun Ra come to mind—their pursuit of nirvana through their playing having been driven by the same wild, dragon-chasing madness that fuels the engine of OFF!, as well.

The film Free LSD has been described as "a rock 'n' roll sci-fi comedy about an LA punk band and the unexpected journey that brings them together across alternate dimensions to create the album, Free LSD." Videos for the first two singles, "War Above Los Angeles" and "Kill to Be Heard" both include footage from the feature. Based on the description and what we've seen in the videos, it promises to be a work of pulp genius—or a complete trainwreck. We'll have to wait and see. But even when the "plot" of Free LSD occasionally distracts the listener from what's going on musically—which isn't very often—by the fourth of fifth listen, a kind of abstract is already there, and any fears of Free LSD going into bloated rock opera territory (see: Green Day) are thankfully dashed.

As a result, Morris is given the room and the freedom to express himself lyrically as he always has, with raw articulation and a slightly-crazed genius. When at his best, Morris is a beasted-up Allen Ginsberg armed with unholy haikus and plenty of effigies to burn. On “Ignored," he addresses the disgrace that is our response to our veterans in crisis, and advocates for uprising. "Black Widow Group" questions whether our thoughts are really our own, which overlaps with the sci-fi meat of Free LSD, lobbing the existential softball: are really who with think we are, or are we a colony of dosed zombies being ruled by puppet masters from another dimension?

As a multidimensional creative entity, Free LSD presents a rare moment when heavy music takes another leap off the ledge of creativity and lands triumphantly on its own two feet like a titan. There’s nothing even remotely maudlin about feeling wistful for a time when music challenged us (even if it's with sci-fi comedy), and these 45 minutes here jumpstart the heart rate and immediately return us to the days of albums like Motörhead's Bomber and Anthrax’s Among The Living; the novels of author Philip K. Dick (A Scanner Darkly); the films of director Alex Cox (Repo Man, Sid & Nancy), where speed-gakked misfits peer through wild eyeballs, kicking and screaming their way through the cyberpunk Vietnam that is their existence. The only thing that may come close to that kind of the spirit in the modern era is perhaps Stranger Things, or the music of that certain group with the spectral name that's used to taking risks and not worry much about the outcome.

Regardless, I'll be keeping the popcorn ready for Free LSD: The Movie. With any luck, somebody will dose the hot butter.

Advertisement. Scroll to continue reading.
In this article: off, Reviews 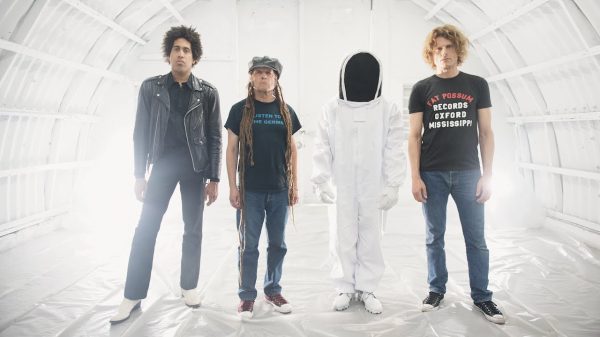 OFF! Cancel First Leg Of North American Tour As Drummer Is Hospitalized 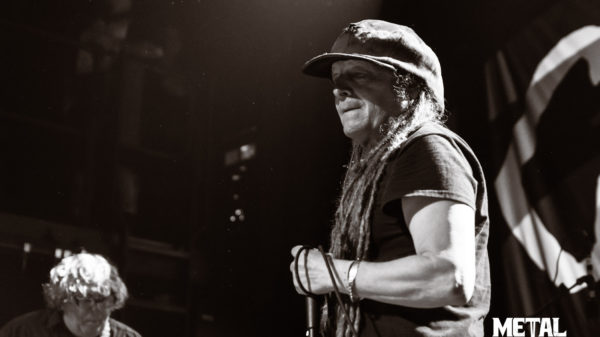 OFF! Drop First New Music In 8 Years With Video For Brutal "War Above Los Angeles"