Album Review: AUTOPSY <em>Morbidity Triumphant</em>
This newest discharge continues to elaborate on their traditional Viking metal, but looming within it is an ominous forecast of the black metal variety.

Karg, meaning "barren" is the title of King of Asgard's new album, out July 22nd. This newest discharge continues to elaborate on their traditional Viking metal, but looming within it is an ominous forecast of the black metal variety. Karl Beckman and Karsten Larsson (formerly from Mithotyn) teamed up in 2008 to create King of Asgard. They have continually evolved over their previous two albums. Their third and newest release bears the same lyrical consistency, but the music delivers a more serious communion throughout.

The melodic flow of this album fits agreeably with the Viking metal approach King of Asgard is so talented in executing. This method is presently mixed with a darker, more balanced black metal approach. At this avenue in their musical venture, this newer practice completes a complex aggregation of elements that develop into a equitable mood. In comparison to their previous album …To North, there appears to be heavier elements, and a less victorious mood. …To North exhibited a much more folk and epic sounding concentration. This form would often translate into catchy narratives engulfed by enlightening riffs. These would spawn epic vibrant victory-like charges through entire songs. Riff-based melodic journeys would encapsulate glorious defeats and masterful conquests. The culmination of these traits delivered a brighter, more enlightened mood. This evoked positive melodies and in some cases, similarities to power metal.

Karg continues the band's developments with talented composure and well constructed features, none of which are subordinate to …To North. This reflects on the band's talent and the ability of their song writing. The band's riff-based melodic tides continue, with the exception of its slightly abated speed. This only empowers riffs to drift through tunes of a darker sensation. Their lyrics continue to reflect Norse heritage and communicate legends and tales from their homeland. This is a consistent theme for most Viking metal, but in Karg, a mournful sentiment seems to color the album. The vocals remain consistently strong, but in some instances, a black metal guttural chug envelopes the sound, bringing forth a powerful arrangement. This is clearly seen in tracks "The Runes of Hel", and "Remnant of the Past."

Several of the tracks are truly exceptional. "The Trickster" contains lethargic draws through specific riffs and incorporates some heavy chanting as well. The track closes with a swingy riff that leads into the closing chorus. A personal favorite would be "Remnant of the Past." The prominent bass and deep vocals will transport your mind to a dark, but surprisingly refreshing status. "The Runes of Hel" has amazing ascending and descending guitar work that contributes to the catchiness of this dark march. Calculated chugs coupled with pinch notes accentuate the creative journey this song leads the listener through. Throughout the album there are appropriate segments in which chants and singing in unison is exhibited. This is an excellent touch that contributes to the overall mood of the album.

The album as a whole is fairly enjoyable. In the past, King of Asgard has been just another Viking metal band with nothing extra to offer. The previous albums contain great music, but nothing ground breaking for the genre. With Karg, it seems the band has really taken the leap in devising a more serious breed of Viking metal. This works in their favor as this product capers with their progression. The seriousness and layered riffs at times contribute to the complexity that is typically not sought within the genre. Normal riff-based songs can get laborious, but Karg holds enough variety to really keep the listener on their quest till the very last track. Even the simple rebranding of their logo in a ruin-like font displays the liberties the band is willing to pursue. A rating of 9/10, would be a correct assessment for this album. The replay-ability, and the ease in which one can grow accustomed to the tracks in such a minimal amount of time is quite satisfying. It will only take a few listens before its power will fully arrest the listener and transport them to a different world. 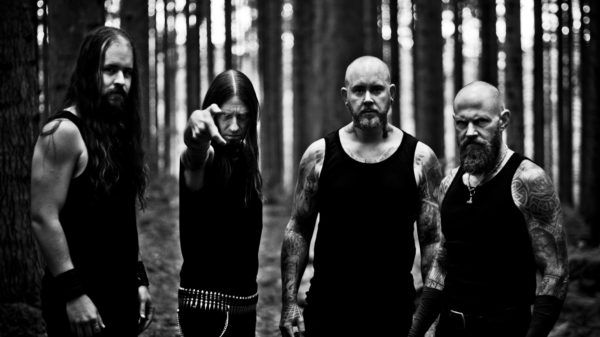 King of Asgard's new track "Kvikr" will have you hooked in a frenzy of hair whipping and sword swinging in the best way possible....

I am completely on board with King Of Asgard's upcoming release, Taudr. From the moment the record begins, you're instantly hooked in a frenzy...