SYSTEM OF A DOWN Drummer Knocks Democrats, "The True Bigots," Saying "You Can't Handle Free Speech" 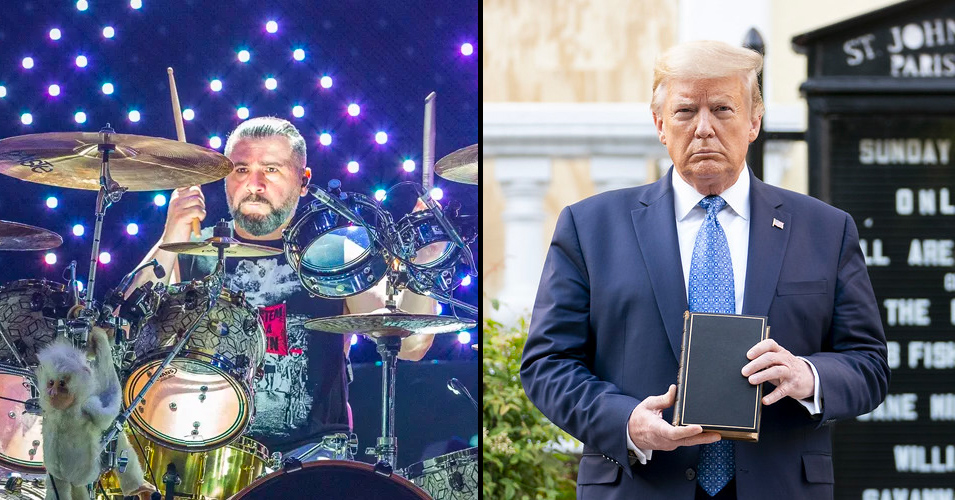 It feels like System of A Down drummer John Dolmayan is enjoying the new attention he's been getting for expressing his political viewpoint. In recent weeks, he said Donald Trump is "the greatest friend to minorities," echoing statements by the U.S. President, befopre going on to say that defunding the police is "the stupidest thing he's ever heard." In a new statement yesterday, he pushed back on criticism he's been getting, arguing people are trying to stifle his free speech and then ranted about Democrats.

I will present his opinions uninterrupted, but I want to make two small clarifications. First off, this country gives you freedom of speech without repercussion from the government for what you say. However, when you say something with your freedom of speech, it does not absolve you from criticism. Criticizing somebody for saying something is also free speech. For example, printing his statements and then pointing out how some of them are factually incorrect is not, in fact, censorship – it's still freedom of speech.

Secondly, and this where arguments like this lose me. I think it's totally fair to criticize Democrats and their shortcomings, but when you start saying things like "Democrats were for slavery," it tells me you get your history lesson from memes and not what actually happened. The Democratic Party, as it functions today, is not the same as the Southern Democrats who advocated for slavery, as history has repeatedly taught us.  There was a shift, as noted by History:

Then in 1948, after President Harry Truman (himself a Southern Democrat) introduced a pro-civil rights platform, a group of Southerners walked out of the party’s national convention. These so-called Dixiecrats ran their own candidate for president (Strom Thurmond, governor of South Carolina) on a segregationist States Rights ticket that year; he got more than 1 million votes.

Most Dixiecrats returned to the Democratic fold, but the incident marked the beginning of a seismic shift in the party’s demographics. At the same time, many black voters who had remained loyal to the Republican Party since the Civil War began voting Democratic during the Depression, and would continue to do so in greater numbers with the dawn of the civil rights movement.

Yes, Strom Thurmond, who was once the oldest Republican in Congress was once a Democrat. But he changed parties when the Democrats advocated for civil rights.

So with that said, here's John's statement:

“The reason I post my opinions on this forum and open myself up to attack and ridicule is for you , the silent ones who think they are alone in a world where their thoughts are alien or wrong. You’re not alone , millions are with you. For those of you who think you are coming from a morally superior position therefore any differing opinion or viewpoint is invalid think again. It’s the easy path to think like you , it’s in their best self interests for celebrities and politicians to support you but you will lose in the end because you are the very thing you pretend to fight against. The true fascist, the true bigots hidden in plain sight from the same party who fought to maintain slavery , Jim Crow , non voting rights for women , and who are directly responsible for 70 plus million abortions ,a large majority of whom were black. You don’t want free speech , you can’t handle free speech because you are cowards and need to be herded along with the rest of the sheep. I’m lucky , I’m in an industry where you CAN be honest about your views wherever they fall with little to no repercussions. I don’t rely on a movie studio , label , media or anyone else who will bow down to pandering political correctness and am in no danger whatsoever of “ losing my job” because you don’t like what I have to say . This is a dangerous time where free thought and speech is under attack but it will pass , the next generation is watching as they always do and they will overcome your insanity. Oh , happy birthday President Trump and good luck in November!”