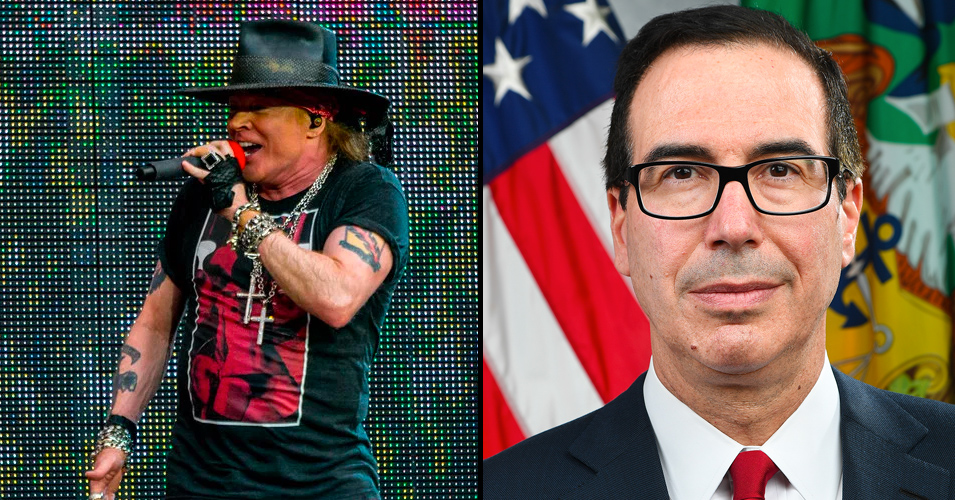 Guns N Roses frontman Axl Rose has fancied himself a bit of a political commentator as of late. Now the commentary has turned into direct action of sorts, as he just got into a hilarious Twitter back and forth with U.S. Treasury Secretary Steve Mnuchin.

Mnuchin comes from the world of investment banking, and was known around Hollywood as an executive producer with his name attached to such movies as Batman v Superman: Dawn of Justice, Suicide Squad, Mad Max: Fury Road and The Lego Movie. Then, he joined the Trump administration as treasury secretary. Mnuchin has been criticized in recent weeks for his performance. So, it's likely Rose and Mnuchin traveled in similar circles. Which led to rose tweeting this:

It’s official! Whatever anyone may have previously thought of Steve Mnuchin he’s officially an asshole.

Mnuchin either did a vanity search or a friend alerted him of the Twitter mention, as Rose didn't tag him. Mnuchin then responded "What have you done for the country lately?" Here's where things get a bit funny, because Mnuchin then posted a flag emoji, but it wasn't the American flag emoji – it was the Liberian flag. 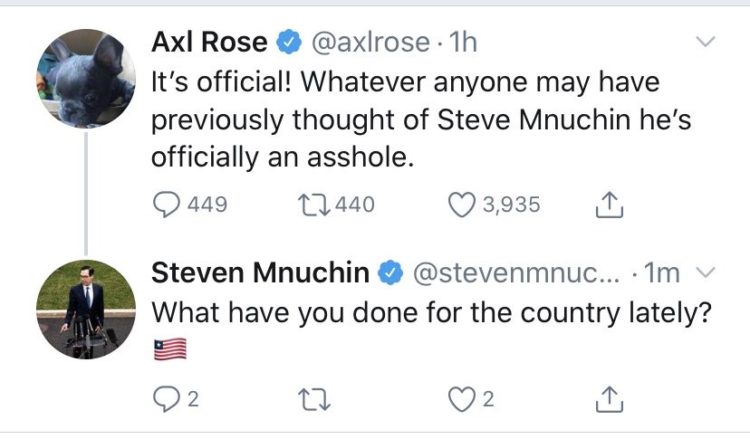 Not to be deterred, Mnuchin deleted the tweet and then posted a new one with the proper emoji. Tell 'em, Mnuch!

What have you done for the country lately? ??

Update: Axl has since responded, writing: "My bad I didn’t get we’re hoping 2 emulate Liberia’s economic model," Axl began. joking about the typo. He continued "But on the real, unlike this admin, I’m not responsible for 70k+ deaths [and] unlike [you] I don’t hold a [federal government] position of responsibility [to] the American people [and] go on TV tellin them [to] travel the US during a pandemic."

My bad I didn’t get we’re hoping 2 emulate Liberia’s economic model but on the real unlike this admin I’m not responsible for 70k+ deaths n’ unlike u I don’t hold a fed gov position of responsibility 2 the American people n’ go on TV tellin them 2 travel the US during a pandemic.

Rose wondered over the weekend if hospitals should be allowed to turn away social distancing protestors and previously tweeted "Make the White House Great Again." While Axl Rose has previously blasted Trump for using GNR music at his political rallies, I'm assuming he enjoyed the footage of Trump from earlier today.

It wasn't on purpose.