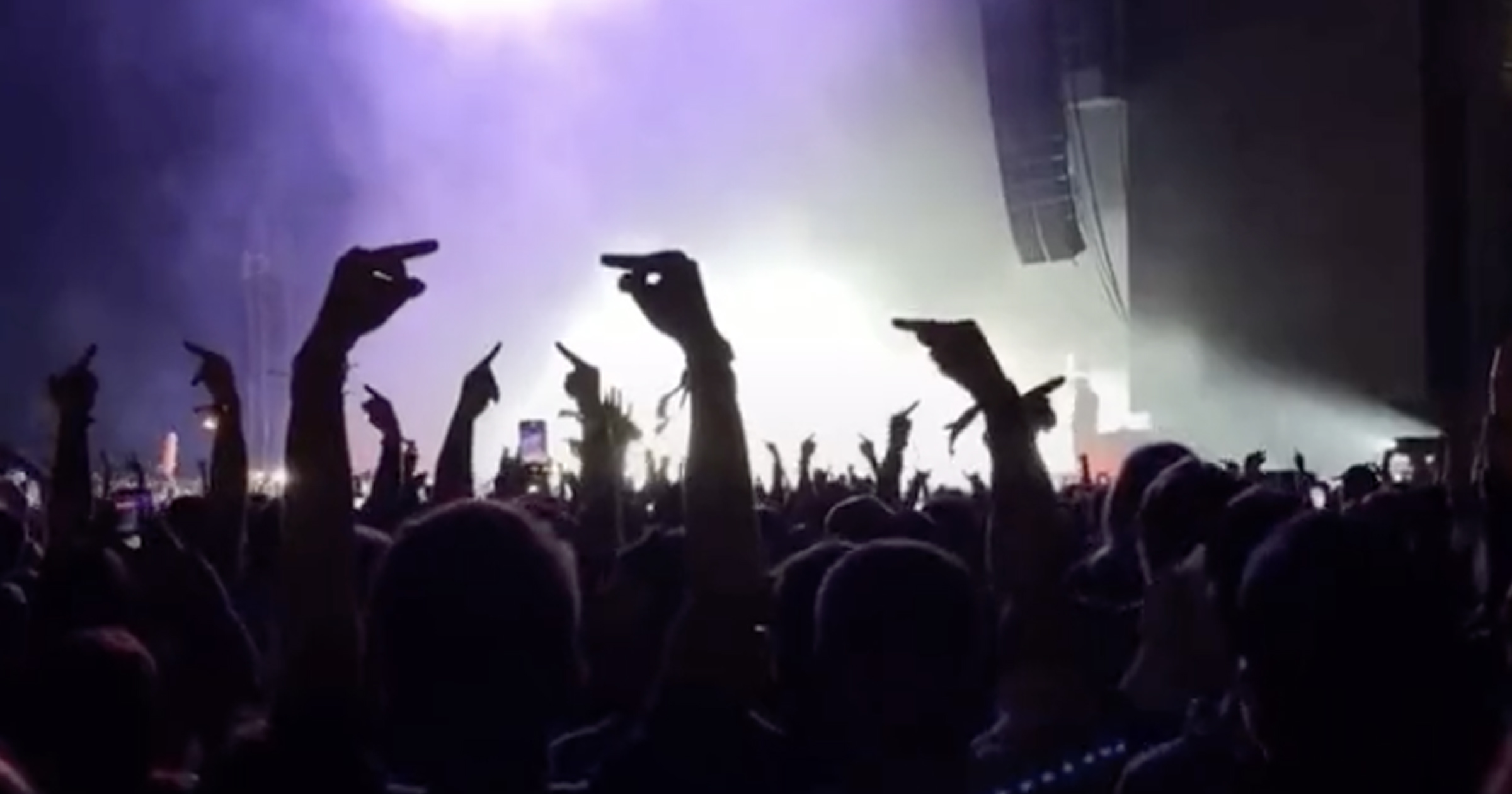 A week after  Machine Gun Kelly talked shit about Slipknot on stage at Riot Fest, the rapper-turned-punk-rocker might be regretting his actions. MGK had his first performance since the drama ensued at Louisville, Kentucky's Louder Than Life festival last night, and the rest of the bands on the bill were basically metal bands, thus, there were certainly a lot of Slipknot fans in attendance, and they made sure to show up to MGK's performance to let him know that they are not too fond of the guy dating Megan Fox.

Video footage has surfaced showing MGK trying to quell the crowd who is booing and flipping him off. MGK can be heard responding to a heckler saying "I see you dude, I see you mad as fuck in your weird fucking outfit. I'm here for the same shit you're here for [the music], so it's all good. Clearly, I'm not going nowhere, so just enjoy." At this point, MGK pulls out a lightsaber. "You keep fuckin' with me, homie? Trained Jedi, bitch!" Boos can be heard as MGK is talking. The person posting the video indicates that MGK was talking to her nephew who was donning Slipknot gear.

MGK then apparently tried to come up to the crowd to sing one of his songs, got pushed and then some chaos ensued:

MGK's onstage quote that started everything last week was “Hey, you all know what I’m really happy that I’m not doing? Being 50 years old, wearing a fuckin’ weird mask on a fuckin’ stage. Fuckin’ shit. So anyway, what’s every’s favorite candy? Reese’s Pieces?”

After getting a ton of media for his quote, MGK tweeted the next day alluding to Slipknot frontman Corey Taylor being bitter for being rejected on a guest spot on MGK's recent punk album, Tickets to My Downfall. MGK wrote "Corey did a verse for a song on Tickets To My Downfall album, it was fucking terrible, so I didn’t use it. He got mad about it, and talked shit to a magazine about the same album he was almost on. Y'alls stories are all off. Just admit he’s bitter."

At this point, Taylor had heard enough and responded. "I don't like people airing private shit like a child. So this is all I’ll say: I didn’t do the track because I don’t like when people try to ‘write’ for me. I said no to them. So without further ado…. #receipts. This is all I'm going to say about it," Taylor tweeted.

The two screenshots are of an email exchange between Taylor and Travis Barker, the producer of Machine Gun Kelly's pop punk album. The first email comes from Barker and passes along notes from MGK (referred to as Kel) where MGK noted that Taylor "killed it" on the vocals and that MGK was honored to have him on the track. MGK goes on to say he added a bridge and another verse to the track and recorded a demo track of how he thought Taylor should sing the song, particularly in the style that Taylor used on Slipknot's "Psychosocial."

The second screenshot provides Taylor's response to Barker saying "So I listened to the ideas and to be honest, I don't think I'm the right guy for the track. Nothing personal, I just think if this is what MGK is looking for, someone else is the guy to do it. It's all good and I'm stoked for him — I hope you guys find the right fit for it. Hope you understand and I wish you guys the best with it. If I can help in any way, let me know."

Here are the screenshots:

The comments MGK referred to are when Taylor wasn't too kind to him in the press a few months ago. In a February 2021 interview with Cutter's Rockcast, Taylor said that he's really annoyed by young bands that straight-up jack their sound from older bands.

"You know the band they're ripping off — they're not even trying to rip off a bunch of bands; they're ripping off one band. But the younger generation picks them up and says, 'This is our blah blah blah,' because they're tired of old people telling them that the music that came before them was better. And I don't know who's right, but I know both are wrong, because we should be encouraging everything."

Taylor went on to acknowledge he's just a big ol' grumpy grandpa, and added "I hate all new rock for the most part. I [hate] the artists who failed in one genre and decided to go rock — and I think he knows who he is," most likely referring to Machine Gun Kelly, who started his career doing pop-rap and has recently released a pop-punk type album.

"I'm just as bad. I'm the worst old fogey dude shaking his cane ever. And I hate everything. I hate all new rock for the most part. I [hate] the artists who failed in one genre and decided to go rock — and I think he knows who he is. But that's another story.

"I'm the worst. And I hate everything. And people are used to that with me, though. But I have also encouraged the younger generation to think past the boundaries of what we listen to. Do something that feels fresh; it may not have to sound fresh, but it's gotta feel fresh. If it's dead, then people are gonna treat it as dead, man."