TRIVIUM's Matt Heafy Reflects On Being "Public Enemy No. 1" on Ozzfest 2005 & How They Overcame It 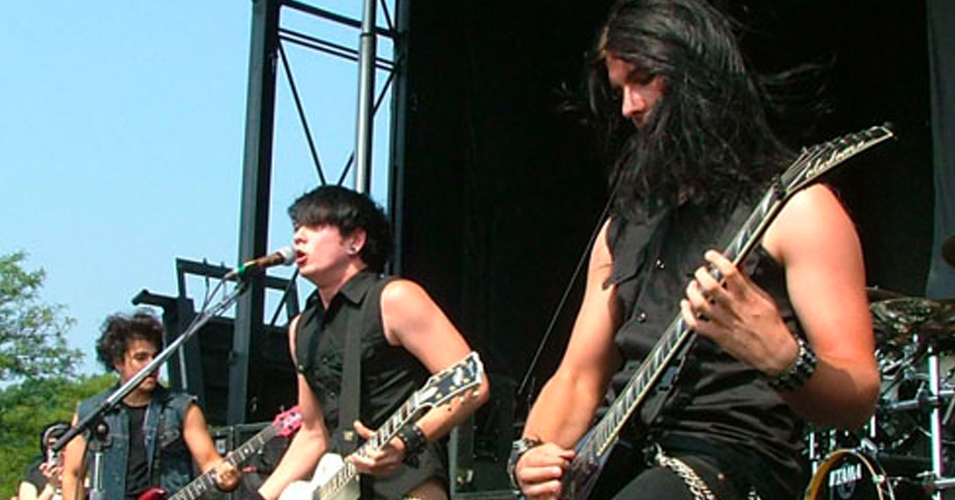 It's crazy to me to think Trivium are on the verge of being a band for over 20 years. Metal Injection, in our infancy, was one of the first outlets to cover the band, and I still have fond memories of our early interviews. We were fans of Trivium, but with a major label and a major press push christening them "the next Metallica," a backlash quickly spread, and the heat was especially hot from fellow bands who resented how much publicity Trivium were getting.

Frontman Matt Heafy reflects on the wild journey on a recent episode of Machine Head frontman Robb Flynn's podcast, No Fuckin’ Regrets. Heafy noted that things really came to a head at Ozzfest 2005, which, in addition to Trivium featured Rob Zombie, Killswitch Engage, As I Lay Dying, Mastodon, A Dozen Furies, The Haunted, Arch Enemy, The Black Dahlia Murder, Bury Your Dead, It Dies Today, Soilwork, Gizmachi, and Wicked Wisdom.

“I definitely know where the worldwide hatred of other bands towards us came from – it’s from the UK. The UK was the only time and place in our band’s history when we were a press band. It was just the UK, and it was just on ‘Ascendancy,’ and it only lasted about nine to 10 months, that was it. So for those nine-ten months, we were hailed as the ‘greatest band of all time, the best, newest big thing, the new Metallica.’

Every show – 10/10, if not 11/10, ‘the greatest thing in the world.’ But what that did, like, we were confident. Since I was 12, I wanted to be in a metal band that’s big, that can play around the world, that has fans, that makes an impact – that was my goal. And that should be a goal, and people shouldn’t be quiet about their goals; they should be wanting to do well. So we came out and said, ‘Yes, we’re going to be the next…’

I should’ve said we’re going to be the next big metal band, but instead, ‘Yes, we’re going to be the next Metallica.’ So every band in the world started seeing this as, ‘Alright, screw these guys. Screw these cocky kids. What the hell are they talking about? These guys suck.’ As quickly as we got back to the States after the UK tour, all of a sudden, all of my favorite bands we toured with, they treated us like garbage, just being bullies.

I remember ‘Ozzfest‘, some of the crew people were trying to cut us off with their golf carts and shoot dust in our face – little things like that. Or talking crap about us. One of my favorite singers of another band, I remember in a live review he was talking – and I printed this – ‘Get that Trivium shirt out of my face, get him a real shirt.’

And he brought on his band shirt and made the kid [who did the interview] give the Trivium shirt away. This was right in the magazine, in a live show. I remember seeing another like metalcore band that I love, I got the guy’s autograph in 2003, and then in 2005 he’s saying – someone asked about Trivium, and he’s like, ‘Why do I give a shit about what some spoiled, rich kid has to say about anything?’

Like, ‘Dude, I have your shirt.’ And so this was mainly like a US band thing. That was like, it was kind of spawned from that UK thing, and then next record [2006’s ‘The Crusade‘], when we came back to the UK, they called us the worst band in the world, and then all those magazines that put us in the cover put us back on the cover, saying how we’re over.

And they started ripping into us, so then we had no allies. We went from all the bands hating us because of this good press to only having the bad press, up until this record, trying to make us nonexistent. We were never mentioned, they never talked about us, they don’t promote our tour. Like, sometimes, here and there, if we give them something, they’ll give us something back, but it’s never really like the proper reciprocation."

Heafy reflected that some of the heat was indeed warranted based on bad moves made by some crew folks that worked with Trivium.

But yes, we became that band – no bands liked us. I mean, we had a couple of allies, we had you [Robb Flynn], we had Machine Head, we had… I mean, in 2005, we had you guys and that was it, but we were nice dudes. [Laughs] And I didn’t understand it. I remember even having band guys tell me like, ‘I took a lot of crap for bringing your band out here.’ Just shocking stuff. Getting bullied from my favorite bands, and it’s something we never really talked about, but we remembered it.

It sucked. The stuff that we would never want to do, but we had some lineups of questionable people that have maybe been disrespectful to other band members or crew people, and we had crew people that we later found out were bad too. So then we had a very bad reputation, like, ‘Those guys were dicks. They’re terrible human beings, they suck. They’re cocky, they’re arrogant.’

It was really around ‘In Waves,’ where that reputation started to dissipate, they were like, ‘Oh, wait a second. These guys are actually really nice, maybe they’ve been nice the whole time.’ I remember we had a crew guy that said something to [Killswitch Engage singer] Jesse Leach – he’s one of my favorite singers of all time.

He said to him – they just came off of a long van ride, and I apologized to Jesse about this – but they came off a long van ride, they came up to catering one day while we were headlining a show, they were on a headliner show in the States, that’s when he was in Seemless. He went up to catering to grab some food, and we had a tour manager go, ‘Whoah, whoah, nobody eats ’til Matt Heafy eats.’ And he sent him out of catering, and that caught like freaking wildfire.

I still hear about it. I heard about it for years and years, and still to this day. But luckily, we’ve adopted it, we’ve taken that – I have it on shirts now, it’s become a fun meme, like, I’ve taken that thing to my own. And it’s hard to know when you’re 18-19 years old, you don’t know that these people that you’ve paid to be representing you well and taking care at your show talk to people like that.

So now, we make sure anytime we see something like that, they’re gone instantly. As I said, I apologized to Jesse years later. I said, ‘Dude, whatever this tour manager did, I did not tell him to say that. I grew up listening to your music. Why would that be a thing, that I get my tour manager personally get instructed to attack you like that?’

Then people started realizing, ‘Alright, these guys are alright.’ And then it shifted, and I’m glad other bands, I don’t really see bands go through that anymore, like, you guys toured with some of these bands that are like, ‘Oh man, whoever opens up for this band gets destroyed.’

That was an era we saw in the ’90s, progressing up to 2000, and now it’s just easy, and I’m glad. I don’t want bands to get bullied as we did, I don’t want that to happen; that was so difficult, and then we quickly realized, ‘We have no allies. We have ourselves and that’s kind of it.’

There was a time where every press person was trying to destroy us, every band we grew up listening to was talking shit about us, and we had nothing but the three of us and our fans. That’s why our relationship is so strong, that’s why we give so much of ourselves, that’s why I give so much of myself.

It was weird, it was really weird; like, just the amount of bad stuff that was either conjured up from us having good press at one place or just what some of these bands are doing and saying, but we really were.

At ‘Ozzfest‘ ’05, we were public enemy No. 1, from every band just treating us like garbage, but it made us want to play harder.”

Reflecting further on Ozzfest 2005, there was one band that grew to respect them and that was Iron Maiden. This was the same year as the infamous Sharon Osbourne/Maiden egging incident.

“…We went there on ’05, so with all that happening, with all these bands bullying us, we flew to the UK, we missed a show, and when Iron Maiden left the tour. [Maiden infamously left the tour after clashes with Sharon Osbourne and their criticism of ‘The Osbournes‘ TV show saw Sharon have the band pelted with eggs and their more during a live set.]

“After that happened, we all wore Iron Maiden shirts, every single day for the rest of the tour, played ‘The Trooper‘ every day, and that’s why we had golf cart people trying to ram into us and stuff. ‘Everybody hates us already anyway, except for our fans, let’s just go out there and tell these people we don’t care.’

….like, ‘Let’s screw these people, let’s cover ourselves in Maiden stuff.’ And then Maiden brought us on tour after that. I don’t know if it’s because of that, but I know that they liked ‘The Crusade.’ I think they liked the transition to ‘The Crusade,’ they liked that kind of backing thing.

It was kind of like that era has dissipated, the bullying BS era. Now it’s just – you see little dumb beefs, but nothing serious. So I hope no young band has to go through what we went through, but it made us who we are too. It made us strong, that’s for sure, and it showed us who our real friends are.”